Guide to the less crowded, undiscovered, deserted, hidden or secret beaches in Algarve


Algarve has been one of Europe’s most popular beach destinations for decades, but still manages to hold on to a few secrets. Even more surprising is that the lesser-known beaches are some of the most beautiful in the region. Some are quite remote, but others are simply hidden between the more famous beaches. They’re perfect to get away from it all and escape the crowds, and discovering them will be among the most memorable experiences of your trip. They have no bars, no restaurants, no hotels and no lifeguard supervision, so make sure you bring enough water and snacks (don’t ever forget to take all the trash with you when you leave!) and never swim too far from the shore. 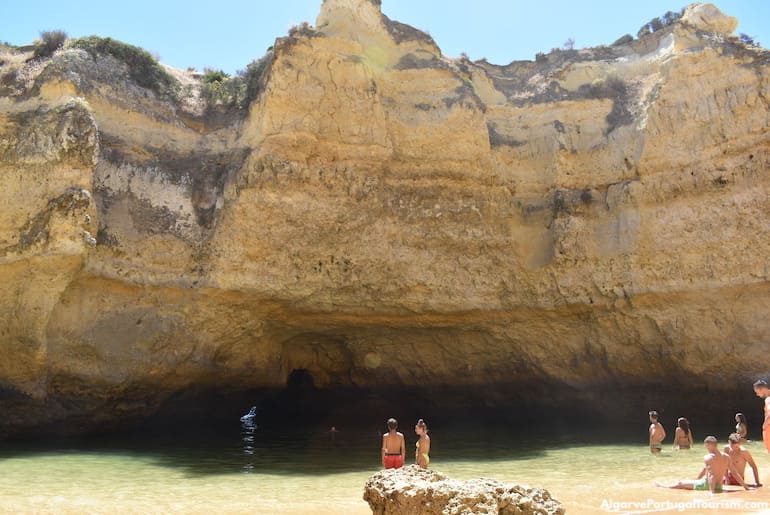 Albufeira is the tourist capital of Algarve but still has a secret beach. It’s a hidden cove that until recently was only discovered on kayak tours, but social media and Google Maps have placed it on many young tourists’ itineraries. Everyone spends most of their time looking for the right angle for selfies, as there isn’t much space for sunbathing. There are beautiful views from the top, not just over the beach but also of the Albufeira coast. If you’re looking for a romantic beach in Algarve, you’ve found one of the best. 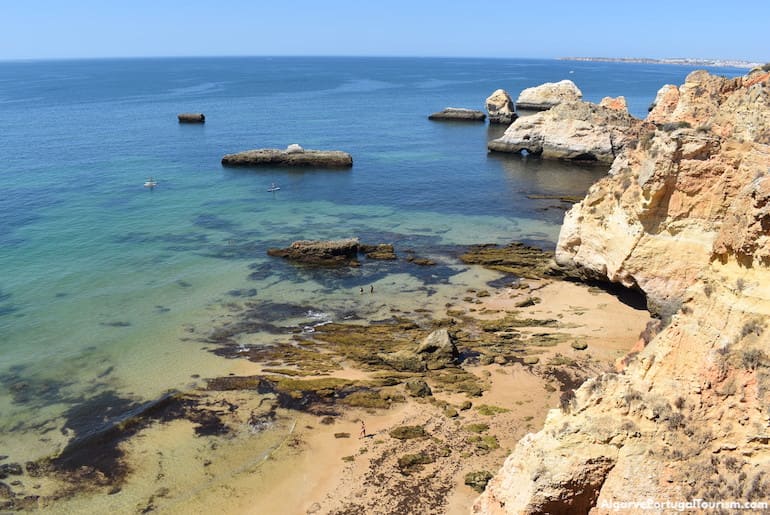 Only accessible at low tide, this is the most secret of the secret beaches. Found at the bottom of a cliff, it’s a naturist’s paradise that even most maps don’t tell you about. Named after a rock shaped like a submarine emerging from the water, it has spectacular rock formations with openings that lead to hidden caves when the water level allows it. 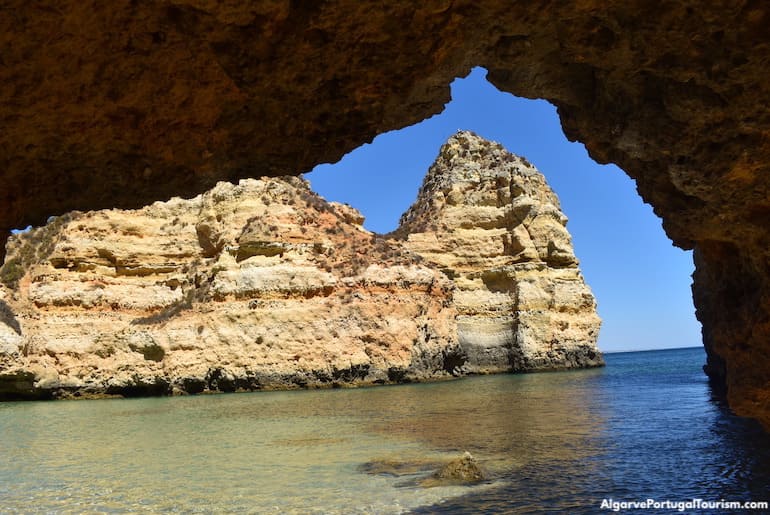 It’s located between two of Lagos’ most visited sites (the Ponta da Piedade headland and Praia do Camilo), but remains a secret. That’s because you have to follow an unmarked trail from the top of a cliff in order to reach it. It’s so secluded, most people who make it down sunbathe nude. It’s a place of extraordinary natural beauty, nestled between golden cliffs and with calm waters. 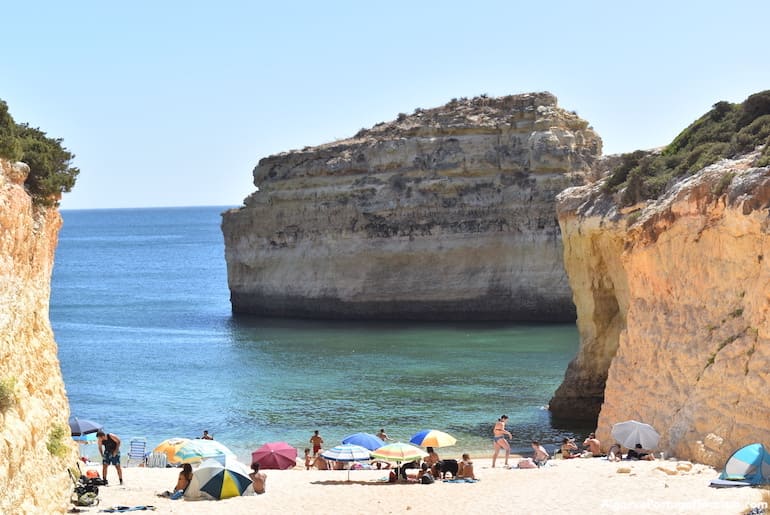 Before a resort was built nearby, this was a secret and deserted beach. Now it has about a couple dozen daily visitors, and that’s enough to make it feel crowded, as it’s quite small. Still, those are usually guests of the resort, and it remains undiscovered by everyone else. Most people find it on boat tours, on the way to and from the famous Praia da Marinha nearby. It’s reached via an unmarked path and has a magnificent scenery of pine-covered cliffs and a large islet right in front. The water is clear and calm, and good for swimming.

See the Praia do Barranquinho Guide. 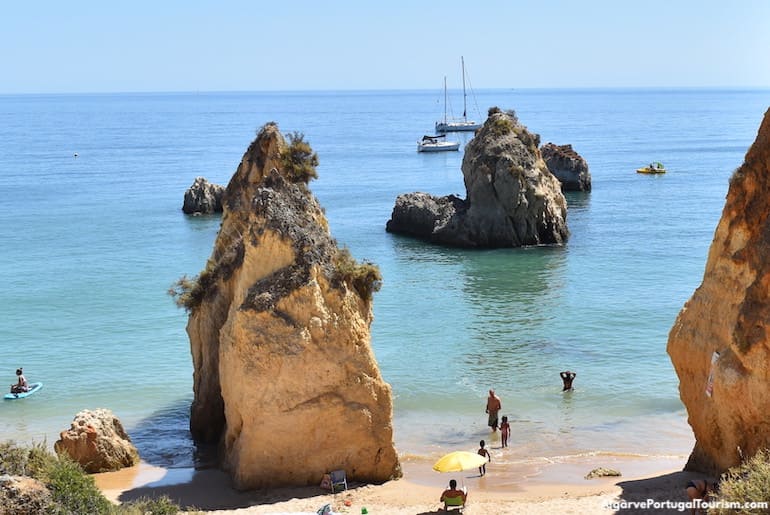 You reach this beach by walking to the western end of the relatively popular Praia do Alemão, but most of it is only accessible by boat or at low tide. That’s when you can explore a number of caves and coves that are among the most beautiful in Algarve. Here you’ll see a series of limestone rocks in the water, and at the top of the cliff behind it there’s a trail with a panoramic view of the coast, leading to other beaches to the east and west.

Location: Portimão
Where to Stay: Jardim do Vau 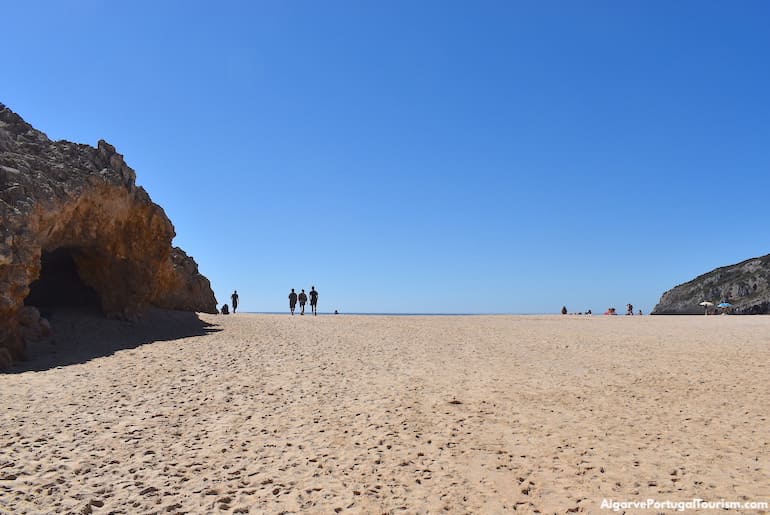 This beach is so remote, you won’t even have cellphone service. It’s reached via an unpaved road and remains a secret even to many locals. It’s essentially a beach for naturists, many of them campers who stay overnight (although it’s actually not legal to do so). It’s named after a series of caves that look carved by man, but are actually the result of erosion. The caves make it unique and worth the trip. Add the calm waters and the peaceful atmosphere, and you’ll leave wondering how it’s not one of the more crowded beaches in the region. 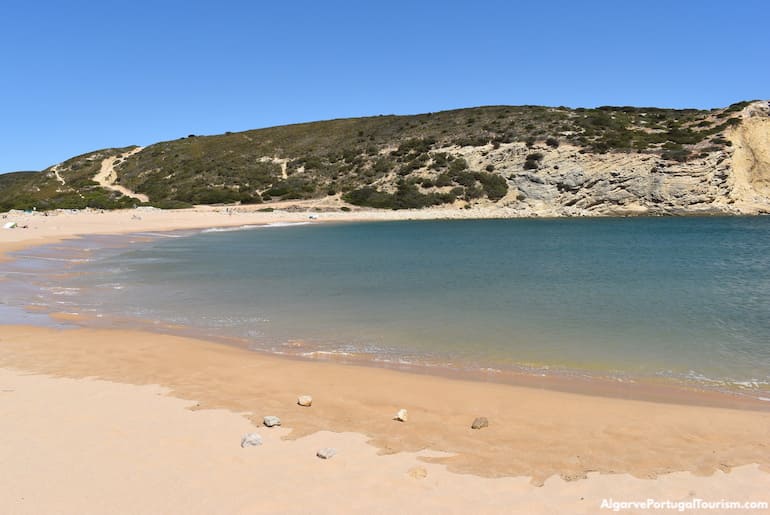 It has long been a beach for campers and naturists, but hasn’t yet been discovered by everyone else. It’s in a remote location, and to reach it you have to drive down an unpaved road. This keeps the crowds away, so it’s the perfect escape for those who prefer a wilder atmosphere. There’s nothing except green valleys, hills, cliffs and usually-calm waters around you, to be enjoyed in peace.

See the Praia do Barranco Guide. 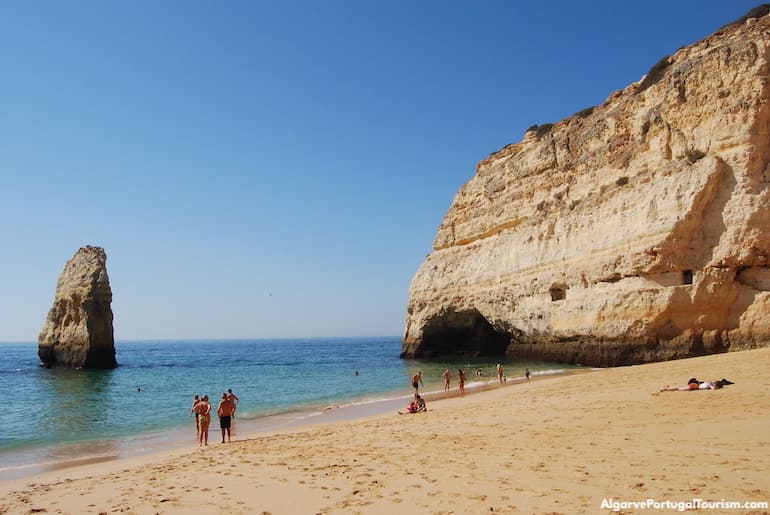 Accessed via a “secret passage” (a hidden tunnel, carved on the ground), this is one of the most romantic beaches in Algarve. It’s incredibly scenic, with a perfectly-centered rock in the water and a “window” carved on the cliff framing a postcard view. Although social media brings more people here every year, most leave in the afternoon, when half of the beach is shaded. If you stay for the sunset, you’ll experience it at its most serene and magical. 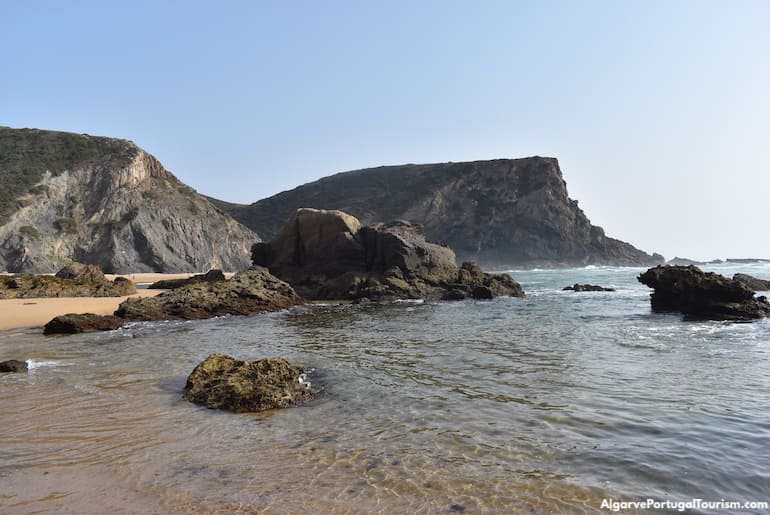 A difficult access (about 6km/3.5 miles on an unpaved road) has guaranteed that this beach remains a secret. It’s the wildest and most remote beach of all of the wild and remote beaches of Costa Vicentina, and is mostly frequented by naturists and campers. Some local families looking for lots of space for the kids and dogs to run around have also discovered it, but it remains a very quiet beach where you mostly hear the sounds of nature and admire a magnificent natural landscape. You should just avoid swimming, as the currents here are strong and there are no lifeguards. 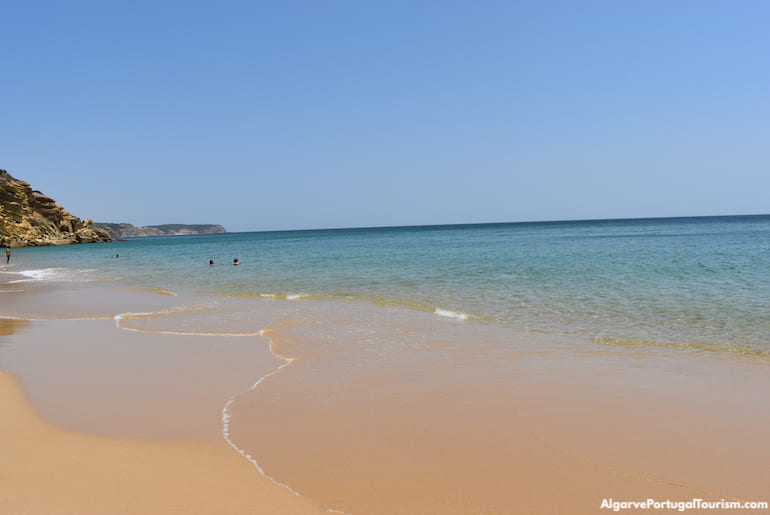 It’s quite close to the popular village of Salema, but tourists haven’t yet discovered this beach. It does attract a number of young couples, families and naturists in July and August, but remains a quiet little paradise. Cars must be parked about 800 meters (half a mile) away, and the access is via a narrow footpath. Even on the more crowded days, it offers a peaceful atmosphere surrounded by a wild landscape of cliffs with Mediterranean vegetation. 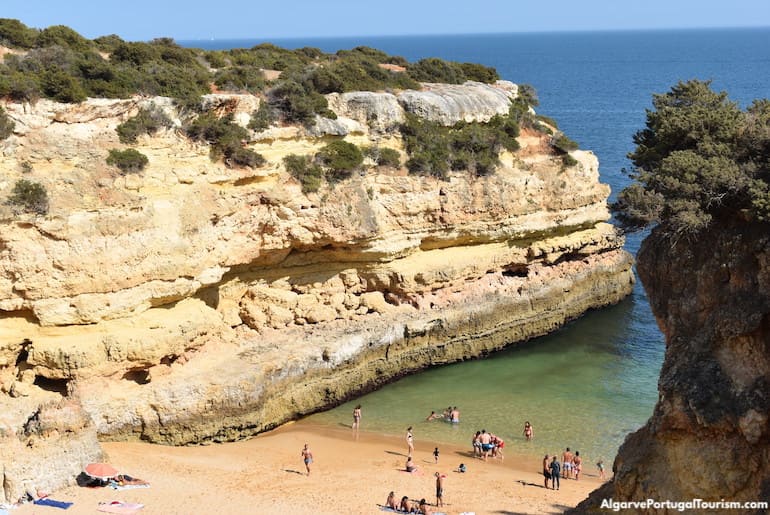 Although it’s a frequent stop for those on boat tours, it’s still a relatively secret beach. Only a few locals and guests of the hotel nearby usually come here and enjoy its calm waters, beautiful scenery, and peaceful atmosphere. If you don’t arrive by boat, you’ll need to find a trail hidden at the top of the cliff on the right side to reach the sand. The woodland above it is great for a picnic in the shade.