The best surf spots and beaches with surfing waves in Algarve


Algarve may not be a winter beach destination, but it’s a year-round surfing destination. In fact, autumn and winter are many experienced surfer’s favorite times to surf here, and Portugal is recognized as one of the world’s top surfing countries. Except for those on the west coast, the beaches of most of the region lack the waves for the sport in the summer. The waters of the main beaches are usually calm between mid-June and September, so for some surf under the warm sun, you’ll have to head west, around Sagres and Costa Vicentina. Beginners will also find gentler waves around Lagos. Here is where you’ll want to take your surfboard in Algarve: 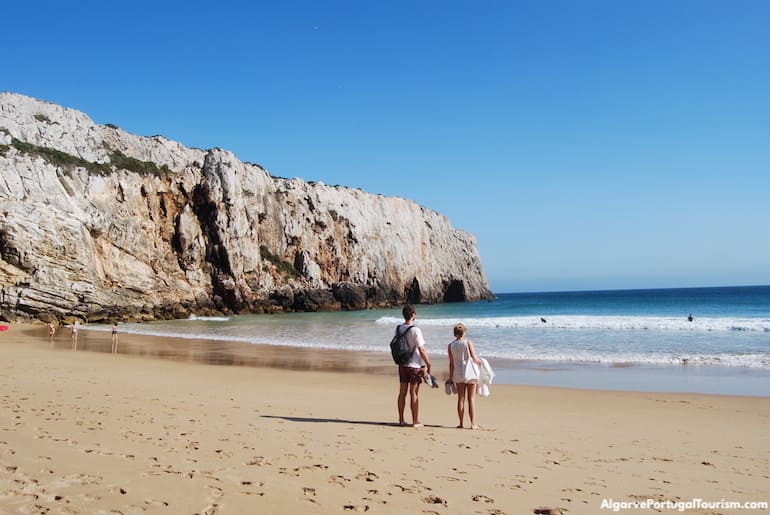 There are days when there are no waves at all, but it can be a surfing paradise throughout much of the year. This is the beach at the “end of the world,” as it’s by Cape St. Vincent, which in ancient times was believed to be the edge of the Earth. The scenery is magnificent, with tall cliffs offering some protection from the winds. A cliff divides it into two, with the eastern end for surfers and the western for naturists. It’s better suited for experienced surfers, but surf schools often bring their clients here. The access is via a long staircase, and going back up with your surfboard is quite a workout.

See the Praia do Beliche Guide. 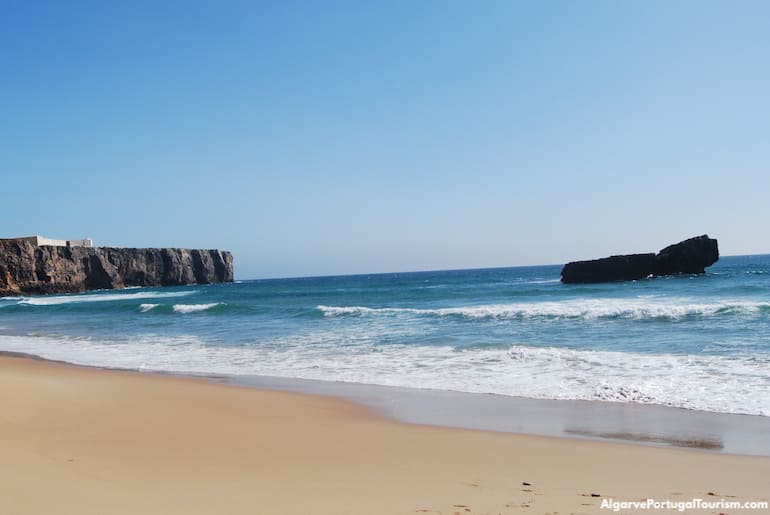 It’s very similar to the neighboring beach of Beliche, but even closer to the center of Sagres (it’s within walking distance of just about anywhere). When they’re not in Beliche, the local surf schools are here, and the calmer summer waters are ideal for beginners -- just watch out for the rocks on the western end. The powerful waves of the autumn and winter months should be for the more advanced levels only. It’s usually possible to rent surfboards and wetsuits here, but most people come prepared. It’s somewhat sheltered from the north winds by the cliffs, which offer a magnificent view from the top, especially at sunset.

See the Praia do Tonel Guide. 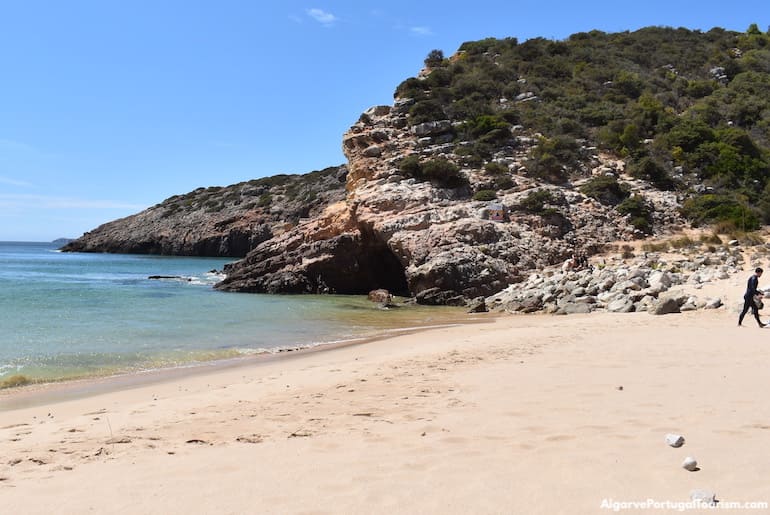 Surrounded by countryside, this is a quiet beach for surfers and naturists. Surf schools sometimes come here, but most people with surfboards are experienced foreign tourists. There are days in the summer when the sea is just too calm, so surfers remove their wetsuits and sunbathe nude. When the swell comes from the south, however, it has some of the best waves on Algarve’s south coast. The water is cold, but still warmer than at the beaches on the west coast. Stick to the left or middle sections, as there are rocks on the right side, although this is a barreling point break and great for more advanced surfers.

See the Praia do Zavial Guide. 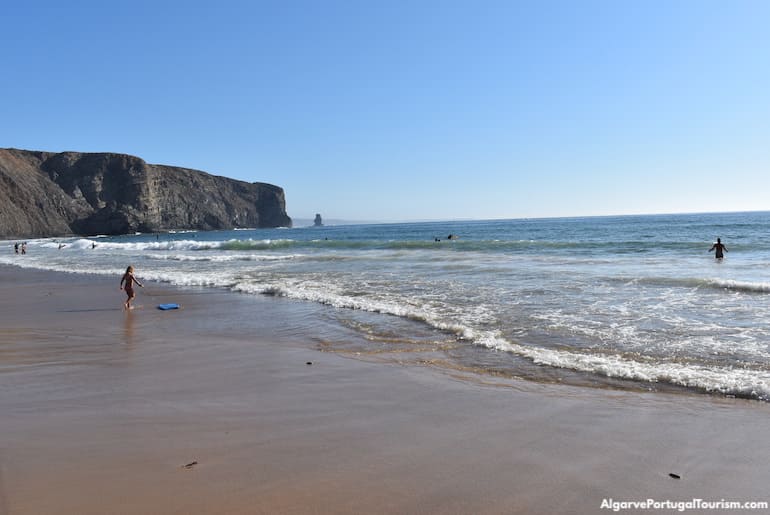 Although just about all of the beaches in Costa Vicentina are great for surfing, this one is the most popular. It’s a year-round destination, but for surfers it’s best in autumn and winter. It’s great for all levels. Those who are now just learning to surf have the assistance of a school, which also rents equipment. Pros will enjoy the powerful right hander point break on the northern end and the beach break is excellent for beginners and those with little experience. The beach is protected from the wind by tall cliffs, which offer breathtaking views from the top. 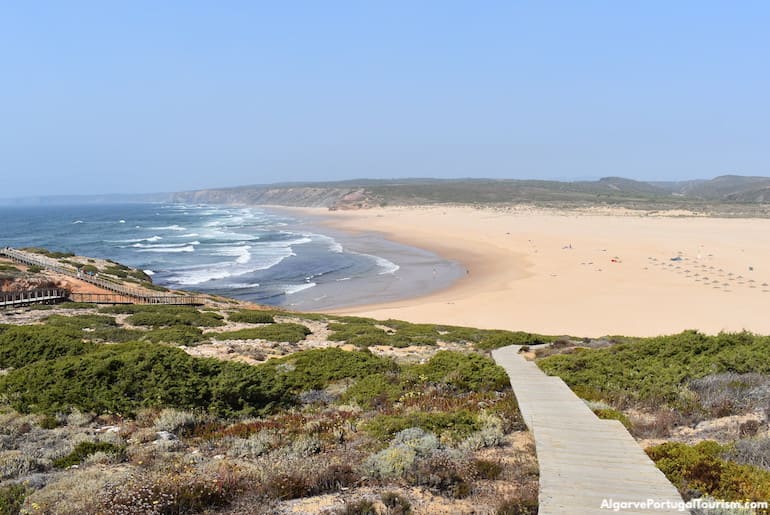 The largest beach in Costa Vicentina is mostly frequented by surfers. You often see more wetsuits than bathing suits, and there’s a school which rents equipment. The beach is very beautiful, with dunes stretching inland to the village of Carrapateira and a river forming a lagoon as it reaches the sea. The waves can be quite challenging here, even for advanced surfers, but beginners also have good opportunities to gain experience. In autumn and winter, it should be left for the pros. 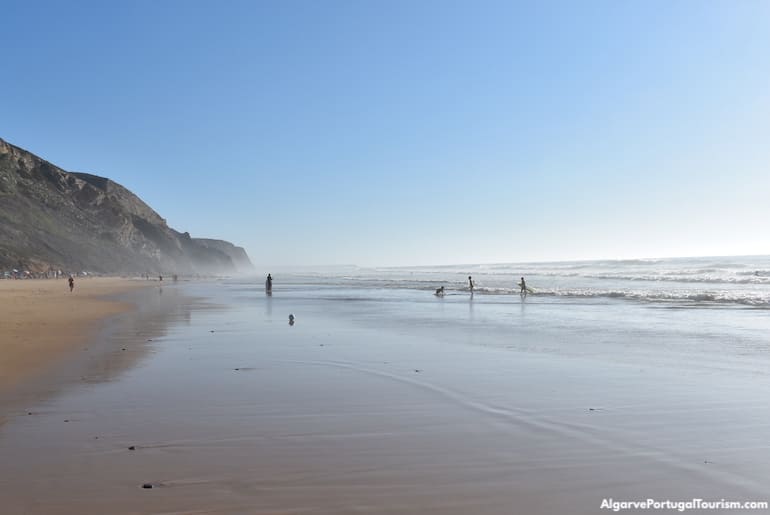 It’s located between Arrifana and Bordeira, so you know the surfing conditions are good. Surf schools bring beginners here, but it’s also challenging enough for the more experienced. It’s a quieter alternative to its neighbors, but you have to bring your own equipment, as there are no rentals or facilities here. 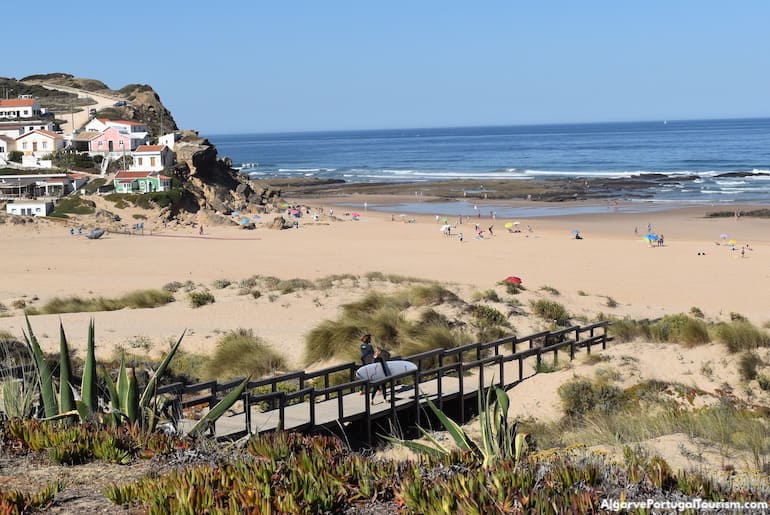 The best times to surf here are autumn and winter, when the south and southeast winds are common. There are always waves, even in the summer, and the hotter season is the best time to learn how to surf at this beach. It’s quite a picturesque place, with the houses of a hamlet cascading down a hill towards the sand. There are dunes stretching for half a kilometer, and although this is a popular destination for surfers and local families, there’s always enough space for everyone. 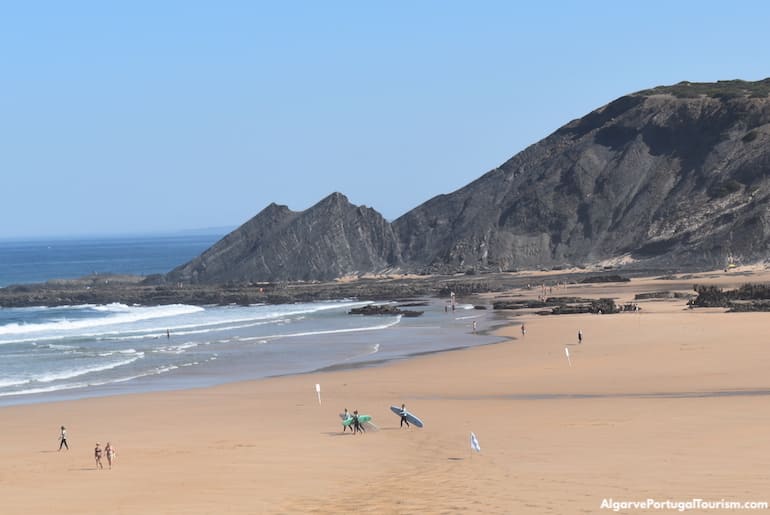 Considered by many to be the most beautiful in Costa Vicentina, this is a family-friendly beach that also attracts surfers. Parents bring the kids to swim on the calm and shallow waters of the river that meets the ocean at the beach, while surfers ride the waves of the Atlantic. The swells are good for all levels and you can rent equipment from the surf school. It’s quite a big beach, so like all others on this coast, it’s never packed. It’s flanked by cliffs and backed by dunes, and you can see it all from a viewpoint on the southern side. 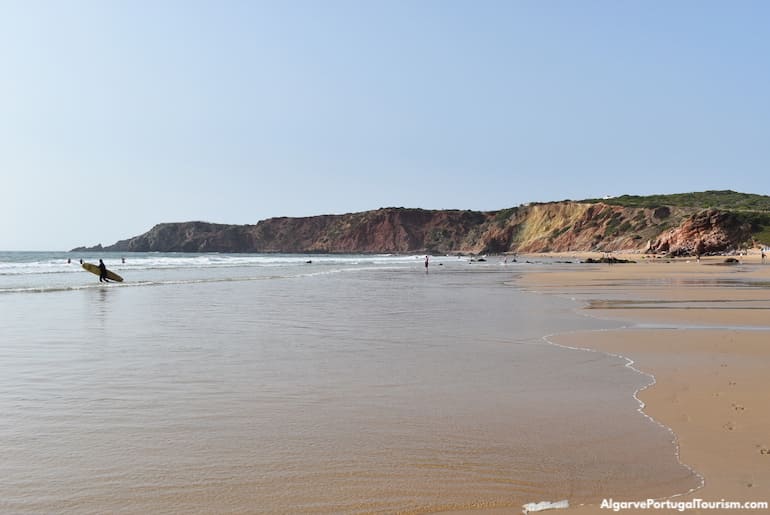 Competing with Arrifana for the title of most popular surfing beach in Costa Vicentina, this one has big waves throughout the year and has hosted national and international competitions. But it’s not just pros who come here -- beginners also find good conditions for them, except in winter, when the water is just too rough. For lessons or to rent equipment, head to one of the surf schools right on the beach. If it’s your first time here, the schools can also offer advice on the best spots and where to avoid the rocks which aren’t always visible.

See the Praia do Amado Guide. 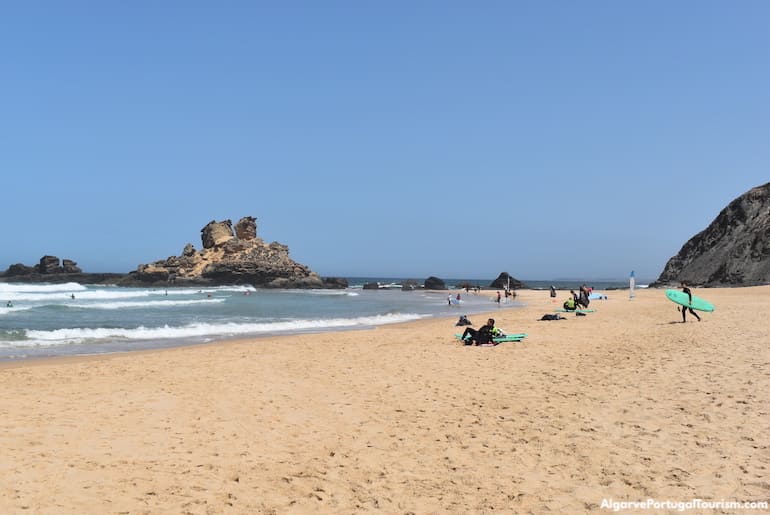 It has a surf school with rentals, but other schools from the region also often bring their clients for lessons. Here you always have waves, so it’s no surprise that it’s now one of the most popular surfing beaches in southern Portugal. It should be noted, however, that sometimes the sea is just too rough and the currents are often strong. Always follow the advice of lifeguards (in the summer) and instructors, and watch out for the rocks that aren’t always visible in the water. Nonetheless, this is a good beach for beginners or the more experienced.

See the Praia do Castelejo Guide. 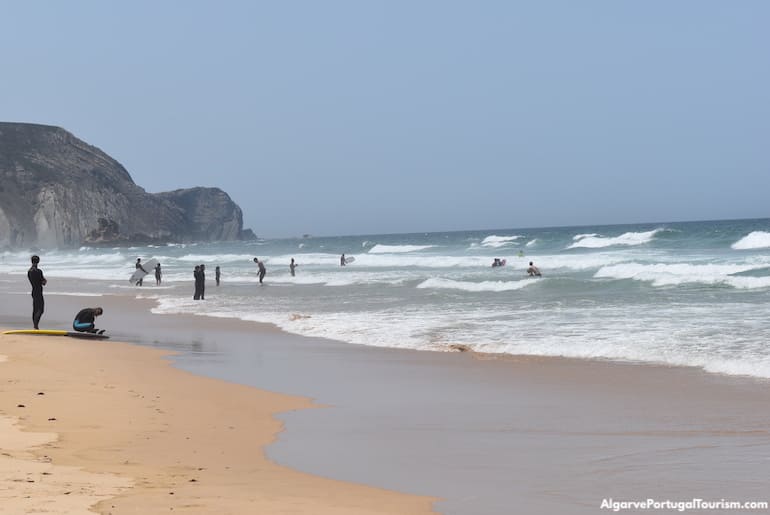 It’s right next to Castelejo, so it’s also a good beach for surfers of all levels. It’s just a little quieter and the sand is often shared with naturists. There’s a surf school in the summer, which rents equipment. 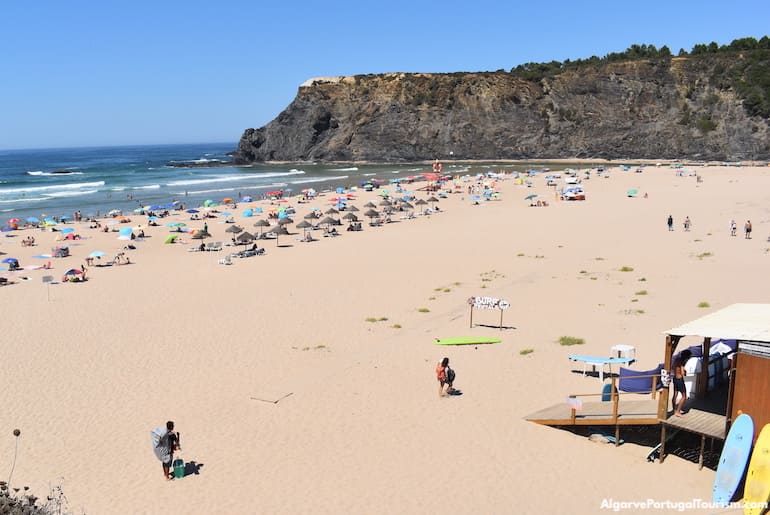 It has the calm waters of the Seixe River and the powerful waves of the Atlantic, so it’s a beach for families and surfers. It’s good for beginners, with two surf schools (the Odeceixe Surf School and Surf Seixe Academy) providing equipment and lessons for all skill levels. Unlike many remote surfing beaches on Costa Vicentina, this one has accommodation nearby.

Location: Costa Vicentina
Where to Stay: Casas do Moinho 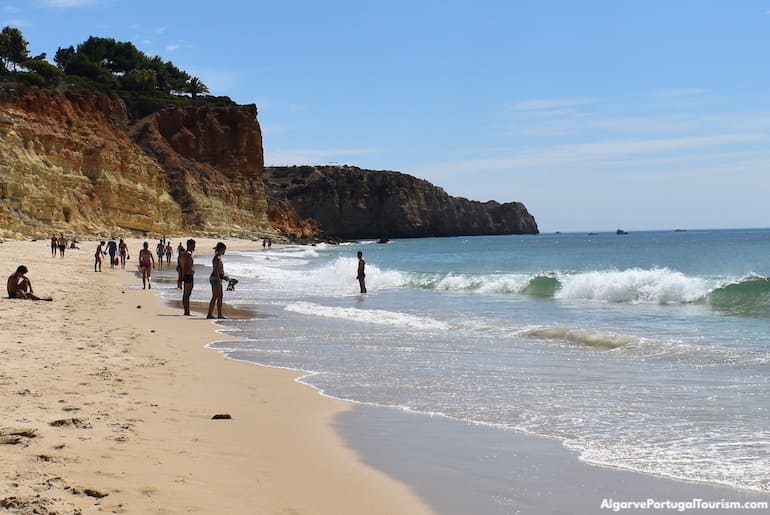 Beginners will find the waves at this beach to be just perfect throughout much of the year. Most beaches in Lagos are sheltered by cliffs and known for their towering rock formations in the water, but this one is a long stretch of sand, with calm or rougher waters, depending on the tides.