Tourist guide to Cacela Velha, one of the prettiest villages and one of the best beaches in Algarve

Cacela Velha is one of Algarve’s tiniest and best-preserved villages, and its beach one of Portugal’s best. The idyllic village stands on a hilltop overlooking the beach, which was a long peninsula until 2010, when the tides and a new inlet turned most of it into an island. 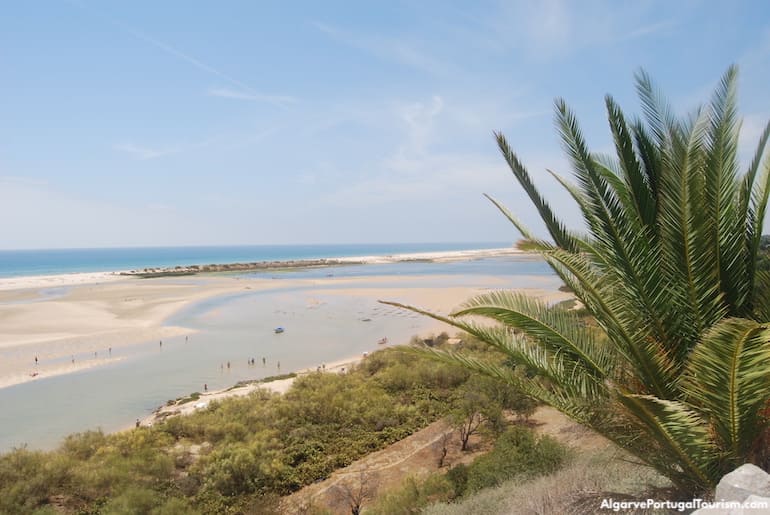 The beach is officially called Praia da Fábrica, but most people refer to it as Praia de Cacela Velha. On some maps, you’ll see it labeled as Praia de Cacela Velha on the eastern end and Praia da Fábrica on the western. For this reason, many people consider this to be two different beaches. The name Fábrica derives from a brick factory that existed on this site (to the west of the village) in the 19th century. Very few people live here, but there are a few villas and mansions where the factory once stood. One of them belongs to Claude Picasso (the son of the famous artist) and another was rumored to have been built by Teresa Heinz-Kerry, the Portuguese-American wife of former US Presidential candidate John Kerry. 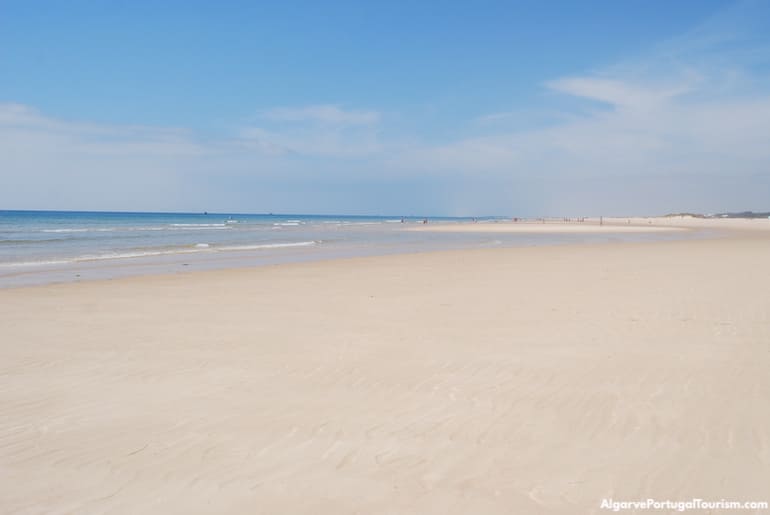 The island is part of the Ria Formosa Natural Park and one of six islands in Algarve. It’s accessed by boat from the Fábrica side (in the summer) or by walking across the wetlands from the village at low tide. There’s a wonderful view over the beach from the village, where you’ll understand why travel publications have fallen in love with it. The editors of the Spanish edition of Condé Nast Traveler magazine say this is one of the best beaches in the world and The Guardian placed it on the list of the top 10 European beaches by foot. 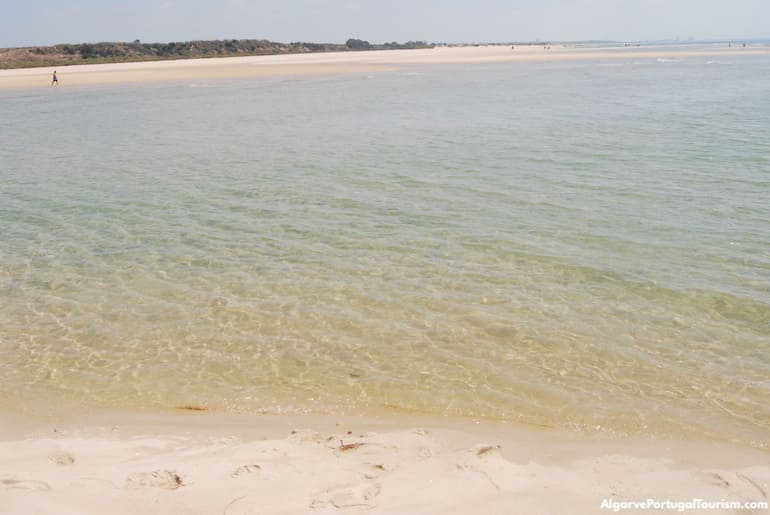 It stretches for close to 2 kilometers (over one mile) and is different every time you go, due to the tides. It’s wider in the east, and tidal pools and lagoons are sometimes formed at low tide. 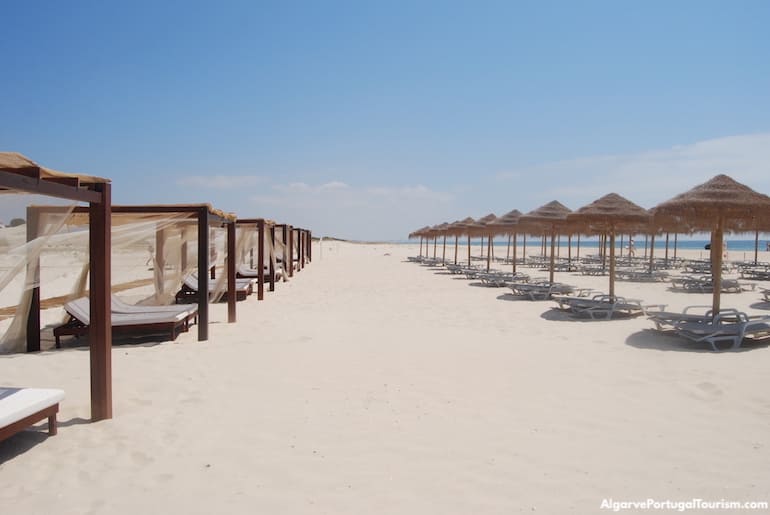 Both the village and the beach are often visited on a day trip from Tavira. Their proximity to the border (about 20 minutes away) means that they’re also a popular destination for Spanish tourists. Still, the beach is surprisingly never crowded. You’ll always have a peaceful and calm atmosphere, and it may feel like a desert island, even with the view of the village and growing number of visitors. In the more deserted areas, people have traditionally sunbathed nude, but that’s now rare. Nevertheless, the Portuguese Naturist Federation recommends it as a naturist-friendly beach. Now it’s mostly frequented by families, since the calm and shallow water is safe for children. The average water temperature is a little higher than elsewhere in Algarve, so it’s good for swimming. 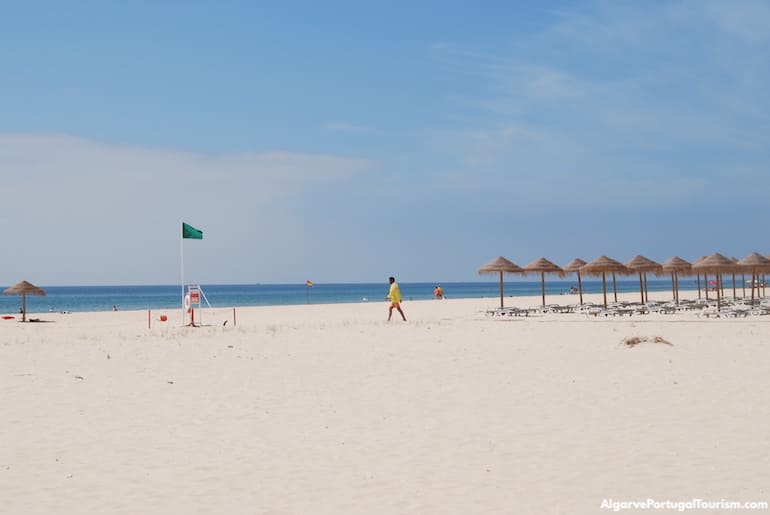 The Fábrica/western end has lifeguard supervision and parasols and sunbeds for rent. There are no restaurants, but there’s a small bar with refreshments by the parasols. You might still want to bring enough water and snacks if you’re staying the whole day. 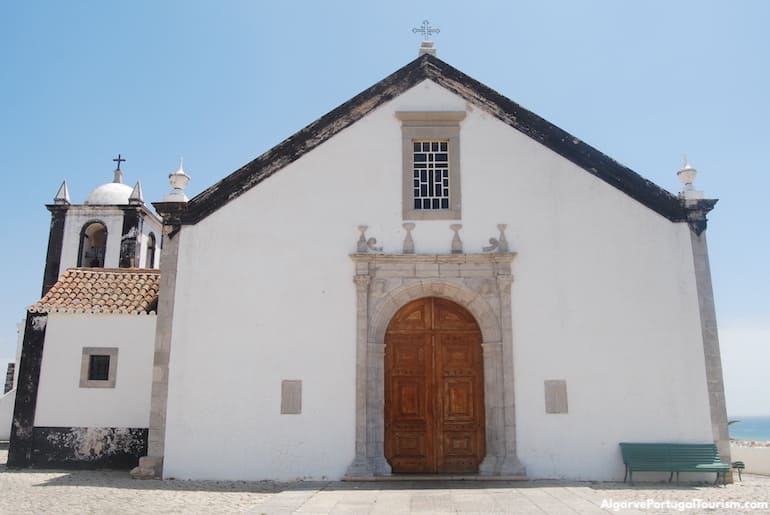 Before or after the beach, stopping at the village is a must. It’s a delightful and scenic little place, with just a small church, about a dozen houses, an 18th-century fort, and the wonderful panoramic view over the beach. It’s so small, that walking around all of its cobbled streets would take you just about 15 minutes. 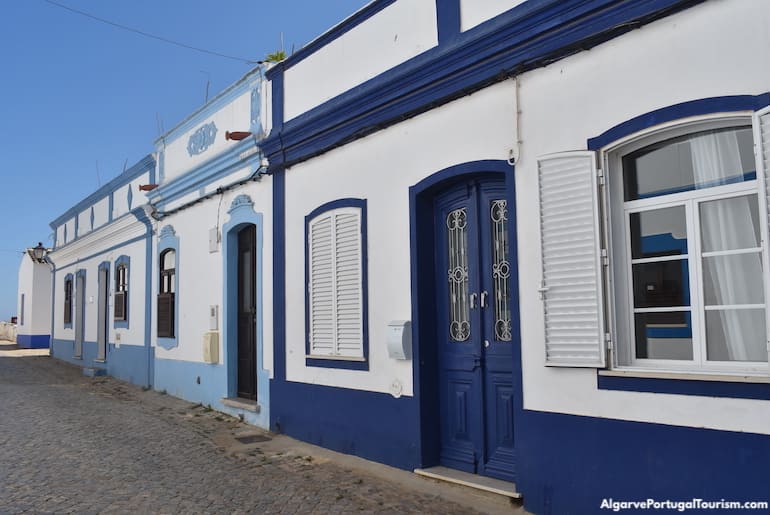 The church is called Igreja Matriz de Cacela Velha and dates from 1583. It was damaged in an earthquake in 1755 but maintains the original Renaissance portal. If you visited Tavira, you might notice a resemblance to that town’s Misericórdia Church, and the reason is that both were designed by the same architect. Behind it is the fort (“Fortaleza de Cacela”), built in 1770 over the ruins of a Moorish castle. It’s currently occupied by the National Guard, so it’s not open to the public. 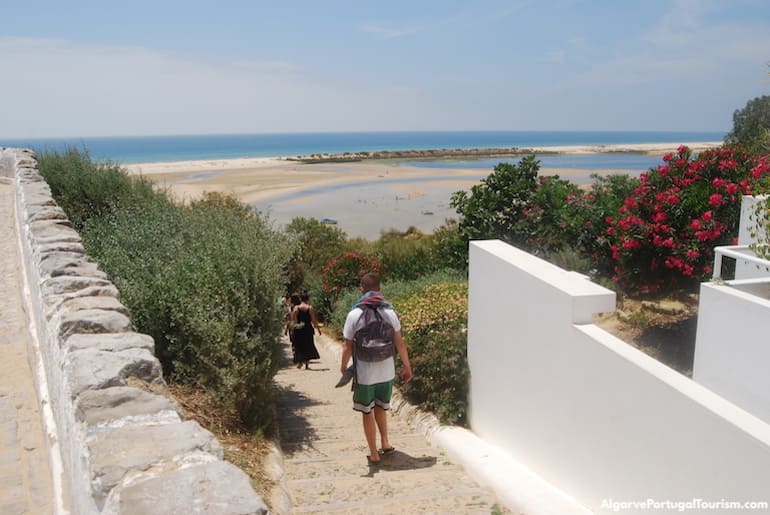 How to Get to Cacela Velha

Bus 67, operated by Vamus, runs between Faro and Vila Real de Santo António, stopping in different locations on the way, including Olhão, Tavira, Cacela, and Monte Gordo. From Faro to the stop in Cacela Velha it takes 1 hour and 15 minutes, from Olhão it’s about 55 minutes, and from Tavira just 15. The stop is on a road where you see a sign pointing to the village, and from there you need to walk straight ahead for about 15 minutes.
By car it’s also just 15 minutes from Tavira, heading east on road N125. From Olhão it’s about 35 minutes and from Faro about 45, on highway A22 and then road N125. You’ll see a large parking lot right by the village.
There’s a train serving the Cacela Velha area, but the station (named “Cacela”) is about 4 kilometers (2.5 miles) from the village. That means you’d have to walk for about 45 minutes or be lucky to find a taxi nearby. There are about a dozen trains per day, from Faro, Olhão, Tavira or Vila Real de Santo António.
If you’re visiting from Tavira, you might also choose to go by Uber, which should cost 8 to 12 euros.
Once at the village, wading or walking through the wetlands to the beach on the island can take between 5 and 10 minutes. The water is very shallow, rarely going beyond knee-deep. The deepest it can get is about chest level, but on those days most people choose the boat instead. It’s a small fishing boat departing from Rua de Fábrica, which is about a 15-minute walk from the center of Cacela Velha. There’s also a small parking lot here (go early or you’ll find it full). There are no scheduled times for the boat departures. They’re available between May and October, from 9am to the evening (6pm, 7pm, 8pm or 8:30pm, depending on the month), and depart when there are passengers. They take less than 5 minutes to reach the beach.
It’s also possible to walk from the beach of Manta Rota to the east, but only to the eastern side. The main, western part by Fábrica is surrounded by water and inaccessible on foot from there.

Manta Rota is the first beach to the east, less than 10 minutes away by car. To the west is Ilha de Cabanas, another island with a huge sandy beach. That island is reached by boat from Cabanas de Tavira, which is less than 15 minutes away. 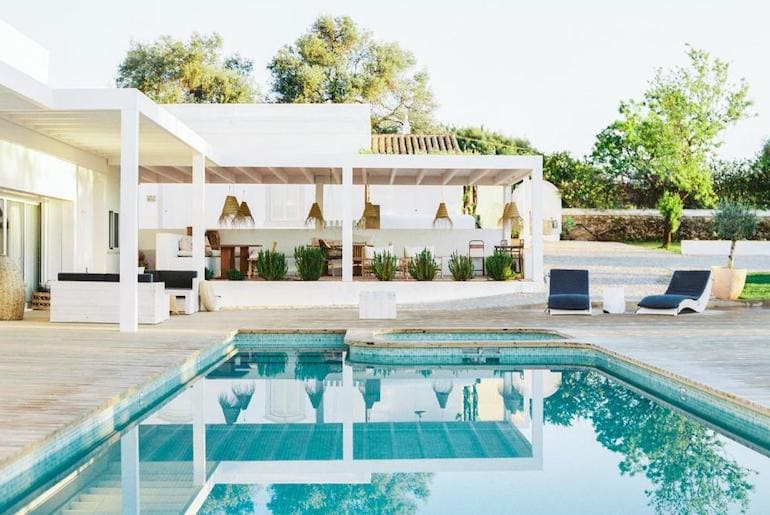 This beautifully-designed boutique hotel is surrounded by countryside, about 5 minutes from Cacela Velha. It mostly consists of stylish suites facing an outdoor pool, but there’s also a unique and romantic tree house. It serves a good organic breakfast from local producers. 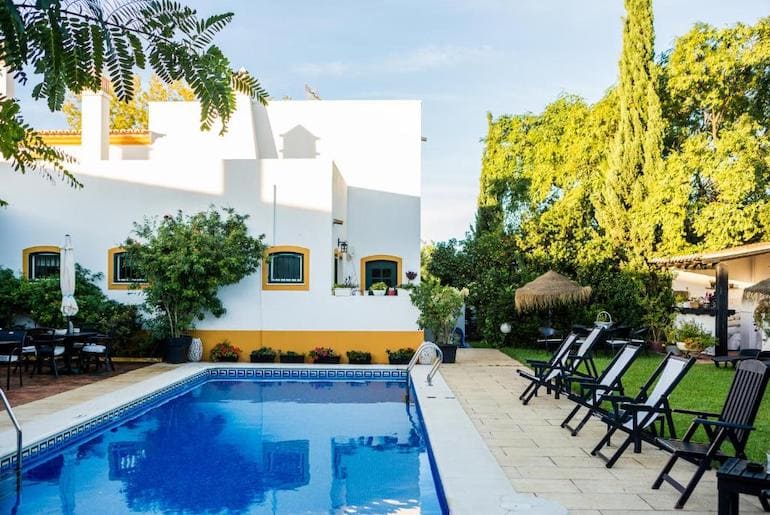 This farm house is in a peaceful location just 5 minutes from Cacela Velha. It mixes traditional Algarve architecture with classic, rustic and contemporary furnishings, and features a garden with orange and olive trees. Outside is also a swimming pool and a patio where breakfast is served. 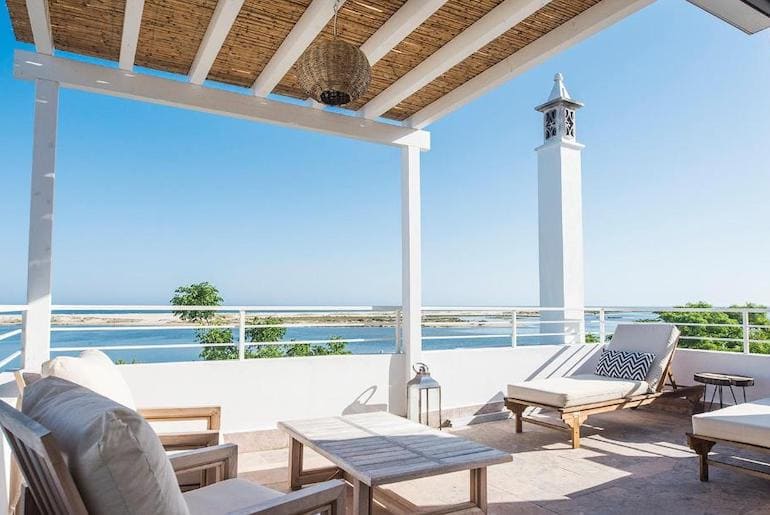 You can’t get any closer to the beach -- it’s located where you can hop on the boats and there’s a sea view from the top floors. It’s divided into contemporary apartments with equipped kitchens, and there’s an outdoor swimming pool. 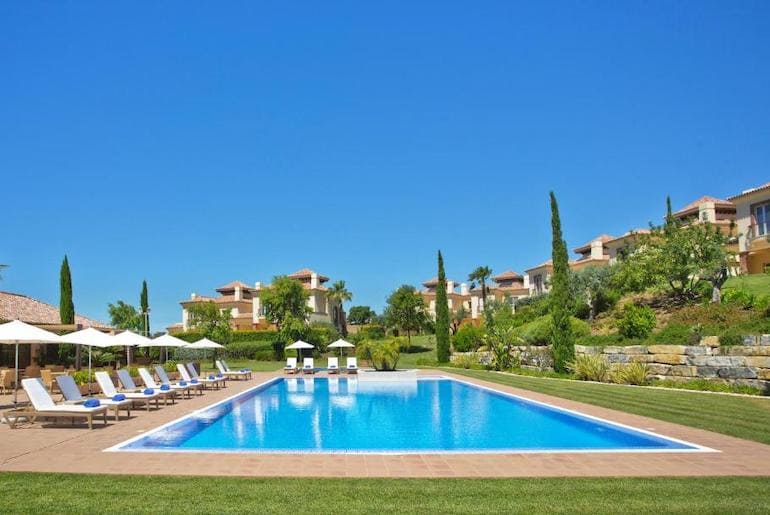 About 15 minutes to the north of Cacela Velha, you find this luxury resort with spacious villas and apartments. Perfect for families or groups, it overlooks one of Portugal’s best golf courses and has a Michelin-star restaurant, a heated swimming pool for adults and another for children, a fitness center and a spa. In July and August, it offers a beach shuttle. 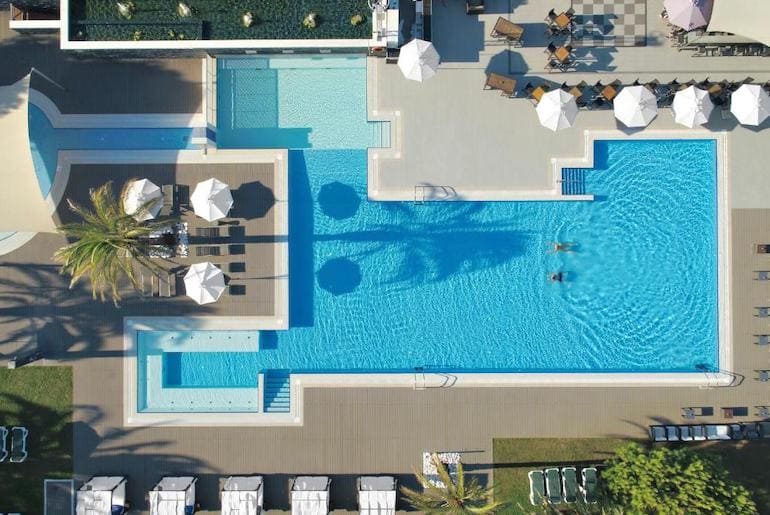 You can be on a boat to Cacela Velha beach in less than 10 minutes from this hotel. It has different types of accommodation -- standard and economy double rooms, suites, and family rooms. It’s very family-friendly, with adults’ and children’s pools and a kids’ club. For the adults there’s a health club with an indoor pool, a spa, a gym, tennis and volleyball courts, and a soccer field.