Portimão beaches guide with the most recommended and most beautiful beaches 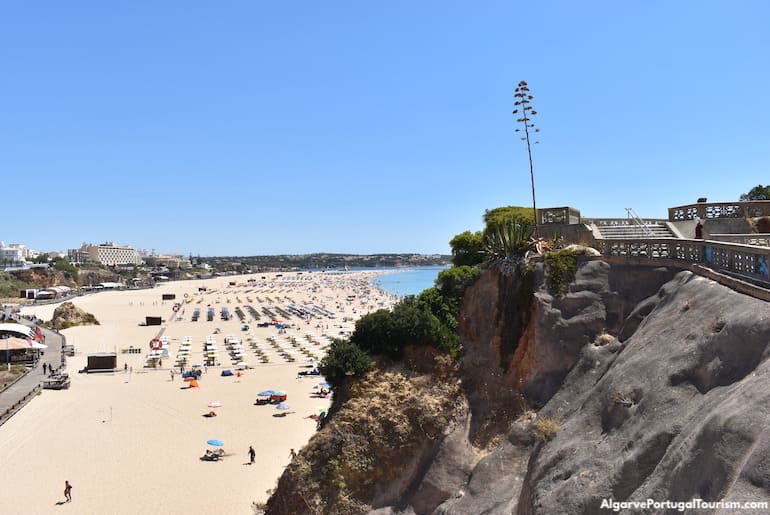 Due to its beachfront accommodation and long coastline, which stretches for 8km (5 miles) from the Arade River estuary to the bay of Alvor, Portimão is one of Portugal’s top summer destinations. The beaches closer to the center can get crowded, but they’re quite long and there are always plenty of more secluded spots a short walk away. That means that whether you’re looking for a lively or a quiet atmosphere, Portimão is for you. Most beaches are backed by cliffs and are some of the most scenic in Algarve.

Following promenades, the coastal road and the clifftops, you can walk from Praia da Rocha in the east all the way to Praia de Alvor in the west in 90 minutes. Although that’s not a walk for everyone, most people will enjoy going for a shorter walk (40 minutes) between Praia da Rocha and Praia de Boião. The stretch between these two is considered that of central Portimão, while the one between Praia de João de Arens and Praia de Alvor is considered part of the district of Alvor. 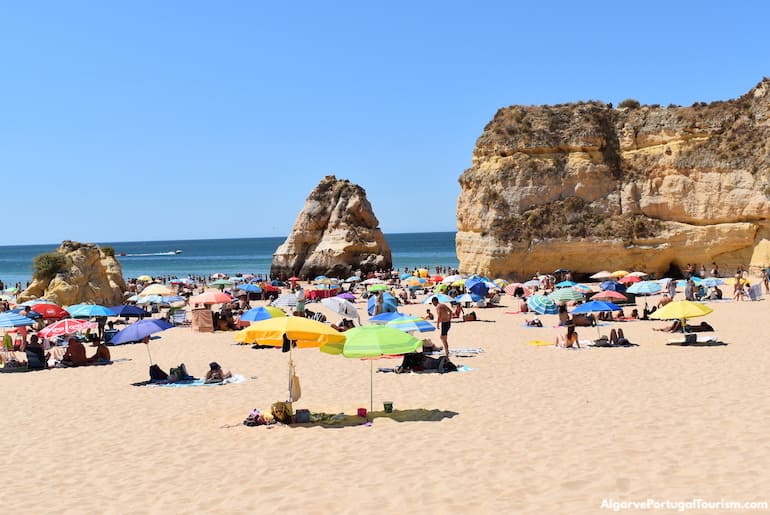 It’s the main beach in Portimão and one of the most famous in all of Portugal. It’s quite long and wide, and named after the rock formations on and by the sea. Behind it are tall buildings with restaurants, bars, clubs, shops, hotels, and even a casino, giving it a skyline that’s more Miami Beach than a traditional Algarve town, but that makes it one of the liveliest in the region. From a clifftop viewpoint on the western side or a 17th-century fort on the eastern end, you have a panoramic view and the perfect backdrop for photos. 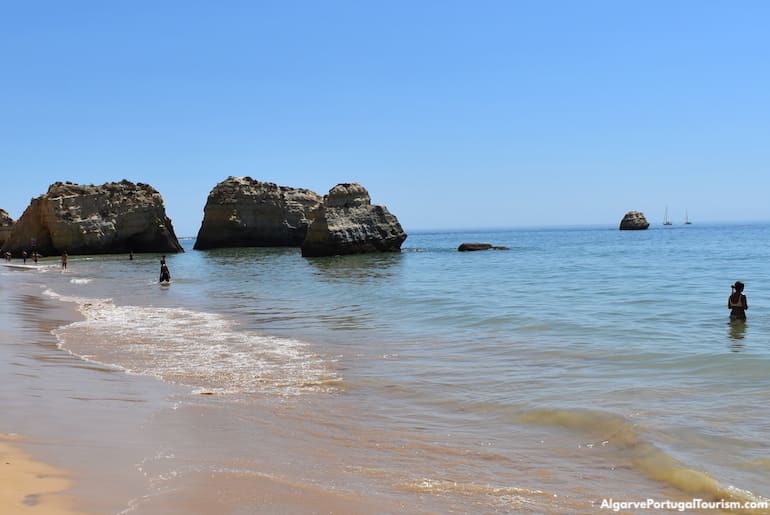 This beach is separated from Praia da Rocha by a cliff, which has a viewpoint offering a view over both beaches. The access down to this beach is via a staircase by the viewpoint. It’s named after a trio of large rocks in the water, and due to its proximity to Praia da Rocha, is the second most popular in Portimão. However, it’s never as crowded, and the further west you walk, the more space you have for yourself. It’s a good beach for swimming, due to the usually calm waters, especially when the tide is low. For this reason, it tends to attract families. 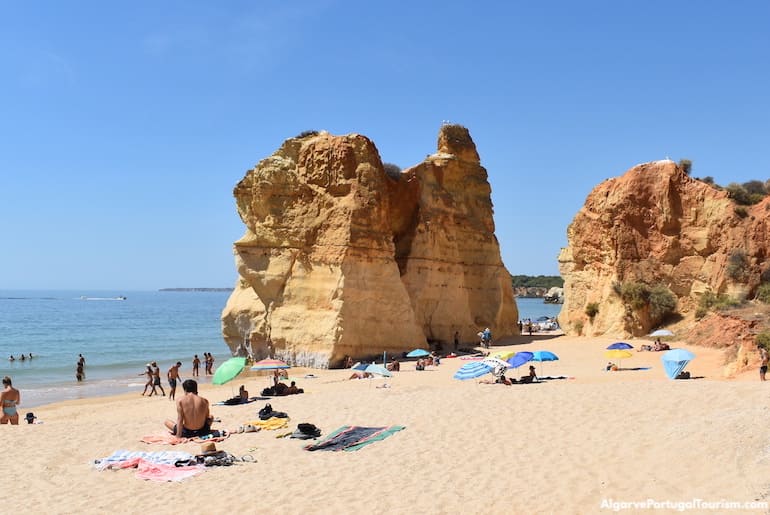 It shares the same stretch of sand as Praia dos Três Castelos, but is usually quieter. There’s no bar, no parasols for rent and no lifeguards on duty, just a natural scenery of towering rocks on the sand and the sea. It’s quite a beautiful beach, and you can admire it from above, on the promenade at the top of the cliff.

See the Praia do Amado Guide. 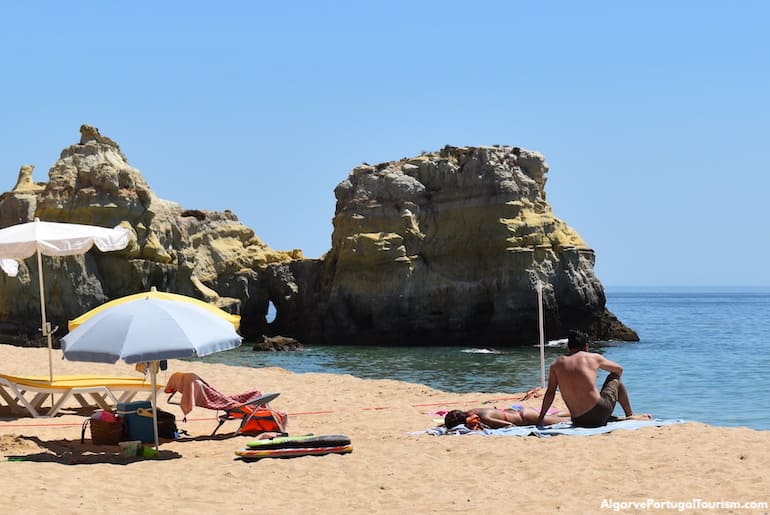 This beach is hidden at the bottom of a cliff and is one of Portimão’s smallest. It’s for those who don’t want to be far from the center but prefer to escape the crowds. It’s accessed via a steep staircase, so it’s not for those with mobility issues. The water is usually calm, making it safe for children. The trail over the cliff above offers a view of the entire coast. 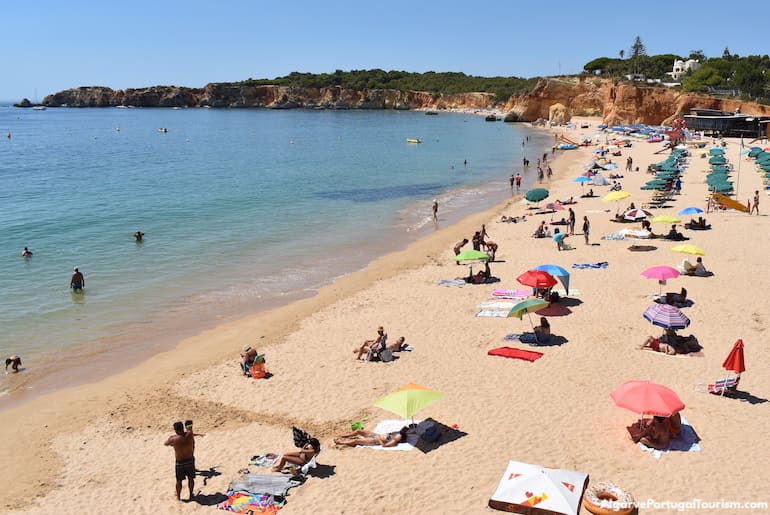 A favorite of local families, this beach can get crowded in the summer, but still manages to maintain a relaxing atmosphere, thanks to its natural scenery. It has the typical ocher cliffs of this coast on one side, and a pine-covered promontory on the other. Many people end up renting pedal boats and stand-up paddle boards, as the sea is usually calm. A wooden walkway climbs up the cliff behind it, leading to other beaches to the west, but also offering a stunning view over this and the neighboring beaches. A ramp makes this beach accessible to those with mobility issues.

See the Praia do Vau Guide. 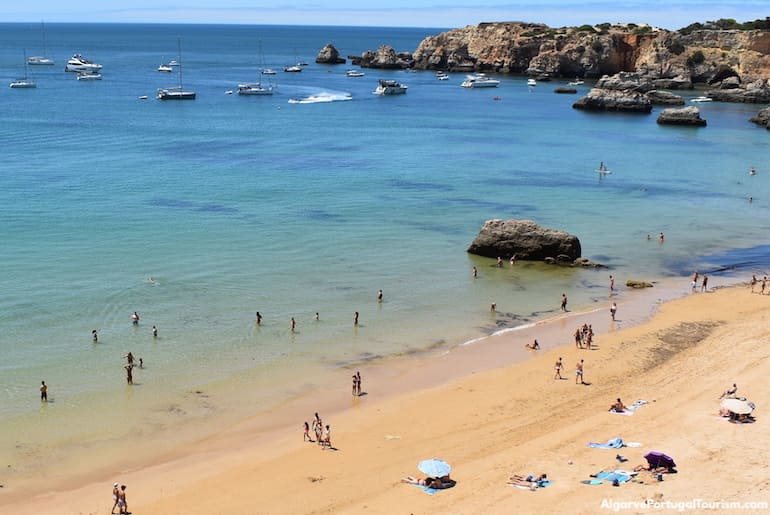 It’s officially named Praia do Barranco das Canas, but everyone calls it Praia do Alemão (“Beach of the German”) because of a German man who was the first to build a home in the area. It’s one of the most unspoiled and beautiful beaches in the region, especially when seen from the clifftop. There’s a trail offering views all the way to the center of Portimão, and over the series of rocks emerging from the water. The beach is very clean, with golden sand and calm waters, sheltered from the winds by a promontory to the west.

See the Praia do Alemão Guide. 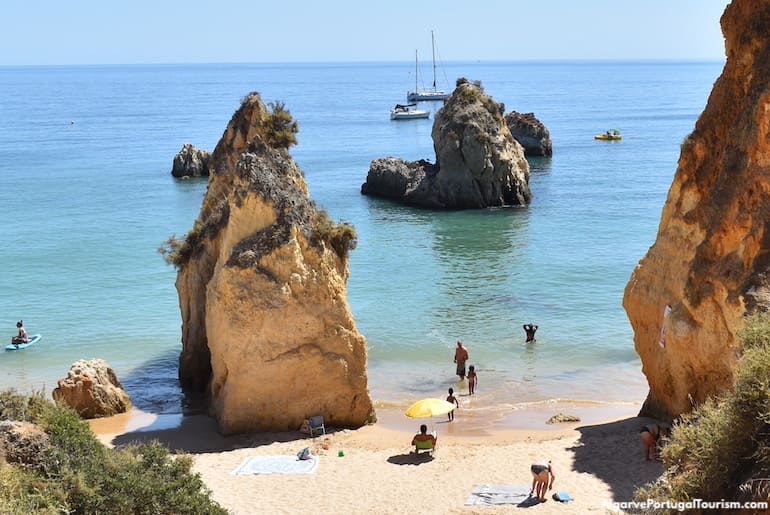 The western end of Praia do Alemão becomes this beach, which is only separated from its neighbor at high tide, when the water reaches a cliff ledge. When the tide is low, it’s possible to explore secret caves and coves, which are usually only accessible by boat. Snorkelers take advantage of the clear water, and children play in the shallow areas, but this tends to be a quiet beach. Here you have a closer view of the limestone rocks in the water, which were shaped by the waves and the wind over millions of years, but that look like they were purposefully placed here. For a view from above, follow the trail at the top of the cliff. 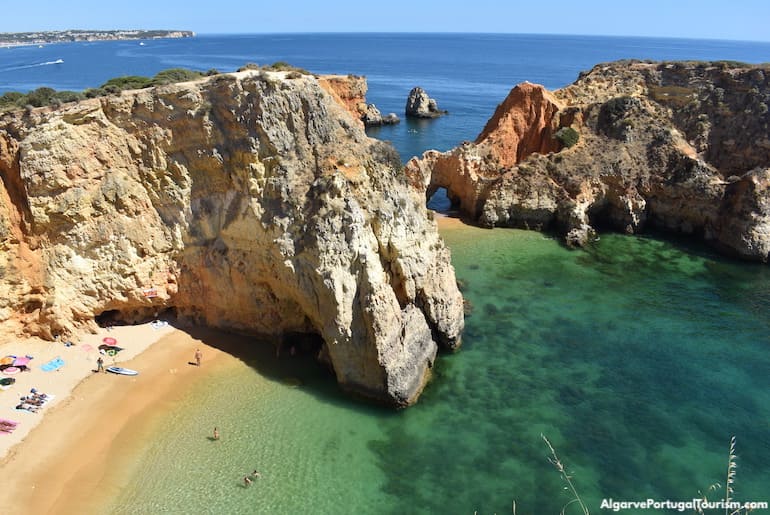 Hidden at the bottom of a cliff, this has become a rather popular nude beach. To find it, you have to follow the edge of a pine-covered promontory and then a trail down to the sand. Before you do that, take some time to admire the magnificent views from the top. The beach is mostly frequented by young couples (straight and gay), and many of them spend a lot of their time in the usually calm and clean water, swimming, snorkeling or on inflatable boats. 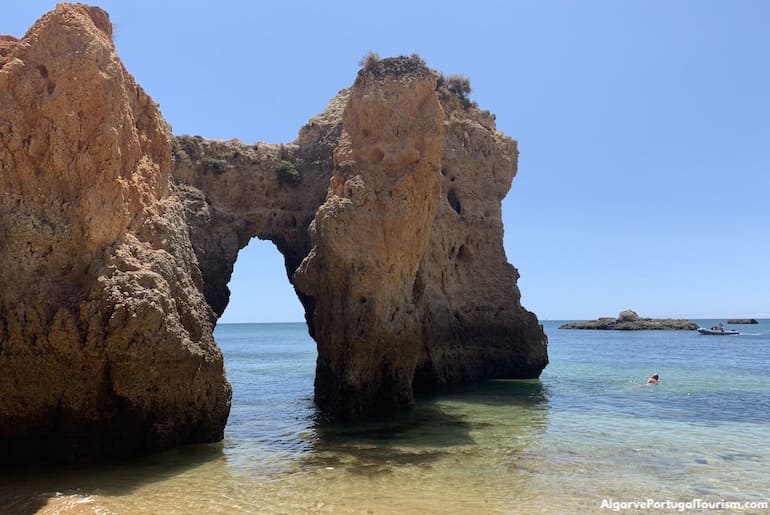 Named after a rock shaped like a submarine emerging from the water, this is a “secret” beach next to João de Arens. It’s also frequented by naturists or simply those who want to relax surrounded by pristine nature. The access down the cliff isn’t for everyone, and when the tide rises the beach disappears. But when it’s possible to go down to the sand, a number of arches and other openings carved by nature lead to a wonderful series of coves and caves. 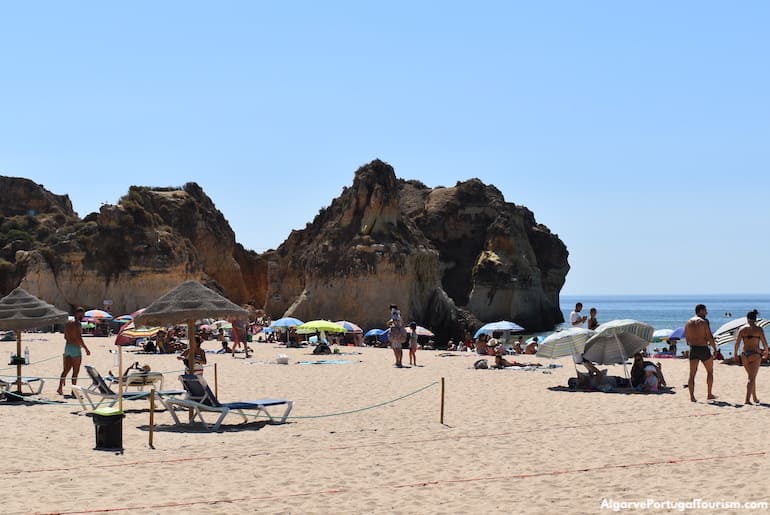 The most popular beach by Alvor is a long stretch of dunes to the west and characterized by a series of tall rock formations to the east. The scenic beauty is what attracts everyone here, but the hotels in the vicinity also bring a significant number of tourists. It’s a favorite of families, and kids often play in the shallower waters around the rocks. Those who prefer a quieter atmosphere, stay on the dune-backed western side. There are a couple of restaurants right on the beach, for meals with sea views. 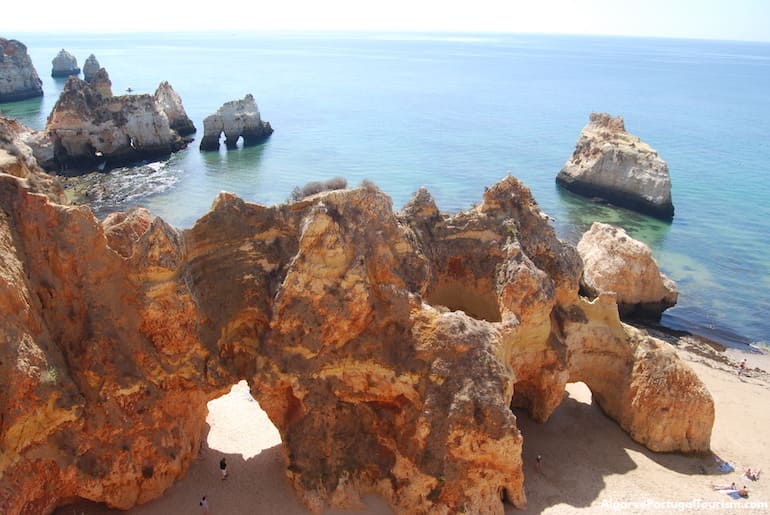 A cliff and tall rocks separate this stunning beach from Praia dos Três Irmãos. It’s a series of caves and rock formations that makes it one of the most beautiful and romantic beaches in Algarve. When the sea is calm, it’s great for swimming. Don’t leave without admiring the breathtaking view from the clifftop. 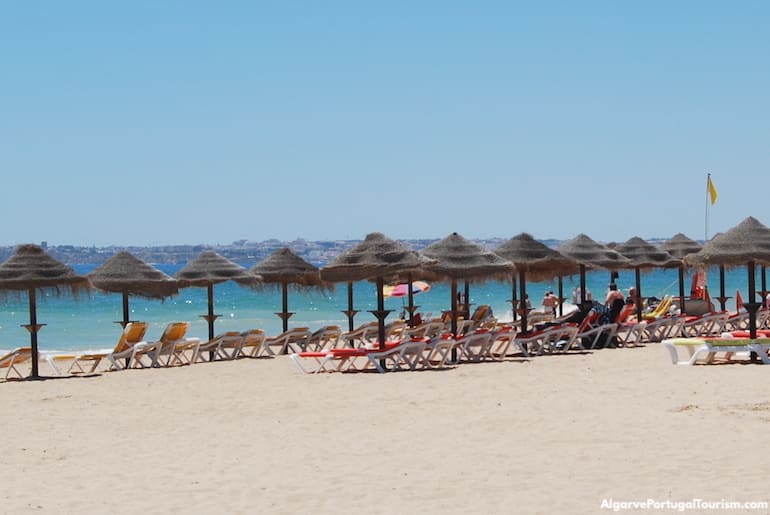 The largest beach in Alvor stretches for 2km (over 1 mile) and is backed by dunes. It’s the only one in the Portimão region that doesn’t have the massive rocks and cliffs. Although it can get crowded in the middle section (it’s popular with local families, and the hotels in the vicinity bring plenty of tourists), to the west it offers more space and quiet. A boardwalk nearby goes through a nature reserve, allowing visitors to get close to a variety of fauna and flora.