Sagres beaches guide with the most recommended and most beautiful beaches 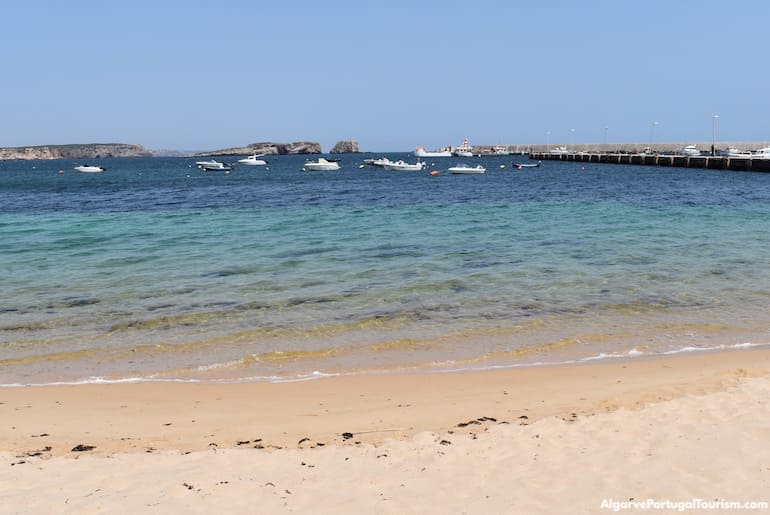 Sagres is home to some of Algarve’s most stunning beaches, surrounded by towering cliffs and natural scenery protected as part of the Costa Vicentina natural park. Three major ones (Praia da Mareta, Praia do Tonel and Praia do Martinhal) are within walking distance of the center of town (the harbor also has a small stretch of sand known as Praia da Baleeira, pictured above), and the others are a short drive away. Many are among the best for surfing in southern Portugal and all are much quieter than practically everywhere else in Algarve. There are surf schools in town offering classes to beginners and renting equipment to anyone who needs it. Those who don’t come for the surfing come for the peaceful atmosphere and the unspoiled landscape. Although none are officially naturist, half of them are recommended by the Portuguese Naturist Federation as clothing-optional. The area is very windy, but some beaches are relatively sheltered. The most sheltered one is Beliche, which is arguably also the most beautiful. The best one for families is Praia do Martinhal. The water is quite cold, so you won’t spend much time swimming. In the summer it’s usually 19C to 22C (66F to 72F), while in the winter surfers must endure 15C (59F) waves. 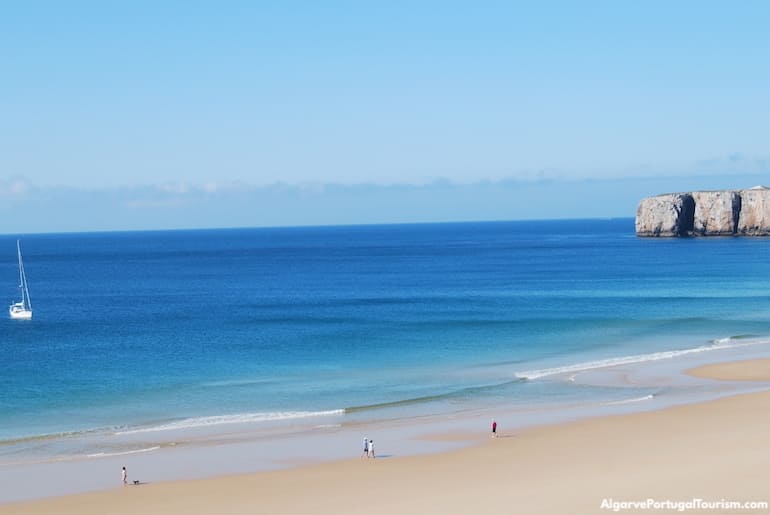 Sagres' largest and most central beach is also the southwesternmost in Algarve. It’s less windy and its waters calmer than at other beaches in the town, thanks to the surrounding cliffs. The one on the western end is the promontory topped by the Sagres Fortress. It attracts families and is good for swimming, diving, and kayaking. Outside the summer, it’s also a destination for those learning how to surf. 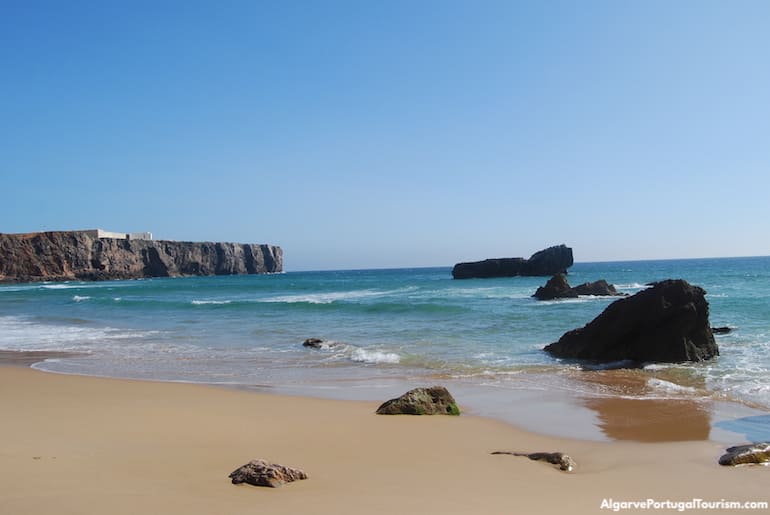 Despite its location next to the Sagres fortress, this is a little-visited and very quiet beach. It’s essentially a beach for surfers, with good waves throughout much of the year. Beginners come with surf schools in the summer, while the more experienced come for the more powerful waves of autumn and winter. Although it can be windy, it’s somewhat sheltered by the surrounding cliffs, from where you have a magnificent view, especially at sunset. There are rocks along the shore and the currents can be strong, so it’s not recommended for children.

See the Praia do Tonel Guide. 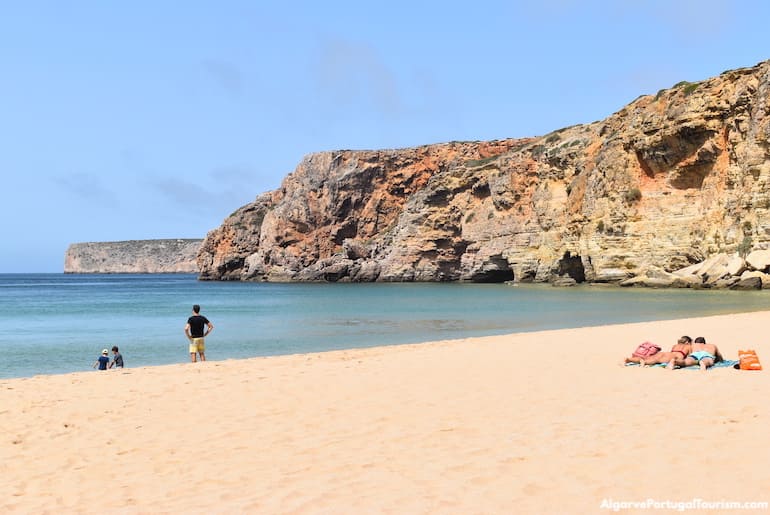 The beach at the “end of the world” (it’s between Cape St. Vincent and the Sagres Promontory) is surprisingly overlooked by tourists. Those who decide to go down the steep staircase to the sand find surfers on one side and naturists on the other. The 40m(130ft)-tall cliffs protect it from the winds and create a magnificent scenery. There are caves to explore and, depending on the waves, bodyboarding and kayaking are also popular activities. If you stay until the end of the day, you’ll witness a magical sunset.

See the Praia do Beliche Guide. 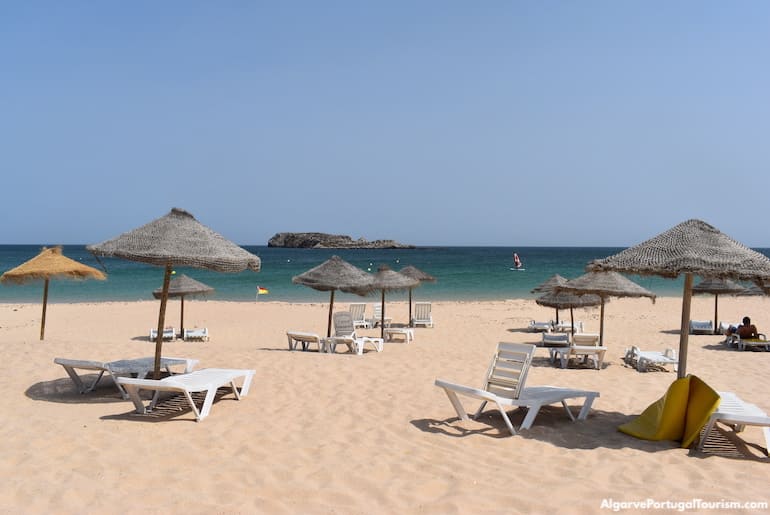 Here the top sport is windsurfing. Although it’s in a bay that’s relatively sheltered, it can still be a little windy. It’s also the most family-friendly beach in Sagres and one of the best in Algarve to take the kids. The water is shallow and most often calm, so generally safe. That surely must have been the reason why a major family resort was built behind it. A big islet in front has a number of underwater caves, which divers love to explore.

See the Praia do Martinhal Guide. 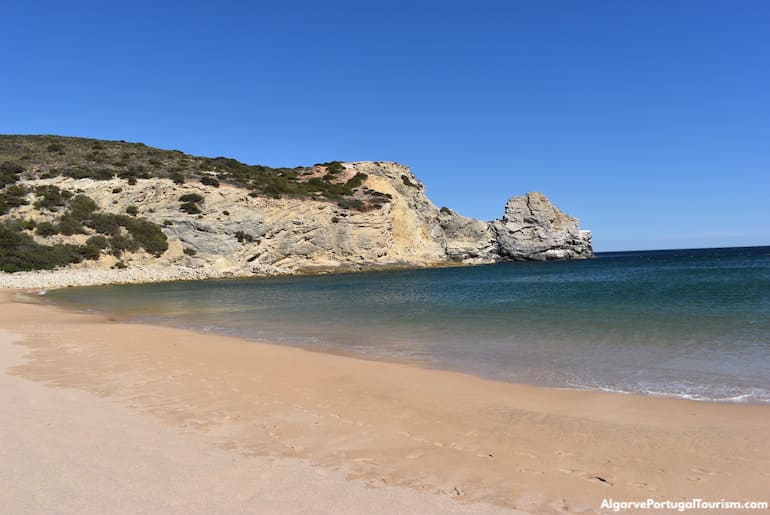 It remains an undiscovered paradise for everyone except campers and naturists who’ve been coming here for years. It’s a remote beach, reached via an unpaved road, so it’s never crowded. It lacks the typical big waves of this coast, so there are no surfers either. The water is usually calm, and there is no lifeguard supervision or facilities of any kind. Most people come here for the wild, laid-back atmosphere and to sunbathe nude surrounded by an unspoiled landscape of green valleys, hills, cliffs and dunes.

See the Praia do Barranco Guide. 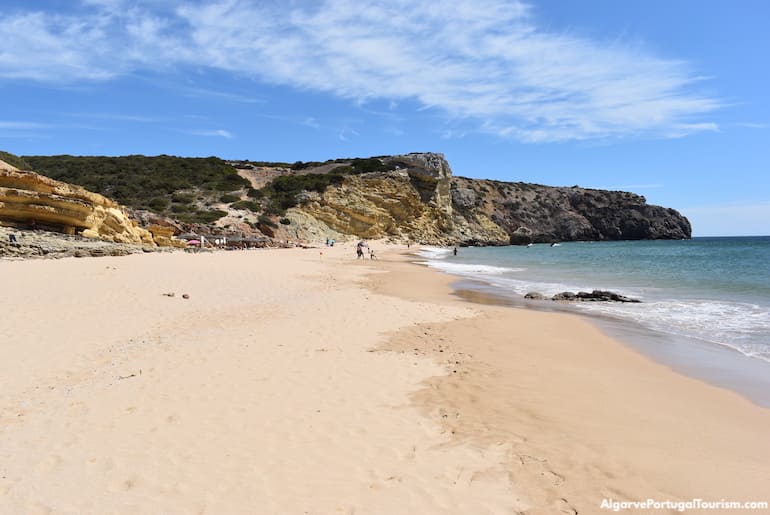 Known as a beach for surfers and naturists, it’s quiet and surrounded by a green landscape. The naturists tend to head to the left side (when facing the sea), which becomes narrow when the tide rises. It’s 400 meters (over 1300 feet) long, so offers plenty of space for the relatively few people who come here. The water might be cold, but it’s clean, and when the waves aren’t too big, good for swimming -- just watch out for the rocks on the right side.

See the Praia do Zavial Guide. 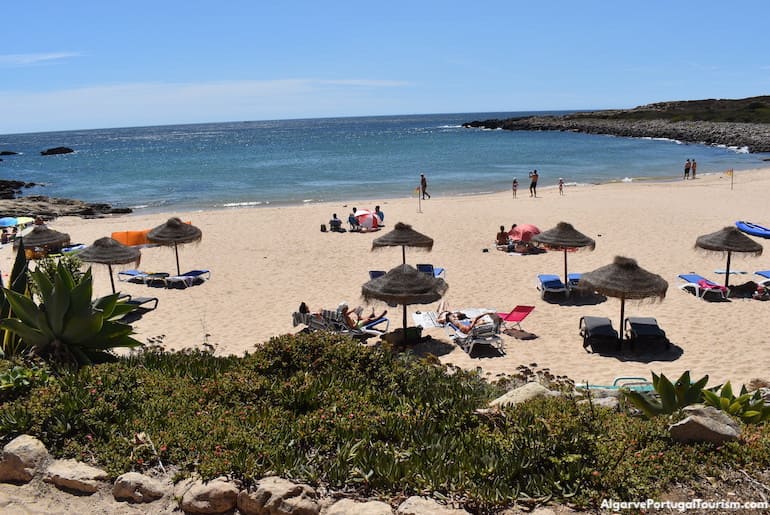 For centuries, this was where fishermen went into the Atlantic looking for tuna. Today, it’s mostly visited for its restaurant facing the sea. It’s a small beach, surrounded by nature. Its waters are calmer than at other beaches in the Sagres region and therefore good for swimming, snorkeling and diving. Unlike the neighboring Praia do Zavial, it’s not a beach for surfing. 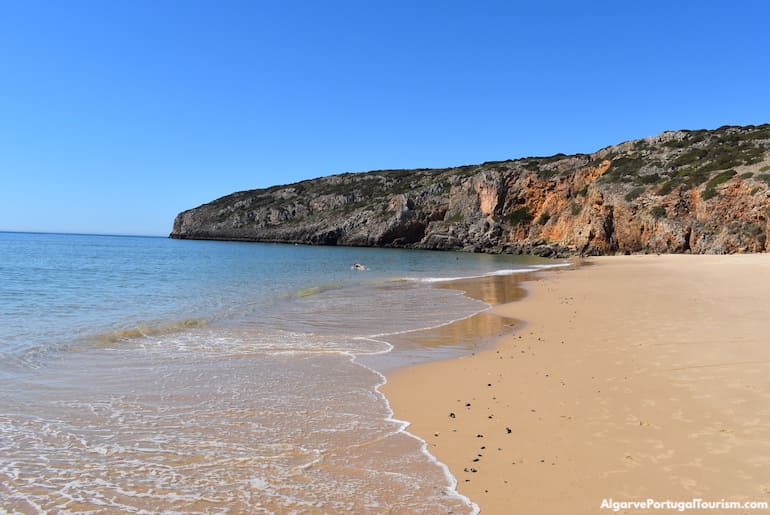 Named after a series of caves on its eastern side, this is one of Algarve’s biggest surprises. It’s quite beautiful, but its remote location, reached via an unpaved road, keeps the crowds away. It’s almost exclusively frequented by naturists and campers, who love to stay inside the caves. Although it’s relatively small, and becomes even more so at high tide, there’s always space for sunbathing on the sand. When the water is especially calm and clear, it’s great for swimming. 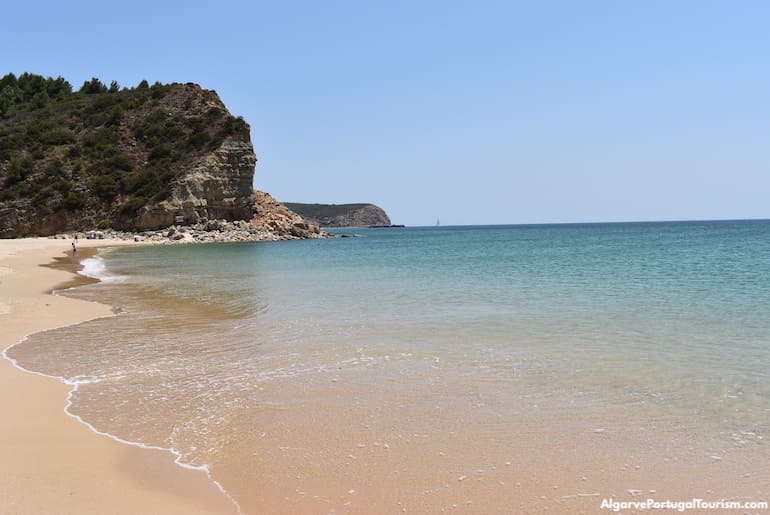 Except for an abandoned warehouse of a 19th-century fish canning factory, there’s just pristine nature around this beach. Despite the seclusion, it can easily be reached through paved roads. There’s a good view from the top of the cliff on the western side, where you can also find traces of a Roman villa. The water is usually calm and good for swimming in the summer. 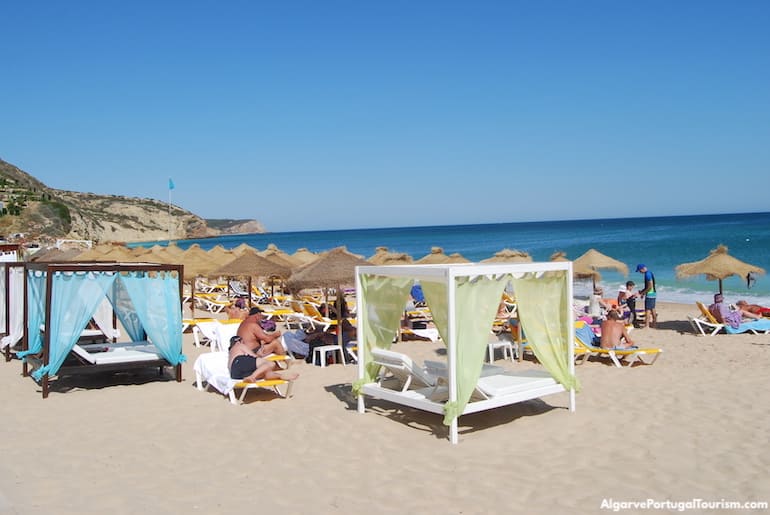 Salema is a small fishing village located about 15 minutes to the east of Sagres. American travel writer Rick Steves says its beach might be Europe’s most enjoyable, The Guardian placed it on its list of the world’s top 50 beaches, and Travel & Leisure magazine considers it one of the best secret beaches on Earth. The very relaxed, rather bohemian atmosphere may be the reason why many find it so enchanting, and it attracts all kinds of people. Its usually-calm waters are safe for children and good for standup paddleboarding, swimming, kayaking, and windsurfing. It’s also a popular site for divers, who explore a shipwreck from 1759. Fishing boats and wicker parasols compete for space on the beach, but it’s never crowded. The eastern end is quieter, while the western end preserves dinosaur footprints from 150 million years ago. 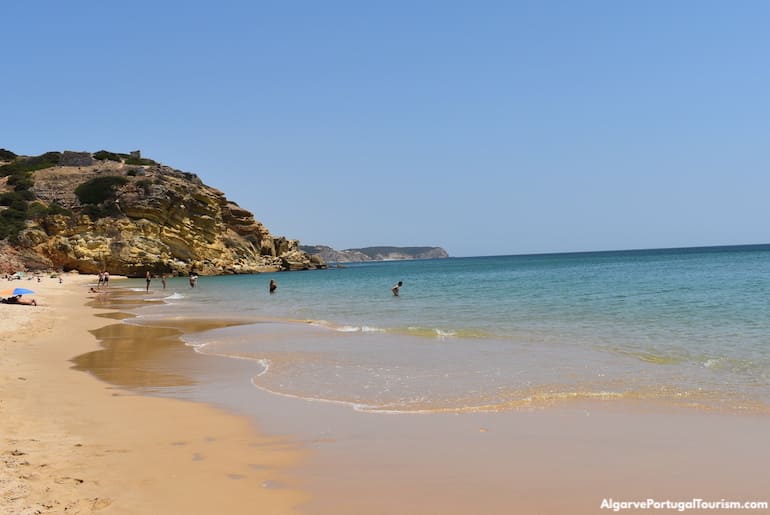 It’s quite a secluded beach, but found right to the west of Salema and not difficult to reach. Surrounded by cliffs with Mediterranean vegetation, it hasn’t yet been discovered by tourists, but attracts its number of naturists, young couples, and families. The atmosphere is always peaceful and the water is most often calm in the summer. 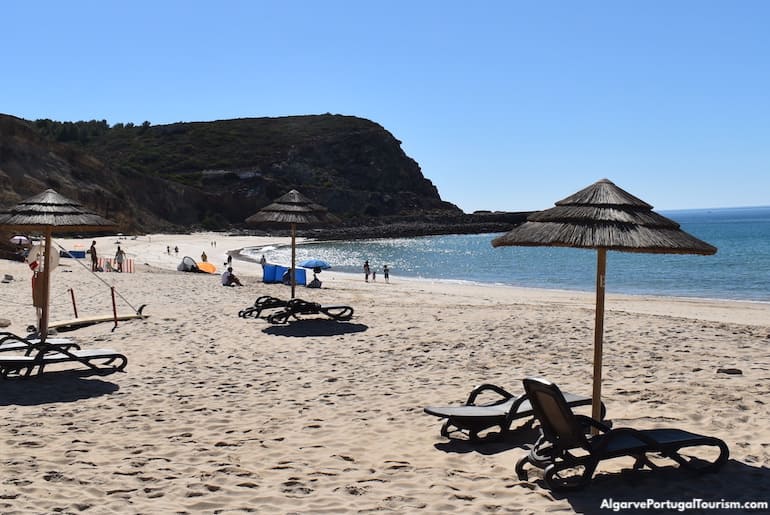 Christopher Columbus almost died at this beach sixteen years before his voyage to the “New World.” French pirates attacked and burned down his ship, and he had to swim to shore. For centuries, it was the beach of fishermen, and their old huts gave it its name. More recently it became a favorite of naturists, but nowadays it’s more frequented by local families. It can be windy, but cliffs offer some shelter on the eastern side. It’s not the best for swimming, due to underwater rocks and sometimes-rough seas, but it’s clean and very relaxing. 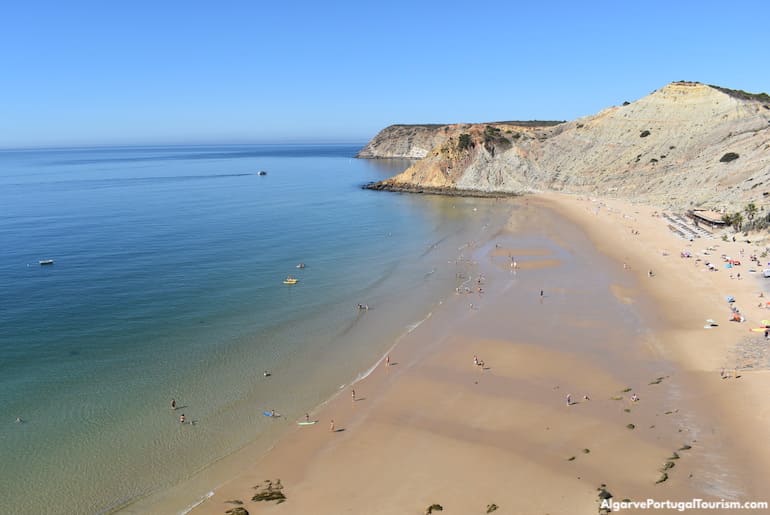 Burgau is a small village about 20 minutes east of Sagres and its beach a favorite of families. It’s a picturesque place of white houses and small fishing boats, and remains very much a traditional Algarve village, despite the growth of tourism. The beach is narrow and often crowded in the summer, but the often calm and clear waters are good for swimming and generally safe for children.

See the Praia do Burgau Guide.