The Most Beautiful Caves and Rock Formations in Algarve

The must-see natural wonders in Algarve 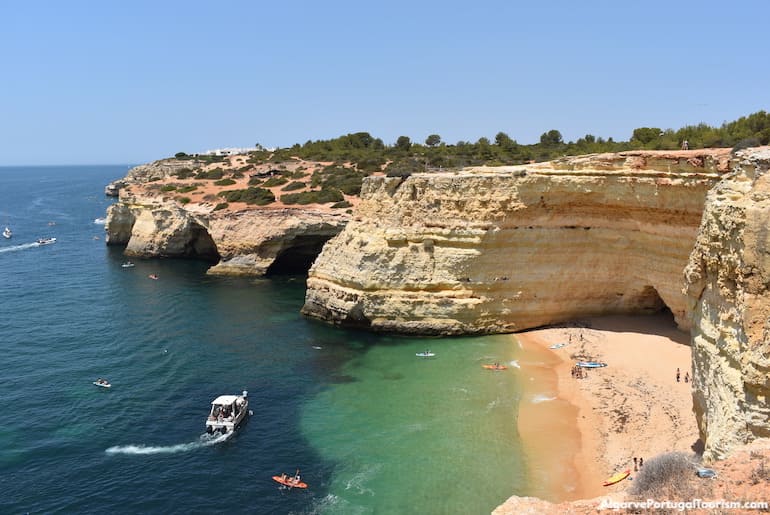 Mother nature outdid itself when it shaped the Algarve over the millennia. It created a breathtaking coastline with a diverse landscape of tall cliffs, idyllic bays, sandbar islands, hidden caves and grottoes, and oddly-shaped rock formations. It’s this natural beauty that mostly captivates visitors, who become spellbound and end up exploring much more of the region than they anticipated. Many of the famous caves are only accessible by sea and the best close-up views of the more spectacular rocks are from the water, so a boat trip or kayak tour is mandatory.

These caves and rock formations are concentrated on the coast between Lagos and Albufeira, which is sometimes referred to as Costa de Ouro (“Golden Coast”). The name describes the color of the cliffs and rocks. Between Lagos and Albufeira are Alvor, Portimão, Carvoeiro, Lagoa, and Armação de Pêra. You can join a tour or rent equipment at any of these towns and explore the entire coast. During your journey, you’ll discover dozens of wonderful beaches. Beach-hopping is another must. You’ll find one more beautiful than the next, each with its unique scenery and atmosphere. On your way, you might even spot a few dolphins.

You could spend weeks exploring the entire coastline of Algarve and always find something new and interesting. The variety of landscapes and beaches is unmatched by any other European coastline. West of Costa de Ouro is the pristine and protected Costa Vicentina, with breathtakingly wild beaches that attract naturists and surfers. The east is all about dunes, marshes, lagoons and sandy islands. If it’s the famous Algarvian caves and rock formations you’re looking for, Costa de Ouro is where you should stay. Below are the natural wonders that you should explore. 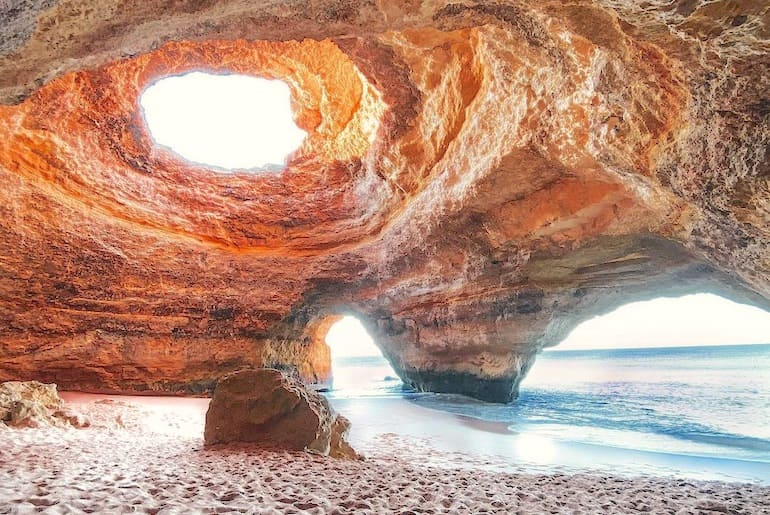 Of the many caves carved out by the sea and winds in Algarve, this one is the most spectacular. It doesn’t matter how many times you see it in photos, you’ll be wowed when you arrive. It’s accessed by boat from several beaches in the area, although Praia de Benagil is the closest. It encloses a small beach and has become the most famous sight in Algarve. Considered one of the world’s most extraordinary sea caves, it resembles a big domed temple with an open skylight. Go early in the day to avoid the crowds. 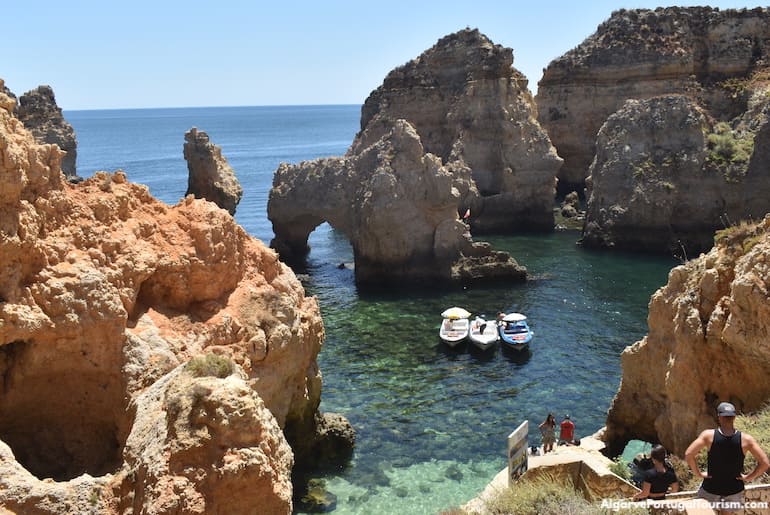 Ponta da Piedade is a headland in the city of Lagos and one of Portugal’s most beautiful sites. Its series of caves and tall rock formations (some rising up to 20 meters or 65 feet) can be admired from the top of the cliffs, from a terrace at the bottom of a long staircase, or on a boat tour. Some of the rocks have been named by locals according to their resemblance -- one is “the elephant,” another is “the cathedral,” another “the sphinx”... You can also use your imagination as you get close to them on a boat. Walking north over the cliffs takes you past a number of stunning beaches. The first one is hidden at the bottom of the cliff and is a nude beach (Praia dos Pinheiros), and the next one is one of Algarve’s most scenic (Praia do Camilo). A short walk from there is Praia da Dona Ana, another famous beach characterized by ochre cliffs and rocks. The best time to visit Ponta da Piedade is the early afternoon, when the sun shines just right for the perfect photos. However, many people prefer the peacefulness of the sunrise or stay for the magical sunset. 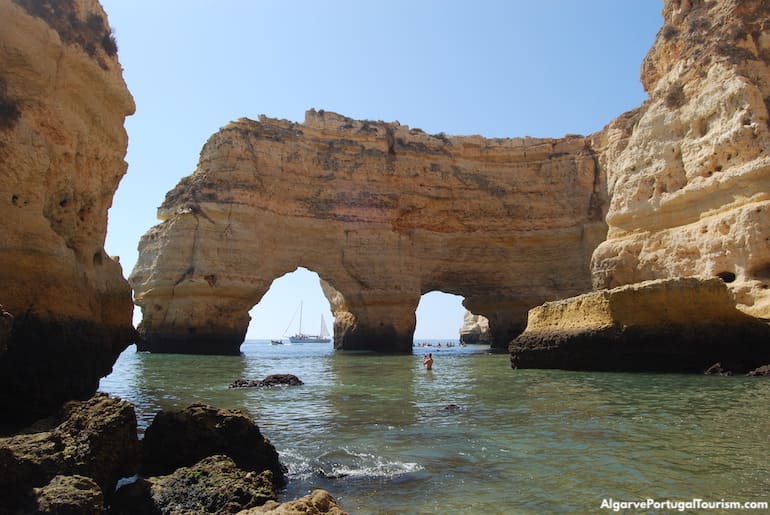 Several international publications have considered Praia da Marinha one of the most beautiful beaches in the world. As a result, it’s now the beach everyone wants to go to in Algarve. It doesn’t offer much sand for everyone to spread their towel and sunbathe in peace, but the real attraction is the series of rock formations and the views from the clifftop. Instagrammers flock here and look for the perfect angle to take a photo of a shape of a heart formed by a double-arched rock. The striking beach has countless other picture-perfect spots, but you’ll want to continue up a trail called Sete Vales Suspensos (“Seven Hanging Valleys”) for more intriguing rock formations and breathtaking views of golden cliffs and turquoise waters -- make sure your camera or phone are fully charged! 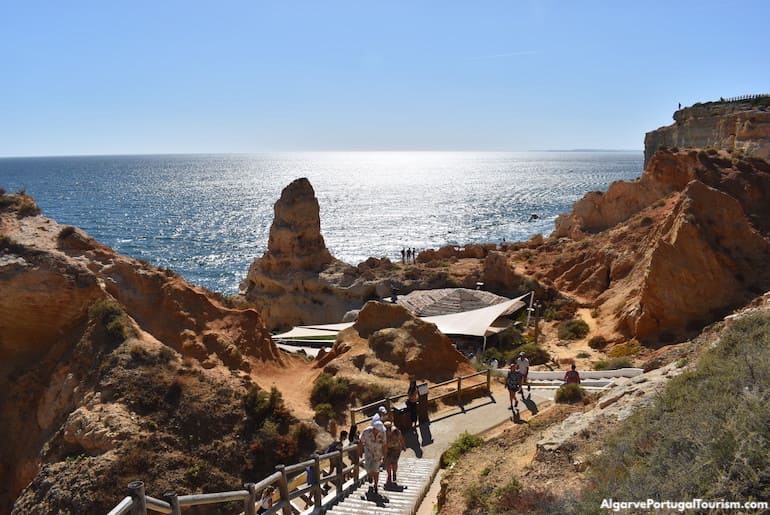 Erosion has created a fascinating site that looks like a lunar landscape in the town of Carvoeiro. The wind and the sea carved rock pools, caves and “balconies” over the sea, and there are fossils of marine life from two dozen million years ago. It’s one of Algarve’s main natural monuments, with sweeping views from all angles. Paths are hewn into the limestone cliffs and rocks, and the rock pools are formed at high tide. Daredevils jump into the ocean from the clifftops while others swim in the pools. The scenery is even more beautiful at sunset. It’s recommended that you continue down the boardwalk that goes to the center of Carvoeiro, which has displays explaining the vegetation and wildlife of the place. Nearby (less than a 15-minute walk away) is Vale Covo, a “secret” beach that’s only accessible at low tide from the Tivoli Carvoeiro Hotel. You don’t have to stay at the hotel to access the beach or even the very recommended rooftop bar, which offers a stunning view of the coast. If you can make it down to the beach and the tide allows it, swim to the cave on the eastern side. 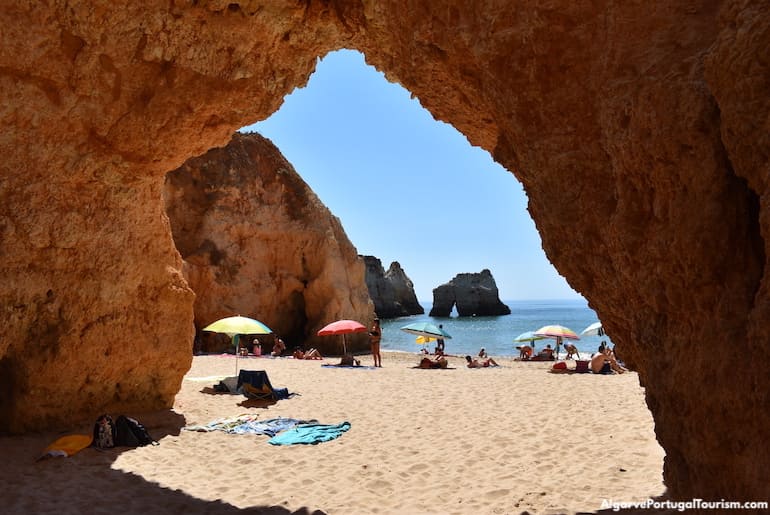 One of the most beautiful beaches in Algarve has three access points, but they’re all not so easy to find. There’s an elevator and a staircase hidden at the top of the cliff, or you can go over rocks from the neighboring beach of Três Irmãos. Even if you get there from Três Irmãos, make sure you still go to the clifftop at the end of Rua Praia da Prainha, for the stunning view. The beach is a series of coves and caves, and usually has calm waters in the summer. The romantic scenery inspires couples to inscribe love messages in the caves and the arches and other formations are perfect backdrops for selfies. 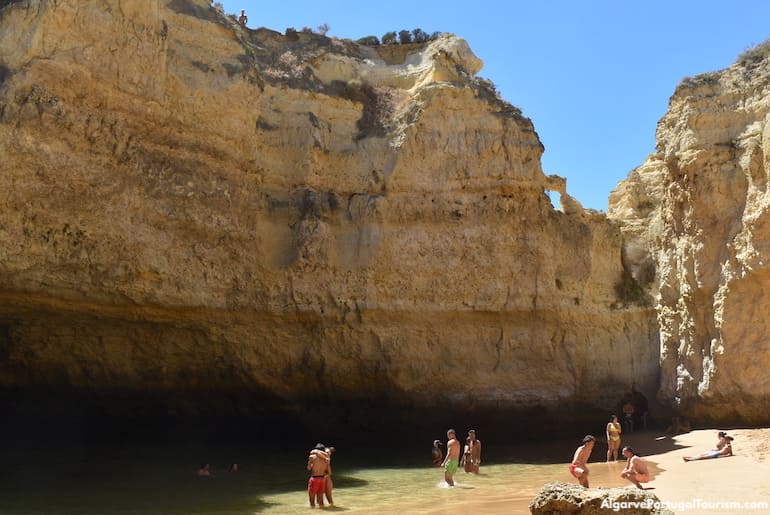 Due to Google Maps, this beach is no longer secret. However, until recently, it was a little piece of paradise that only a few knew about. It’s a sheltered cove, reached from the sea (many discover it on a kayak tour) or from a trail and steps leading down from the top of the cliff. It’s small, and most of it is shaded by the surrounding cliffs, so you shouldn’t visit with sunbathing in mind. Instead, you’ll be enjoying the romantic atmosphere in the crystal-clear water or taking photos. Before you leave, walk over the cliffs and you’ll see other magnificent beaches backed by ocher cliffs. These, however, can only be reached by boat. 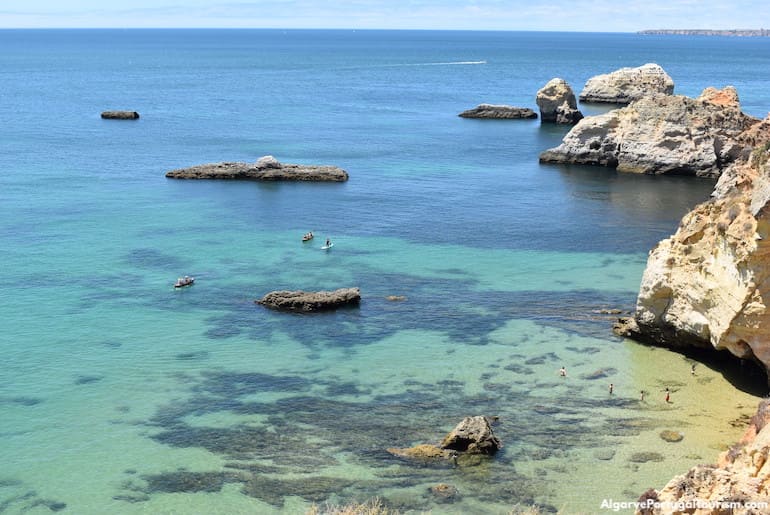 For this beach, you have to be lucky to be there at low tide, as it’s inaccessible when the tide rises. It remains a well-kept secret and is frequented by naturists who’ve discovered it at the bottom of a promontory between Portimão and Alvor. It’s named after a submarine-shaped rock emerging from the water, and to reach the sand you must go through an arched opening on a cliff. Other openings lead to a spectacular scenery of rocks and caves (only possible at low tide). Make sure you don’t tell anyone. 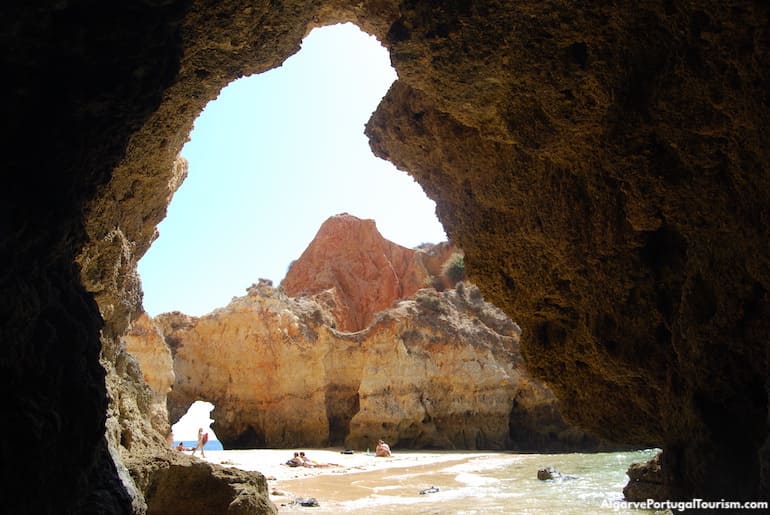 A short walk from Praia do Submarino is another clothing-optional beach. It’s also found at the bottom of the promontory, but is much more popular, mostly with young couples. Before you follow the trail down, walk over the cliffs for the postcard panorama. The beach is split in two by a cliff, and the two sides are connected by a tunnel on the cliff. Visit both, as you get to explore the rocks and small caves, and admire a view of the Portimão coast.

From the promontory of João de Arens, you can see a series of rocks that almost look like they’re floating in the water, carefully placed there by someone. In reality, it’s the result of millions of years of erosion (the limestone rocks are believed to have been formed about 25 million years ago). Follow the trail over the cliffs for some impressive views, and then head down to the sand. Unfortunately, most of the beach is only accessible at low tide. That is, the most interesting part of it -- the rocks in the water, coves and caves. If the tide is high, you can only get there by boat. 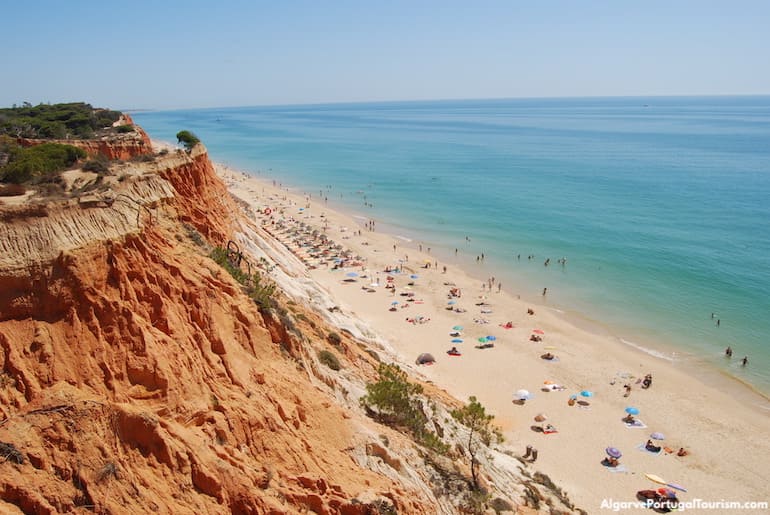 The cliff behind this beach is so extraordinary, it could only have named the beach (Praia da Falésia means “Cliff Beach”). It looks like the Grand Canyon by the sea, stretching for six kilometers (about four miles) from the eastern end of Albufeira to Vilamoura. The red and ocher cliffs rise up to as much as 40 meters (130ft), and the impressive sight has led several publications to rank the beach among Portugal’s and even the world’s most stunning. For the best view, head to the top of the pine-covered cliff. It’s especially spectacular at the end of Rua da Falésia and at sunrise or sunset.

It’s another relatively secret beach, mostly frequented by the guests of the only hotel nearby, but social media and travel publications have also drawn attention to it (Condé Nast Traveler magazine once ranked it among the best beaches in Europe). It’s quite small and divided into two sections by a rocky outcrop. On the smaller right side is a narrow tunnel leading to an arched cliff known as Arco de Albandeira (“Albandeira Arch”). When the sea is calm, you can swim under and around the arch, and it’s also possible to walk on top of it for beautiful views. 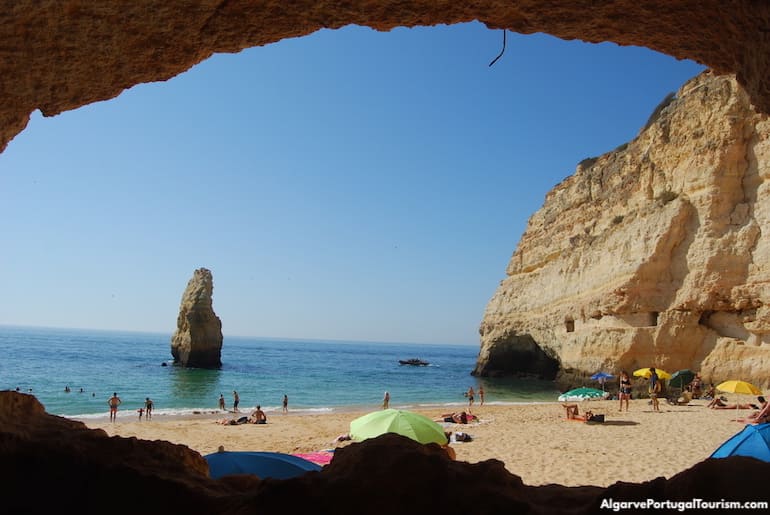 In order to reach this beach, you need to find a tunnel hidden on the ground. At the bottom of the steps in the fossil-covered tunnel you’ll see an opening with a “window” carved on the cliff, framing a picture-perfect view of the beach. In the water is a perfectly-centered rock, while to the right are steps hewn on the cliff, used for cliff jumping. The magical scenery makes this one of the most beautiful beaches in Europe​​, according to Condé Nast Traveller magazine.