How to take public transportation (buses and trains), taxis and Uber in Algarve, and how to rent a car

While most Portuguese tourists in Algarve use their car to get around, foreign visitors rely mostly on public transportation. Renting a car is the better option, as it allows you to reach many of the beautiful beaches with no public transportation access. Deciding whether to drive or take buses or trains depends on your budget and where you want to go. The guide below will help you make the decision.

Getting Around Algarve by Car

The fastest and most convenient way to get around Algarve is by car. There are two major roads connecting the main cities and the smaller towns -- the N125 and the A22. The N125 is free but the trips take longer, as it goes through the center of many towns, often with heavy traffic and many traffic lights. It does offer better scenery and allows you to stop at supermarkets, restaurants and tourist attractions along the way. The A22 is a toll highway but is the fastest way to reach most destinations. Most rental cars have a device on the windshield for the electronic toll system called Via Verde. With it, you can just go on the Via Verde lane on all Portuguese highways and not have to stop and pay the toll. As you go through the Via Verde, a display shows the amount being automatically charged to the rental company. On the A22, all tolls are paid electronically. You’ll hear a beep as you pass through the toll gate and will pay that amount when you return the car.

Renting a Car in Algarve 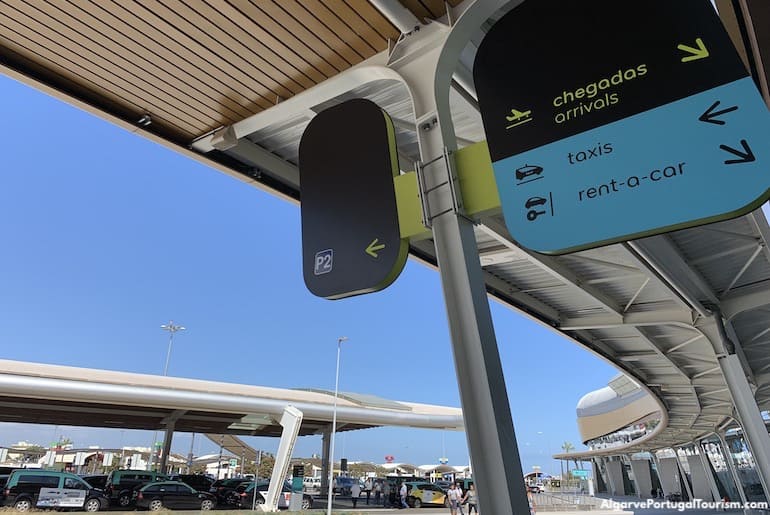 Renting a car is more expensive than using public transportation, but it’s worth it when you consider the freedom it offers and the time it saves. It’s recommended that you rent it online and pick it up at Faro Airport. This way you can be sure that you have a car ready when you arrive and know how much you’ll pay. More importantly, booking online gives you better deals. At the airport’s arrivals hall, follow the signs to the car rental companies, which are found outside the terminal. The companies at Faro Airport are Alamo, Avis, Enterprise, Europcar, Guerin, Hertz, Sixt, and other small, low-cost companies (these do offer lower prices but usually have a maximum of 60 kilometers per rental and then charge per extra kilometer). It’s recommended that you get insurance which will cover any damages, including small scratches, which can occur easily, especially as you drive through dirt roads to the more remote beaches. Car rental companies will also ask you for a security deposit on your credit card. That charge is cancelled when you return the car. There are gas stations by the airport (the closest is about one minute away), so you don’t have to worry about where to refuel when you return the car. 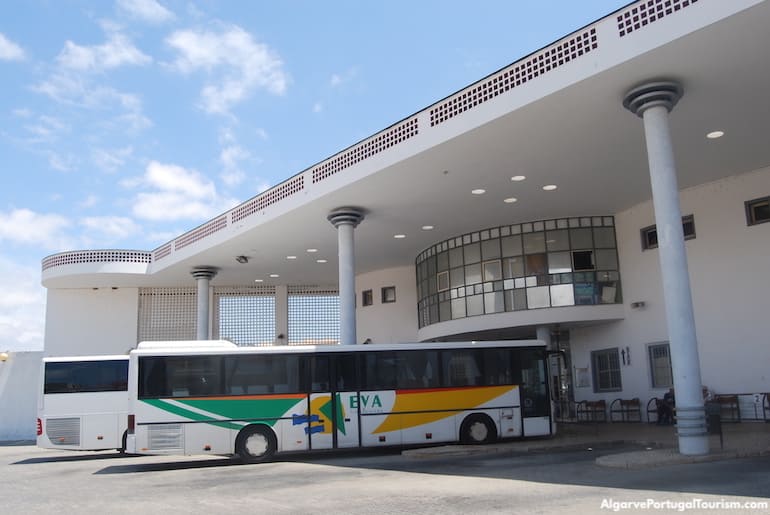 Traveling by bus in Algarve can be complicated because most routes have only a few departures per day and the frequency is further reduced on weekends, even in the summer. However, it is the only or best choice to reach some popular destinations, such as Sagres and Silves. There’s a bus company that covers the entire region of Algarve, the “Vamus,” plus urban services in Faro (the “Próximo”), Portimão (the “Vai e Vem”), and Albufeira (the “Giro”). In most cases, tickets are bought at the stations. When you board at the stops on the roads, you buy them from the driver. Bus stops are usually marked “Paragem” (sometimes “Paragem/Bus Stop” in the bigger towns) and display the numbers of the buses that stop there, plus the times and the route covered. When you buy tickets from the driver, only cash is accepted, and it’s recommended that you pay with coins, as the driver may not have enough change for large bills.

Vamus bus number 56, the "Aerobus," connects Faro Airport to Albufeira, Lagoa, Portimão, and Lagos. There are just seven departures per day, at irregular intervals, between 9:45am and 6:45pm. For other destinations in Algarve, you need to connect in the center of Faro. Buses running about twice per hour, operated by the Próximo company, stop at the airport and terminate at the bus station in the city center in about 20 minutes. From there you can take a Vamus bus to major towns. The final destination is displayed on the front of the bus (sometimes on a piece of paper glued to the windshield). To check schedules and stops, see the Vamus website.

Single fares can range between 3 and 7 euros, depending on the distance covered. You can also acquire a Tourist Pass, which gives you unlimited rides on the Vamus buses within Algarve over a period of 3 or 7 days (it's €35 for three days and €45 for seven days). Most buses run from 7am to 8:30pm in the major towns. Note that many of the smaller villages away from the coast do not have bus services or have them on weekdays only. You should also keep in mind that the times displayed at bus stops can’t always be relied on -- traffic congestion means that buses between Lagos and Albufeira, for example, are often as much as 10 minutes late, especially in the summer. At some stops, however, you’ll find a QR code that you can use to know how far the next bus is from that location. 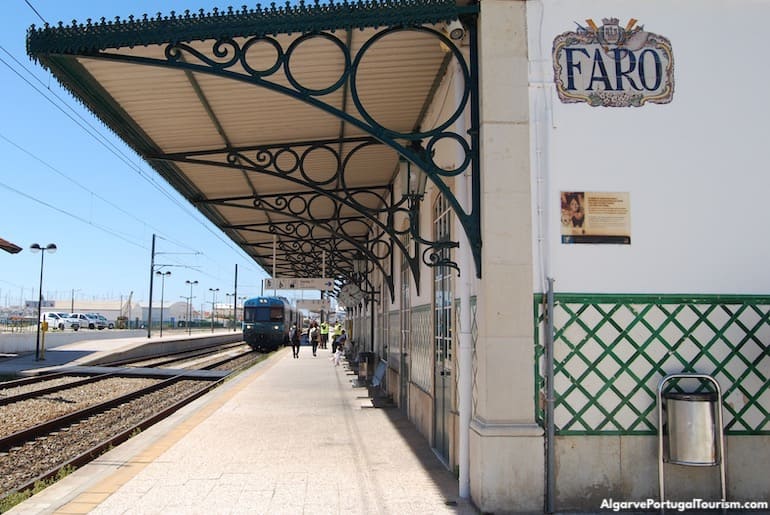 Algarve’s train line runs between Lagos in the west and Vila Real de Santo António by the border with Spain in the east (it does not cross the border into Spain). Trains stop in the main towns in between, such as Silves, Portimão, Albufeira, Loulé, Faro, Olhão and Tavira. The stations in Lagos, Faro, Olhão, Tavira and Vila Real de Santo António are central, but, surprisingly and inconveniently, the stations in Silves, Portimão, Albufeira and Loulé are actually away from the center, so the bus to those destinations is the recommended public transportation option. All trains are operated by the national CP (“Comboios de Portugal”) company, which allows you to buy tickets online in advance, sometimes with discounts -- cp.pt. The trains from Lisbon terminate in Faro, and you need to connect there or at Tunes before it to continue to other destinations in Algarve. Unlike the long-distance trains from Lisbon, which have first and second class services, these regional trains do not have different services and do not assign seats.

If you plan to do a lot of train travel in Algarve, you can get the “Bilhete Turístico,” or “Tourist Ticket,” which offers unlimited rides over a period or two or three consecutive days. This ticket is available at the stations’ ticket offices and can be used on the Algarve line only -- it does not include long-distance Intercidades or Alfa Pendular trains to Lisbon, for example. Most stations are very small, with no screens indicating the next trains and with no announcements.

Taxis or Uber in Algarve 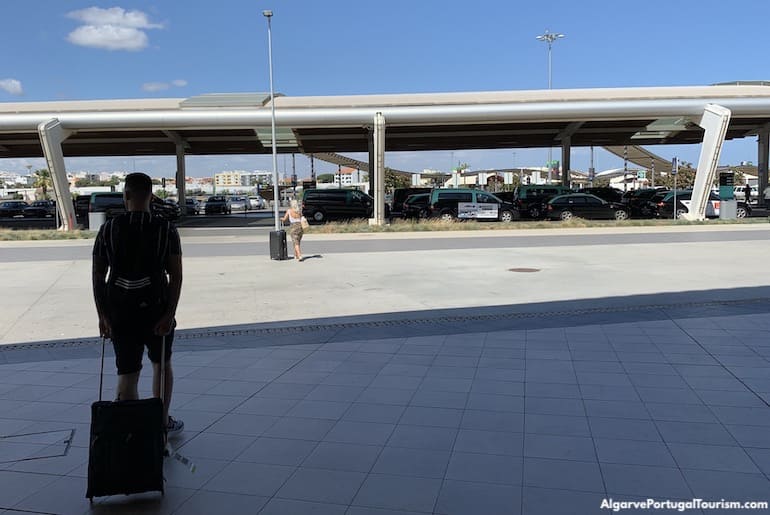 While traveling by taxi is more convenient and comfortable than by bus or train, it’s much more expensive. It’s only recommended for short distances, such as if you’re staying in a resort by the beach and want to go dine in the center of town. They’re also often used to go from the airport to the center of Faro. To go from the airport to other destinations in Algarve, a pre-booked transfer is the better (less expensive) option. Taxis take up to four passengers and all have meters.

Uber operates in Algarve and is usually cheaper than taxis. It’s very convenient and reliable around the major cities such as Faro, Albufeira, and Lagos, but you won’t find many cars available in the eastern region, such as Tavira. If you’ve used Uber or other ridesharing apps, you know that the main benefit is that you don’t need to have cash at hand and know exactly how much you’ll pay before you enter the car.