Choosing the Perfect Beach for You in Algarve 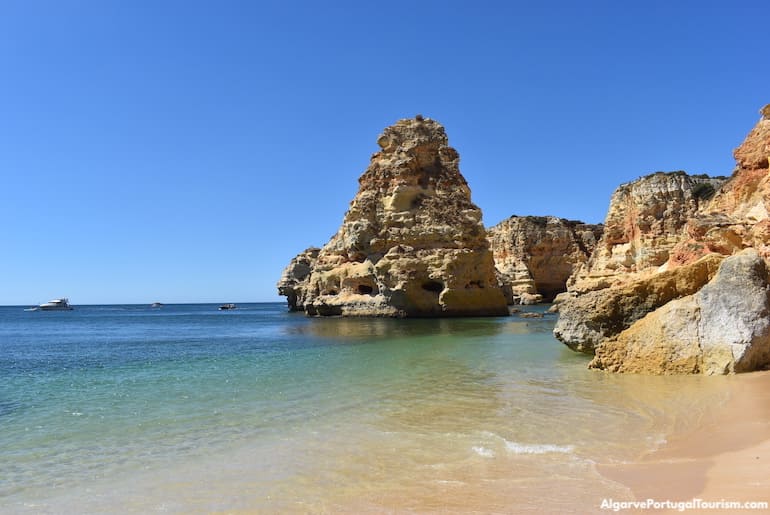 Algarve was named the world’s leading beach destination at the World Travel Awards and it’s easy to see why -- it’s not in a remote part of the globe, it’s for all budgets and all tastes, and has some of Europe’s finest beaches, most of them flying the Blue Flag, signifying quality and safety. Its coast is an almost unbroken stretch of sand and cliffs, starting at the southwestern tip of Europe and ending at the border with Spain, about 200 kilometers (125 miles) away. To the west, the coastline is characterized by spectacular cliffs, caves and golden rock formations sculpted by the sea, while to the east it has a flat landscape of dunes, lagoons and sandy islands. These islands are part of the Ria Formosa Natural Park, a nature reserve which protects wildlife and the coast from overdevelopment.

The climate is Mediterranean, and the region has the most sunshine hours in Europe. You can expect blue skies and warm temperatures (averaging 27C or 81F) throughout the summer. The water naturally depends on the currents and the tides, but the temperature is always more Californian than Mediterranean, averaging 21C (70F) in July and August.

The beaches to the east tend to have calmer waters, while the west coast offers waves for surfing and other water sports. A small cove with crystal-clear water is never too far away, and discovering a “secret” beach should be part of any Algarve experience. These are best found on boat tours along the coast, as many wonderful coves and caves are only accessible from the sea.

There truly are beaches for everyone -- family-friendly, clothing-optional, romantic, gay-friendly, for surfing... The main beach towns are Albufeira, Lagos, Portimão, Sagres, and Tavira. These have beaches within walking distance or regular ferries to islands. 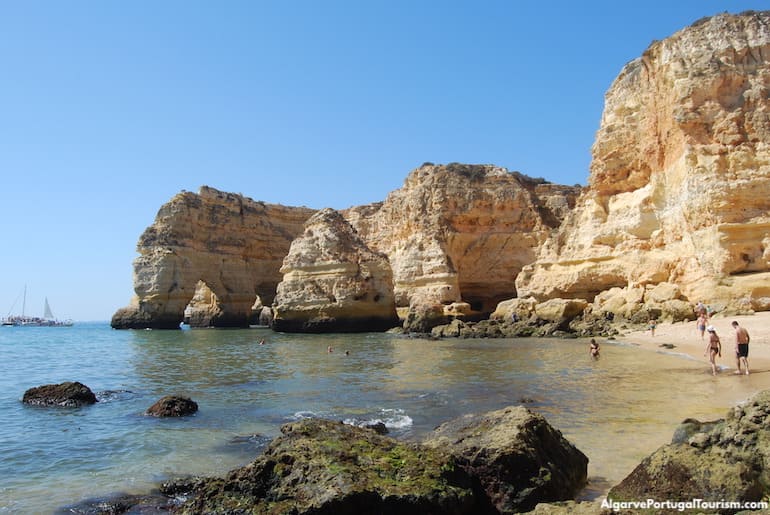 Choosing the Perfect Beach in Algarve

There are over 150 beaches to choose from in Algarve. Where you end up depends on whether you’re looking to simply enjoy a day by the sea, want to surf, or like to sunbathe in your birthday suit, and whether you’re renting a car or relying on public transportation. Most people stay by the more developed towns of Albufeira, Portimão and Carvoeiro in the center of the region, where there are family-friendly resorts, water parks and a vibrant nightlife. If you’re just looking to relax in the sun for a few days and to be within walking distance of several beaches, this is where you should stay too.

As an alternative to Albufeira, many young people and couples choose Lagos, to the west. It’s a relatively small city and doesn’t have big resorts, but its beaches are some of the most beautiful and romantic in Portugal. Further west is Costa Vicentina, a refreshingly undeveloped coastline. The wild beaches here are a paradise for surfers, naturists, campers and hippies, but there are very few hotels.

Eastern Algarve has charming towns and fishing villages, and the main beaches are on the islands of the Ria Formosa Natural Park. This is for those looking for peace and quiet, and who prefer unspoiled natural scenery.

To make sure you don’t miss the best beaches, see the top 50 beaches in Algarve.

How to Get to the Beaches in Algarve

If you stay in the main cities, you can walk to a number of excellent beaches. However, many of the best ones (including those with the most emblematic caves close to Carvoeiro and especially the ones on Costa Vicentina) require a car. Public transportation doesn’t reach the beaches in the more remote areas, away from the major towns. It’s recommended that you rent a car if you want to explore the coast. If you’re staying in the eastern part of the region (between Faro and Tavira), you can use the regular ferries to reach the beaches. In fact, a car here is useless, as the islands have no road access.

The Bathing Season in Algarve

The bathing season is from June to September, but many people find the weather to be pleasant enough for a day at the beach as early as April and as late as October. However, outside the official bathing season, there is no lifeguard supervision. The busiest months are July and August, when the Portuguese join the tourists on vacation. If you want to avoid the crowds but still enjoy sunny skies, visit in late June or early September.

The tides and currents are always changing, so one day you might be swimming in calm waters and on the next the sea is too rough to set foot in. This means that you should always pay attention to the warning flags -- a green flag means conditions are favorable for swimming, yellow means you should be cautious and remain at the water’s edge, red means you should stay out of the water. Flags are posted on all supervised beaches. You shouldn’t swim at beaches without lifeguards. Conditions are monitored throughout the day, and you should always follow the advice of the lifeguards. Don’t assume that a gorgeous sunny day means it’s safe to swim. Rip currents can also form on calm days. Also watch out for rocks hidden below the surface. The strongest currents are on the west coast (Costa Vicentina), where it’s often not suitable for inexperienced or young swimmers. 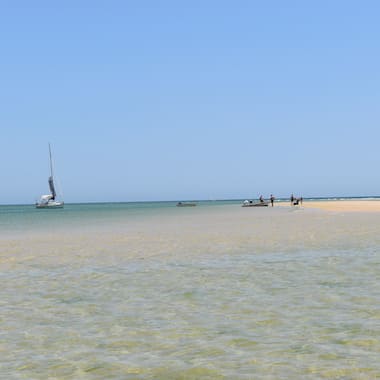 Top 50 Beaches
The Best and Most Beautiful 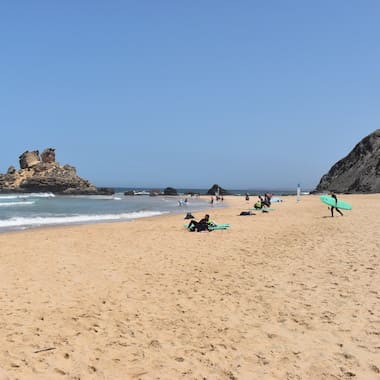