The Most Romantic Places in Algarve

The best destinations for couples or a honeymoon in Algarve 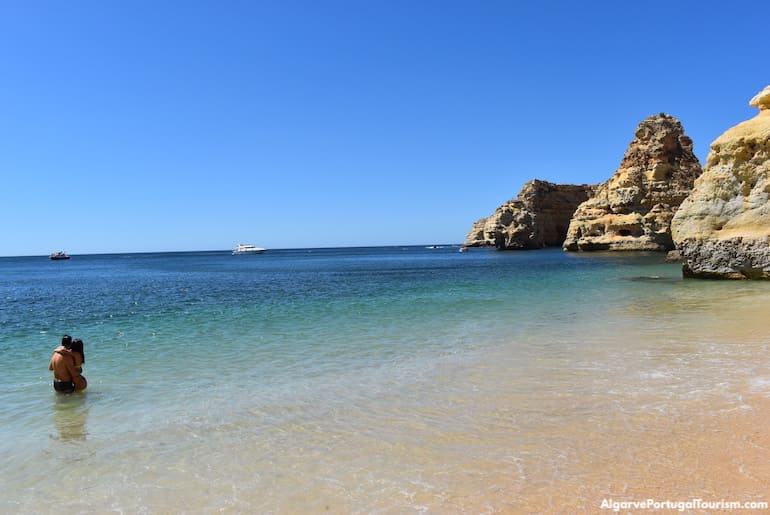 For a romantic weekend getaway, a special day with someone special, or a honeymoon, Algarve will be the right choice. There are some wonderful hotels and resorts in gorgeous settings for memorable moments, charming towns to explore, splendid sandy beaches for walks by the sea, caves and rock formations to discover on boat tours, and natural beauty to gaze at from sunrise to sunset. Below are the most romantic places and experiences in the region: 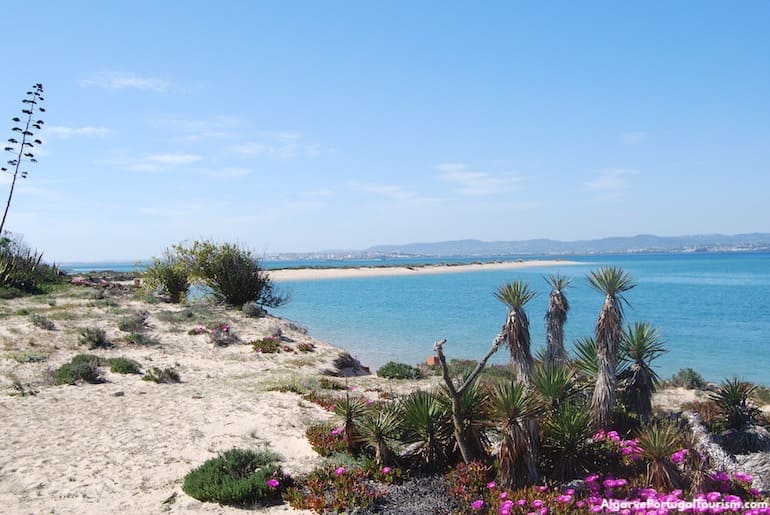 You don’t have to fly across the globe to a remote corner of the planet to escape to a deserted island. There’s one easily reached from Algarve’s capital city, by ferry, in just a few minutes. This island is part of a protected natural park and is literally called Ilha Deserta (Deserted Island). It’s not inhabited, and there’s just a wooden restaurant, a small lighthouse, and a few sheds by the pier. This unspoiled natural paradise has a 7km(4 miles)-long stretch of sand, and the western end is an official nude beach. It’s very clean, as certified by the Blue Flag, and in the summer there are wicker parasols and loungers for rent. A 2km-long boardwalk takes visitors around the island over the dunes, and even in the high season you’ll find yourself completely alone in places. There are ferries throughout the year, allowing you to go on a refreshing walk by the sea even outside the bathing season. 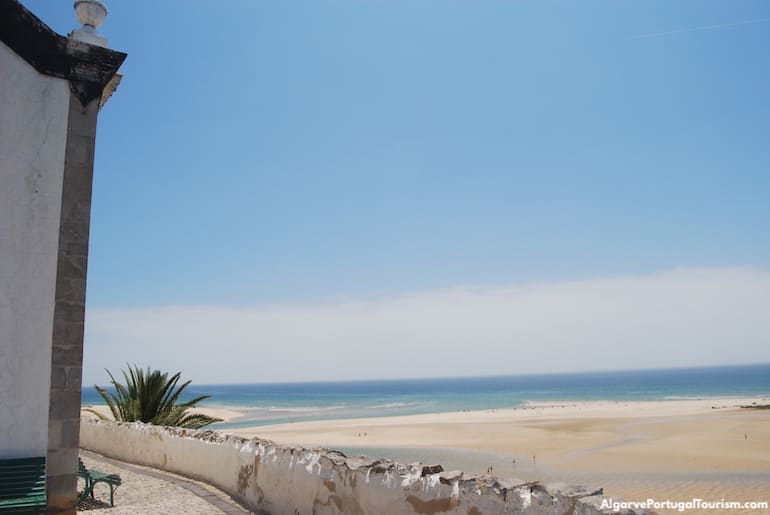 Ilha Deserta isn’t Algarve’s only island. There’s another one (which until recently was a peninsula) across from the village of Cacela Velha. It’s part of the same natural park (the Ria Formosa Natural Park), and can be accessed by boat or walking across the wetlands from the hamlet when the tide is low. International publications often place its 2km-long beach on their lists of favorites in Europe and the world, but thankfully the masses have yet to discover it. It has grown in popularity but you can still have plenty of space for yourself and a very relaxing atmosphere. You can see it all from the tiny hamlet, which stands on a hill. It’s one of Algarve’s best-preserved sites, with just about a dozen houses, a small church and a fort from the 18th century. There are no hotels, but you can stay 15 minutes away in the pretty town of Tavira. 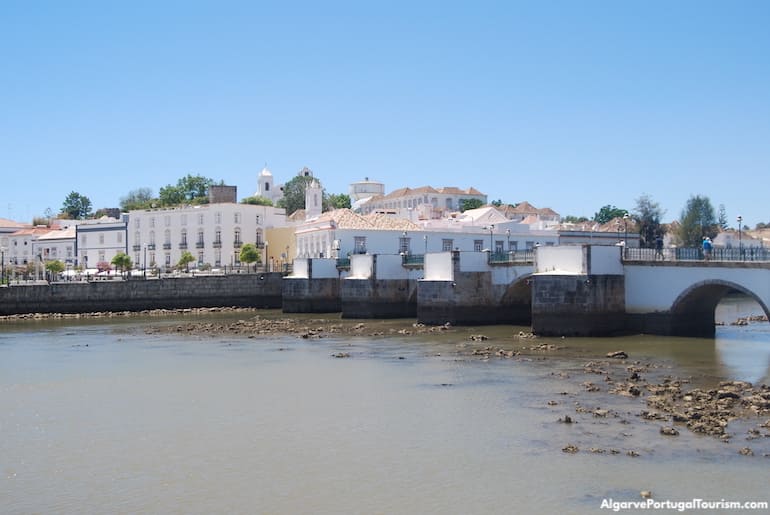 Widely considered Algarve’s most attractive and romantic town, Tavira preserves traditional architecture, cobblestone streets, Renaissance churches and the ruins of a castle. Its beaches are on two islands and are some of the finest in Algarve. They have a seemingly-endless landscape of dunes and, due to their size, are never crowded. The average water temperature is a couple of degrees higher than elsewhere in Algarve, making them great for swimming. The farther you walk from the piers and access points, the more deserted they get, and one of them is a very peaceful nude beach. 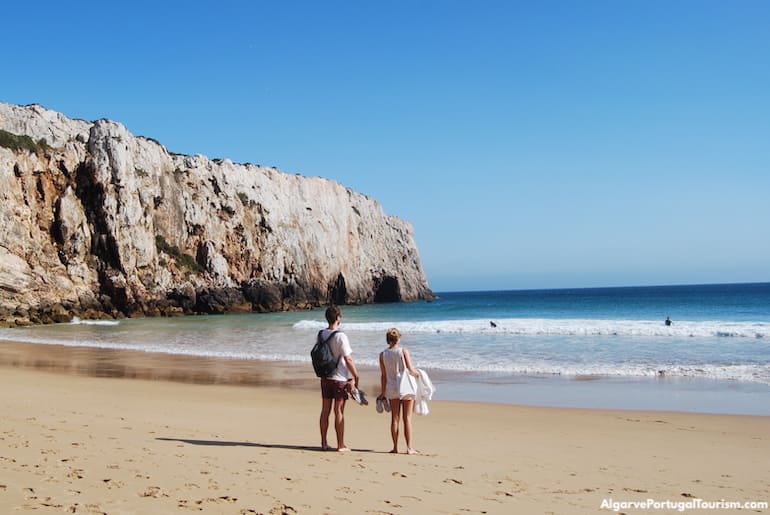 Prove to your partner that you’re willing to go to the end of the world with them, by heading to Sagres. This town on Algarve’s (and Europe’s) southwesternmost tip was believed to be the edge of the Earth before the planet was known to be round. It’s now a place of romantic pilgrimage and a historic site, as it was where Prince Henry the Navigator lived and planned voyages into the unknown during the 15th-century “Age of Discovery.” The prince’s fortress is still there, and nearby is Cape St. Vincent, which the Romans called Promontorium Sacrum, or “sacred promontory.” Here you have one of the best sunsets in Europe and there are beaches with dramatic landscapes. It’s the southern end of Costa Vicentina, which is Europe’s last wild coast, where you can have miles of sand all for yourself. 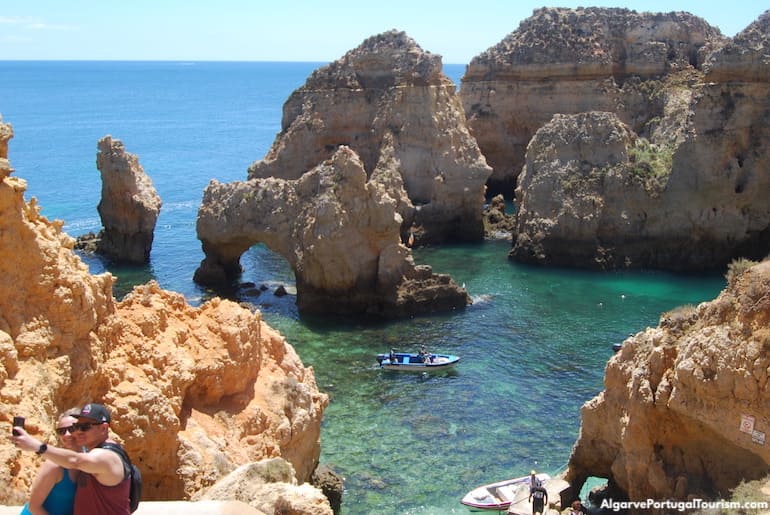 Sagres’ coastline can be seen from the top of the Ponta da Piedade headland in Lagos. Especially romantic at sunrise (when it’s much more peaceful, without the crowds), it’s one of Portugal’s most beautiful sights. Its spectacular rock formations, caves and grottoes have been sculpted by the sea and wind for thousands of years, and you can get close-up views on a boat tour. Keep walking over the cliffs and you’ll reach Praia do Camilo, one of the most scenic beaches in Algarve, and a short walk from there is Praia da Dona Ana, one of the most famous in the region. Hidden between Ponta da Piedade and Praia do Camilo is Praia dos Pinheiros, a beautiful but secret beach that’s not easy to reach, used for nude sunbathing. 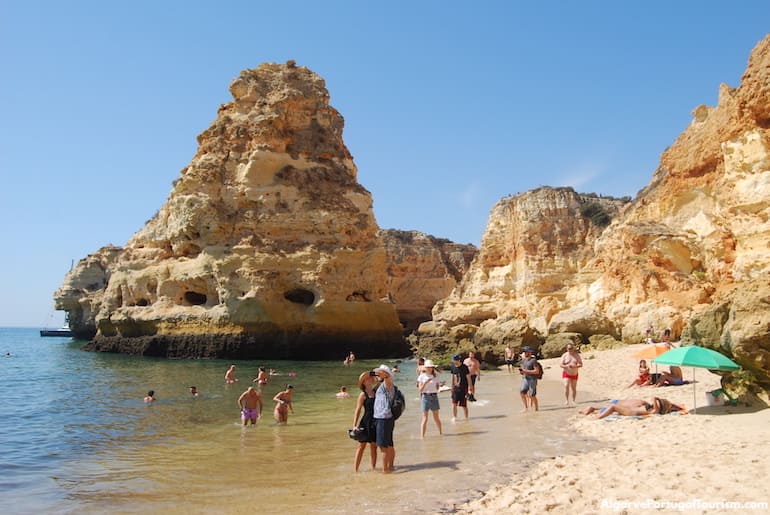 One of the world’s most romantic beaches is in Algarve. Praia da Marinha is famous for its scenery of intriguing rock formations, especially a double arch that, when seen from the perfect angle at the top of a cliff, forms the shape of a heart. Naturally, this attracts couples, but even without that curious sight, it would be a beach for anyone on a romantic break. It’s widely considered the must-see beach in Algarve, and there’s a trail over the cliffs offering some of the most breathtaking views. 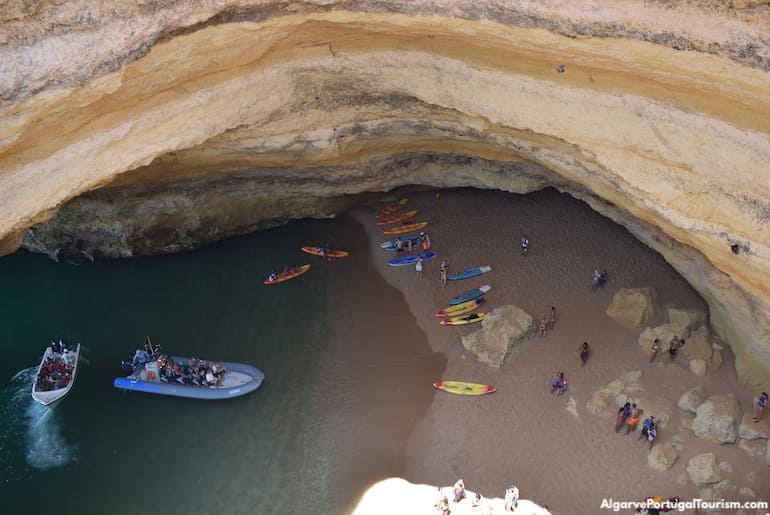 The trail from Praia da Marinha leads to Praia de Benagil, a beach that’s the main access to the most famous attraction in Algarve. That’s the Benagil Cave, a spectacular sight created by nature that resembles a domed temple. Filled with light thanks to a skylight created by erosion, it encloses a beach and is reached by kayak or small boats. Go early in the morning to have it mostly for yourself. 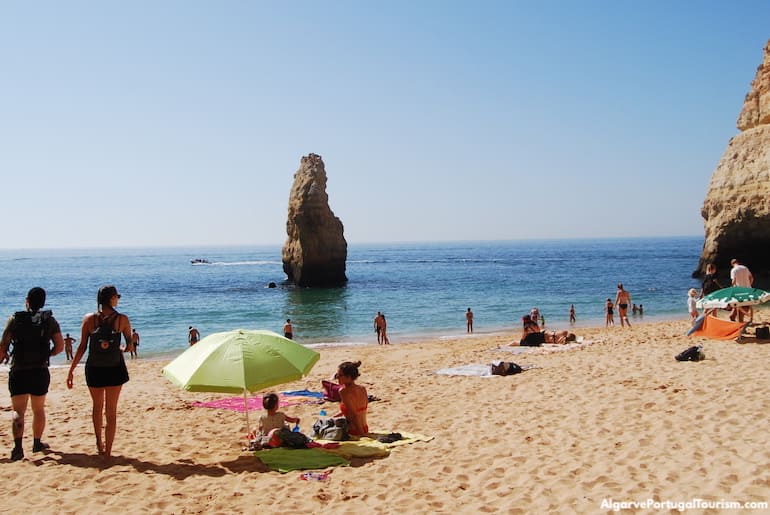 This small beach is accessed via a “secret” tunnel hidden on the ground, which gives it a magical, fairytale atmosphere. It’s quite scenic, surrounded by tall cliffs and with a perfectly-centered rock in the sea. Daredevils jump from the cliffs, while others snorkel when the water is calm and crystal-clear. If you continue walking east over the cliffs, you’ll reach the beaches of Benagil and Marinha, and enjoy some of the best views in Algarve. 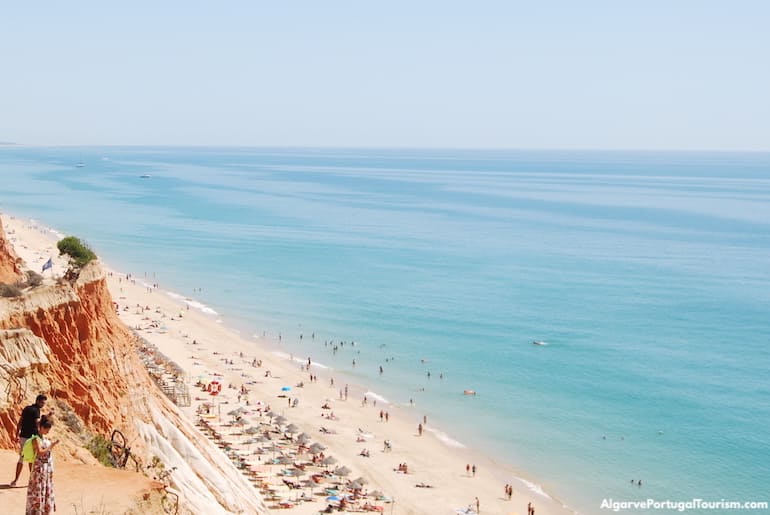 One of Algarve’s longest beaches (it’s close to 6km or about 4 miles long) is also one of its most beautiful, especially when seen from the top of the red and ocher cliffs behind it, that rise up to as much as 40 meters (about 130 feet). If the Grand Canyon had a beach, this is probably what it would look like. The cliffs are covered with pine trees and in the surroundings are several romantic hotels and resorts (Epic Sana Algarve, Pine Cliffs Hotel, and the adults-only Falésia Hotel are the most recommended). For a really unforgettable experience, visit the clifftops at sunrise or sunset. 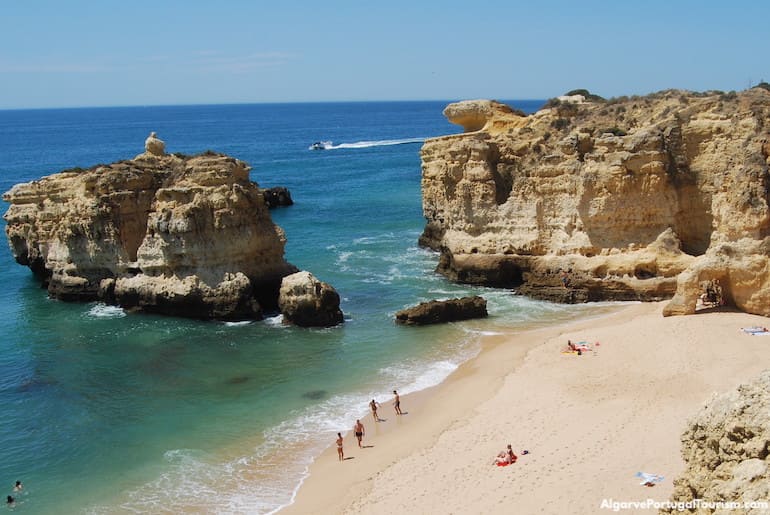 Ocher rock formations, soft golden sand and shallow waters make this beach one of the most recommended in Algarve. You’ll find many young couples here, not just because of the natural beauty but also because of the attractive hotels nearby (São Rafael Atlântico, São Rafael Suites, and São Rafael Holidays). Stay for the sunset, and don’t leave without admiring the views from the top of the cliffs. 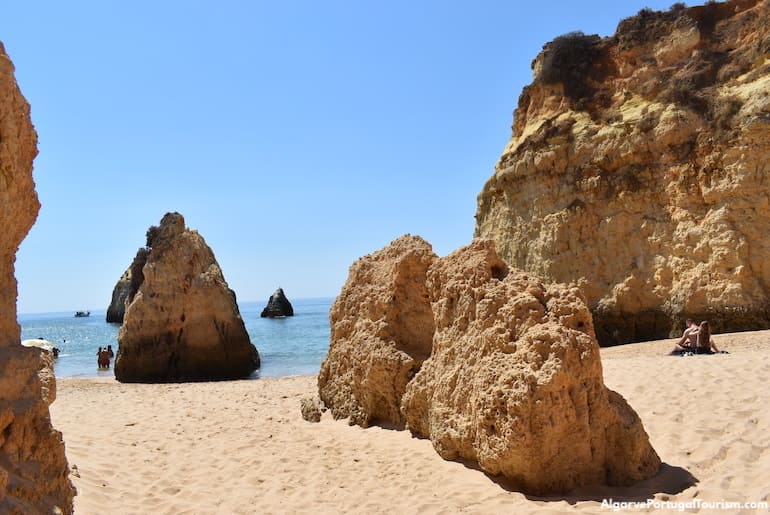 If you just can’t get enough of Algarve’s rock formations, head to this beach and make sure you also see it from above. The clifftop views are magnificent, and there are caves to explore down by the sea, where you’ll find love messages carved on the walls. The shell-shaped coves, the arches and other formations are popular backdrops for selfies. 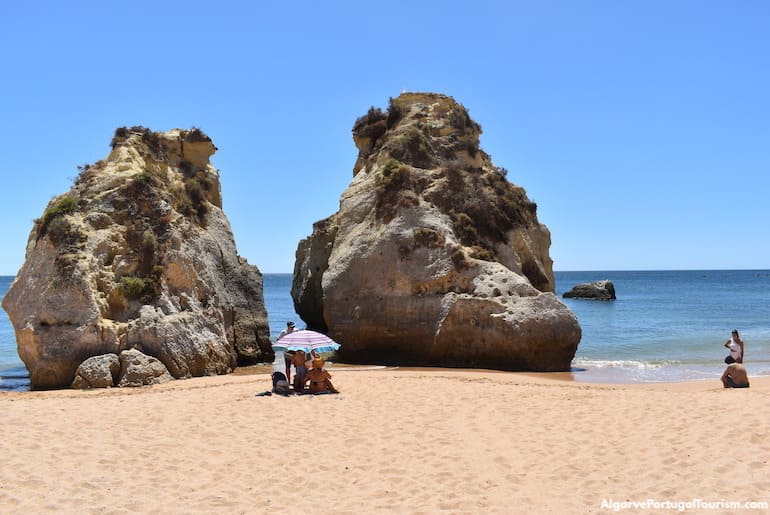 Yet another beach for lovers, Praia dos Beijinhos (“Kisses Beach”) is small and secluded. Hidden and sheltered by cliffs and rocks, it’s never crowded, and frequented almost exclusively by the guests of the luxury (and very romantic) Vila Vita Parc resort. This is one of the best places to stay in Algarve, with sea views, sophisticated restaurants, a state-of-the-art spa to unwind as a couple, and subtropical gardens surrounding a swimming pool. 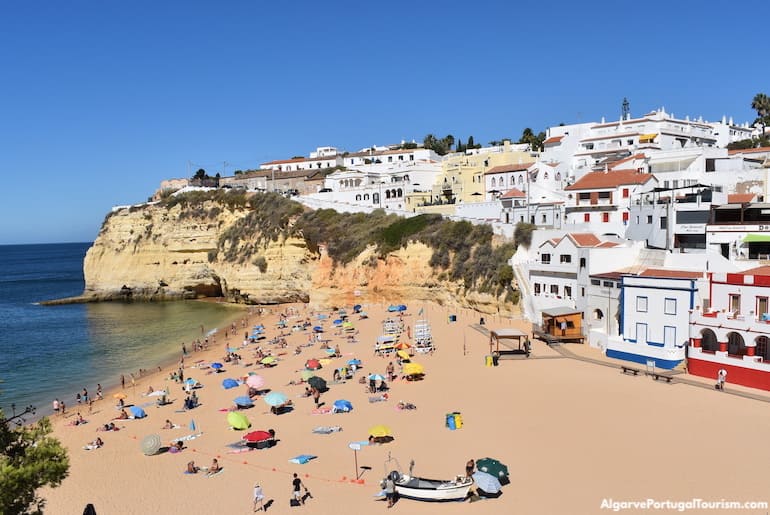 Despite having grown into a sizable resort town, Carvoeiro has maintained much of the scenery of its past as a traditional Algarvian fishing village. There are still fishing boats on the picturesque beach in the center of town, and it’s white villas and not highrises that you’ll see perched on the sandstone cliffs. A coastal boardwalk leads to Algar Seco, a fascinating rocky landscape above the sea, shaped by the winds and waves over the centuries. That’s the perfect sunset spot, to relax after a day at the beautiful beaches in the area, which include Praia da Marinha and Praia de Benagil. 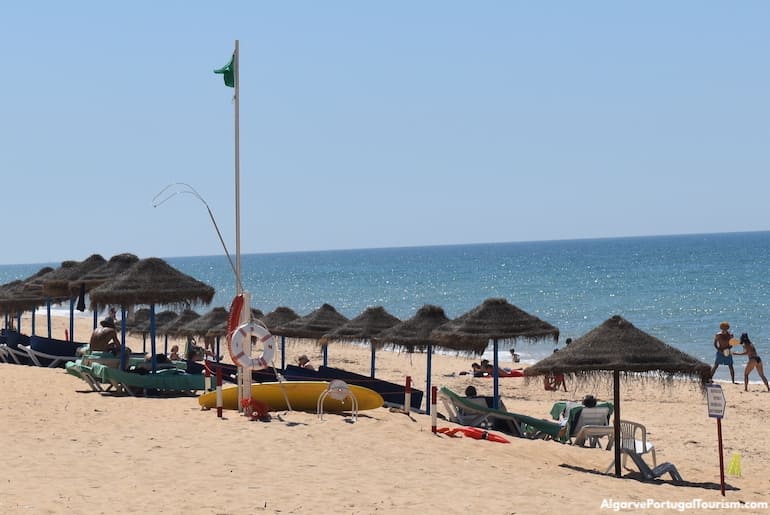 Quinta do Lago is one of the most luxurious resort towns in Europe, so the perfect place to impress a special someone. It’s home to some of Portugal’s grandest hotels, sophisticated restaurants, and a quiet beach with an exclusive atmosphere. It’s on the western end of the Ria Formosa Natural Park, and you can follow a trail that goes through a beautiful landscape of salt marshes and lagoons. To reach the beach you have to walk across a wooden footbridge, from where there’s a romantic sunset view. To make the experience really memorable, stay at the Hotel Quinta do Lago or at the Conrad Algarve.

See the Quinta do Lago Guide.