The Best Things to See and Do in Algarve 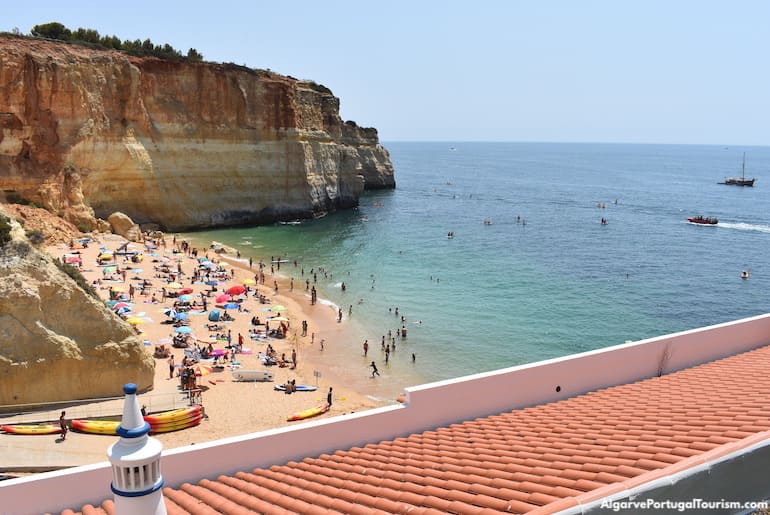 Algarve is the perfect summer escape, offering a variety of experiences. There are all kinds of beaches (with breathtaking sceneries, for surfing, for naturism, in wild coasts or on picturesque fishing villages), monumental caves and rock formations to explore on boats, nearly-deserted dune islands, world-class golf courses, historic monuments, water parks and entertainment for all ages. All this under abundant sunshine and at prices for all budgets. Don’t limit your stay to just one town, as the region is great for a multi-destination vacation. If you rent a car you can explore the entire region in a few days, and by train or bus you can reach most of the main towns. Below are the ten greatest attractions in Algarve. 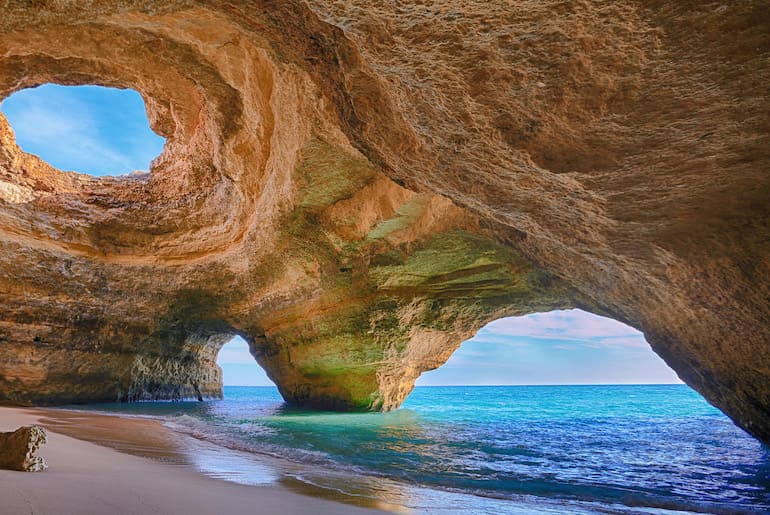 This cave is what many people put at the top of their list of must-sees in Algarve. It resembles a domed temple with an open skylight, as if the forces of nature were inspired by Rome’s Pantheon. The natural wonder encloses a beach and is accessed by boat through two arched openings. Considered one of the most extraordinary sea caves in the world, it has become Algarve’s most famous sight. The neighboring beach and others in the area offer boat and kayak tours. Some of these tours continue along the coast, past other caves and imposing cliffs, and you may even spot dolphins on the way. 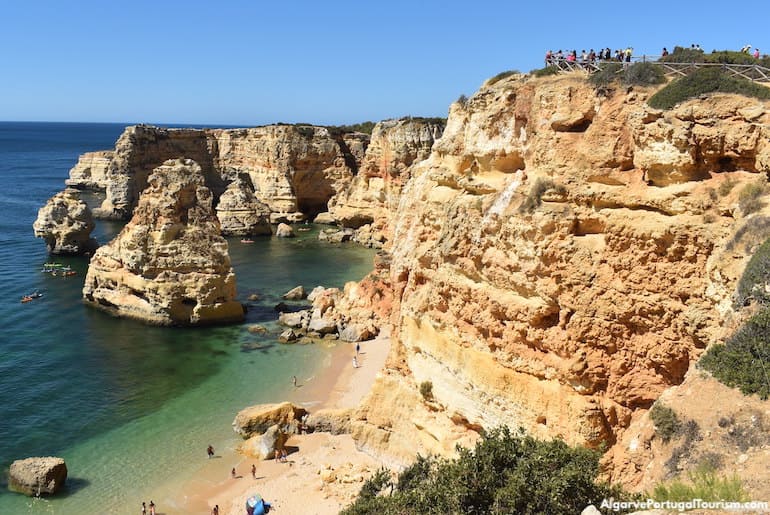 Widely considered the must-see beach in Algarve and one of the most beautiful in the world, Praia da Marinha is a natural spectacle of intriguing rock formations. It’s a popular backdrop for advertisements, and the shape of a heart formed by the rocks (when seen from the right angle) illustrates postcards and tourism brochures. Space for sunbathing is limited when the tide rises, but most people spend their time taking photos in the turquoise water and exploring the rock formations anyway. It’s even more impressive from above, following a trail over the cliffs. Named “Seven Hanging Valleys,” the trail offers truly breathtaking views and continues to other beaches to the west, including Praia de Benagil, where you can hop on a boat and visit the famous cave. Even if you don’t go all the way to Benagil, the trail is an experience that no nature lover or hiker should miss. 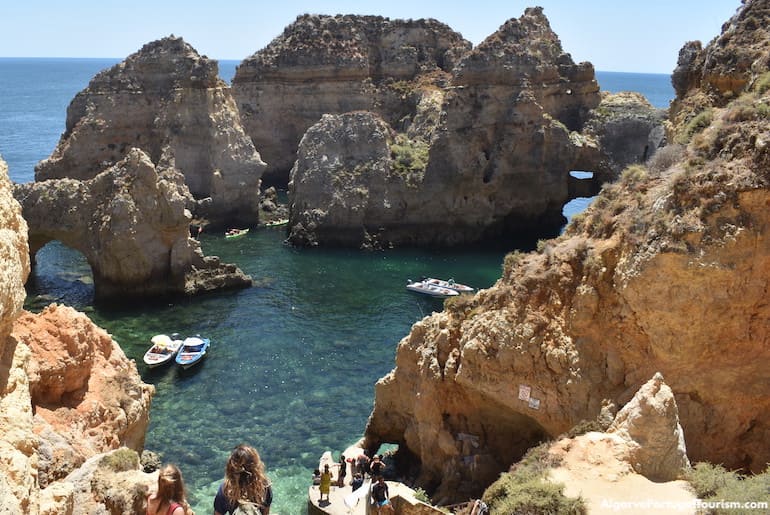 The Ponta da Piedade headland is one of Portugal’s most photographed and beautiful sites. Sculpted by the sea and the winds for thousands of years, its rock formations (some as tall as 20 meters, or 65 feet), grottoes and caves are best seen on boat or kayak tours, but a long staircase with 182 steps also offers access down to water level from the top of the sandstone cliffs. There are views of the entire Lagos coastline and beyond to Sagres (see below), and a short walk away is a series of magnificent beaches. The closest one is Praia dos Pinheiros, which remains a somewhat secret nude beach, and then there’s the picture-perfect Praia do Camilo, where everyone stops for selfies. Nearby is Praia da Dona Ana, one of Algarve’s most famous beaches, also characterized by golden rock formations and scenic views. 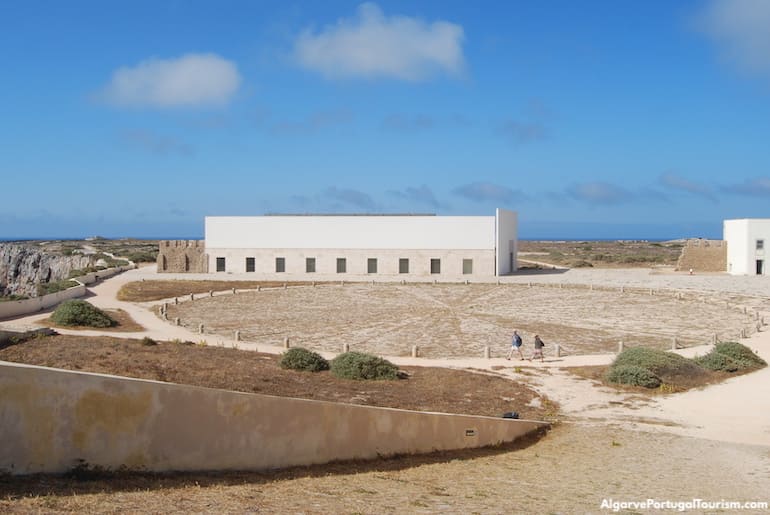 Thought to be the edge of the Earth before the planet was known to be round, the small town of Sagres retains an end-of-the-world feel. Located by Cape St. Vincent, which is the southwesternmost tip of Europe, it has a laid-back, bewitchingly calm atmosphere and is often a perfect ending to a trip to Algarve. It has some of the region’s most dramatic scenery and is home to its most visited monument -- a fortress high above the ocean, which was where Prince Henry the Navigator planned the voyages that ended up mapping much of the globe. It mainly attracts the surfing crowds, backpackers and naturists, thanks to its wild beaches surrounded by towering cliffs. Nearby are once-sleepy fishing villages, like Salema and Burgau, which have woken up to tourism but remain easygoing places, attracting those looking for the Algarve away from the resorts. 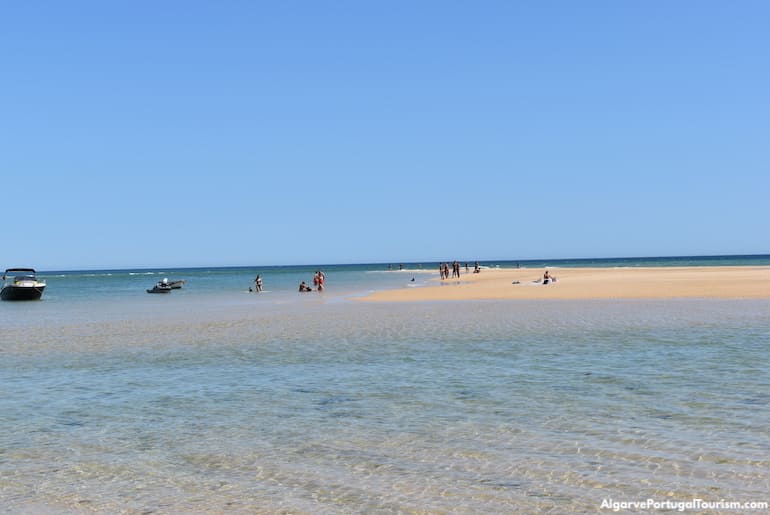 A maze of islands, lagoons, dunes, and marshes stretches for about 60km (close to 40 miles) in eastern Algarve. It’s a natural park, mostly visited for the beaches on the islands, but is also an exceptional destination to spot wildlife and to hike. Most of it is accessible by ferries, departing from Faro, Olhão and Tavira. On the way to the beaches you can spot flamingos, storks, chameleons (which are sadly becoming extinct elsewhere in Europe) and the world’s largest concentration of seahorses. This is also the native land of the Portuguese Water Dog, which was the breed chosen by U.S. President Barack Obama for the White House dog. The beach of the luxury resort town of Quinta do Lago is part of the park, but it’s those of the islands that truly stand out. They change shape and size depending on the tides and currents, but are all long stretches of white sand. Those closest to Tavira (Praia da Ilha de Tavira, Praia do Barril, Cacela Velha) are relatively popular, but the ones by Olhão and Faro (Ilha da Culatra, Ilha da Armona, Ilha da Fuseta) are often nearly deserted, with spots turned into nude beaches. 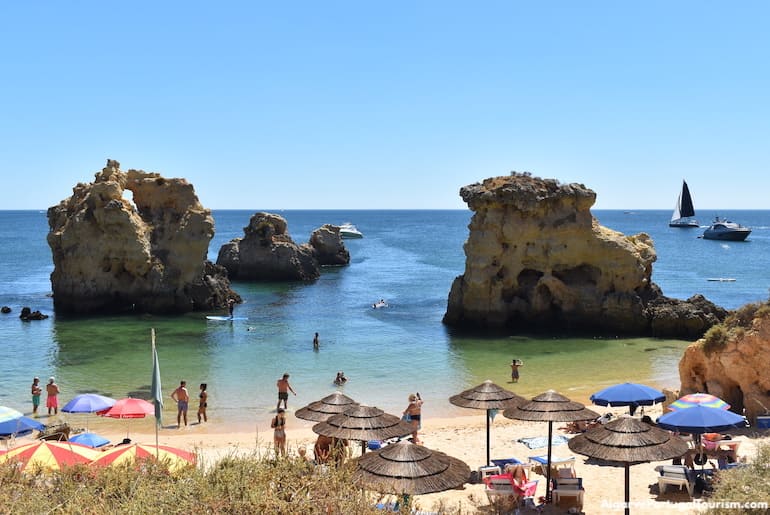 Once a quiet fishing village, Albufeira has become one of Portugal’s top tourist destinations, thanks to its splendid beaches and lively nightlife. It’s the tourist capital of Algarve, attracting people of all ages for some fun in the sun. It has the most beaches in the region (nearly two dozen), from the crowded ones by the Old Town to the secret ones hidden on its 30km(19 miles)-long coastline. As an alternative to or a break from the beaches, there are water parks nearby to keep children and adults entertained. Beach-hopping is the main activity, however, and the two that shouldn’t be missed are Praia de São Rafael and Praia da Falésia, both backed by cliffs offering breathtaking views from the top. Other exceptional beaches can be discovered on boat tours. 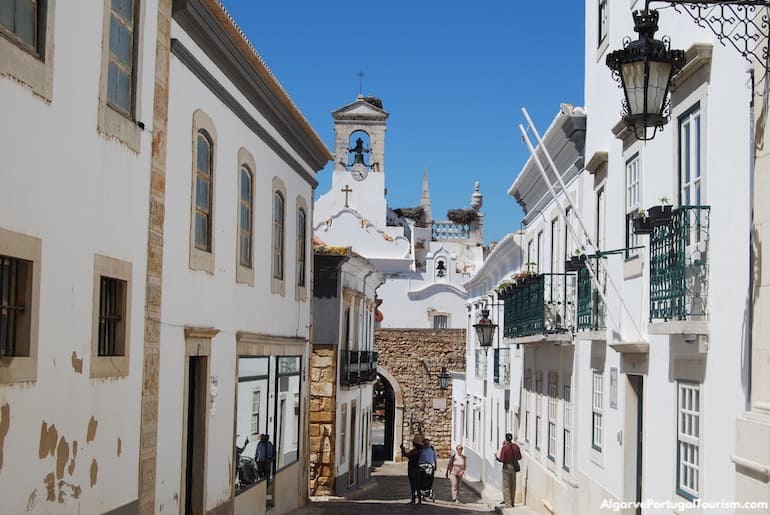 Algarve’s capital is home to the international airport, from where most tourists head straight to their resorts. However, it’s worth staying in the city for at least one day. The mostly pedestrianized Old Town is a delightful place, with stork nests, orange trees, the largest concentration of historic monuments in the region, and ferries to a deserted island with a wonderful beach. Right outside the city are the ruins of a Roman villa and a rococo palace. Those who like to combine beach and culture will find Faro to be the perfect destination. 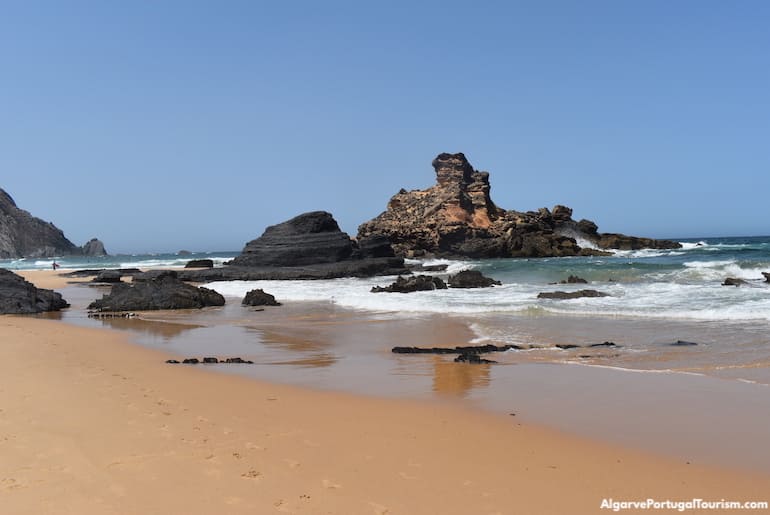 Europe’s best-preserved coastline is the continent’s “grand finale.” It’s by edge-of-the-world Sagres and has a wild, virgin landscape of rugged headlands, sea stacks, jagged cliffs, and wind-blown dunes barely touched by tourists. It’s a haven for naturists, surfers, and anyone who craves space, with few roads and hotels, but with lots of silence, sand and sea. It has a growing reputation for some of Europe’s finest surf, with a scenery that you’d associate more with Australia than Europe. Its designation as a natural park means that the natural beauty and unspoiled atmosphere are protected. Praia da Bordeira, Praia da Amoreira and Praia de Odeceixe are the top beaches. 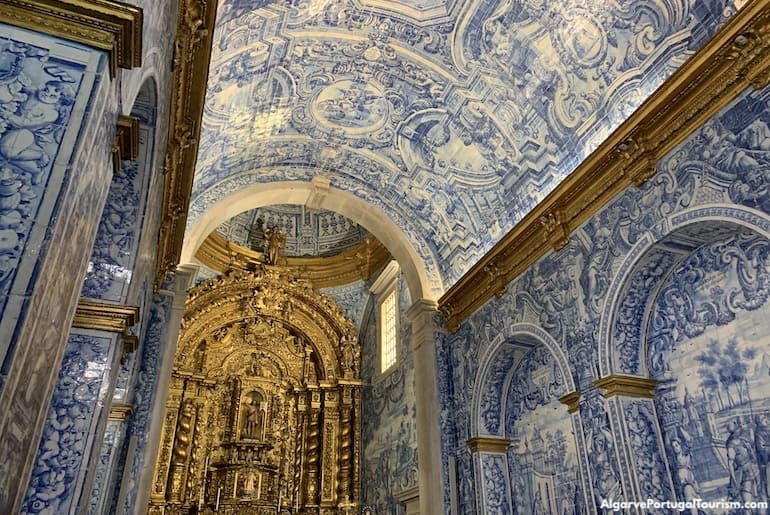 What looks like an ordinary little church from outside is actually one of the biggest cultural treasures of Algarve. The interior is a marvelous masterpiece of Portuguese art and European baroque, combining gilded wood and ceramic tiles from floor to ceiling. Built in 1730, it somehow escaped the earthquake of 1755 that destroyed the entire region and most of southern Portugal. The monumental tile panels illustrate scenes from St. Lawrence’s life, and even cover the small cupola, which is unique in the world. The extraordinary monument is in the town of Almancil, which is just 15 minutes from Faro, Quinta do Lago and Vale do Lobo. 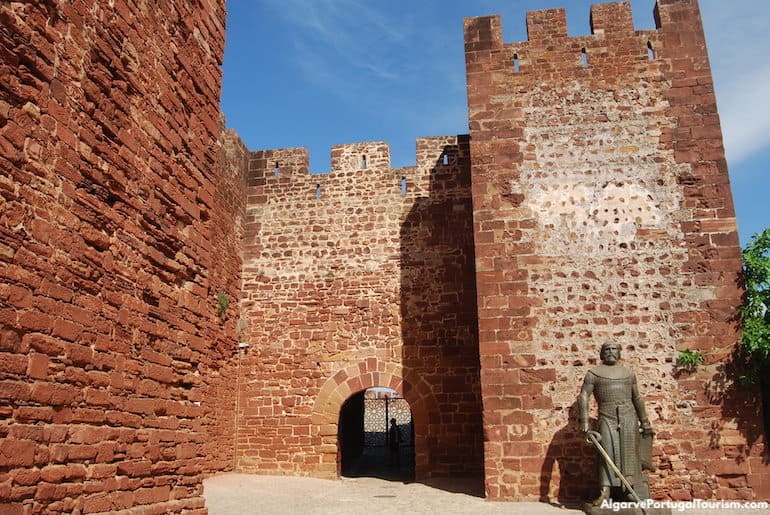 Several castles were built in Algarve over the centuries, to protect towns, watch over the border, or as governors’ residences. None survive intact to this day (mostly due to the 1755 earthquake), but the one in Silves is the largest and best preserved. Erected by the Moors in the 10th century, the red sandstone construction has two cisterns, one of them originally a Roman well. The towers and walls were restored in the 1940s, and there were archaeological excavations in the garden until 2009. It’s considered the most significant Moorish building in Portugal and the greatest ancient monument in Algarve. A bronze statue of King Sancho I, who conquered it for Portugal in 1189, welcomes visitors by the main gateway. Although now a small, sleepy town, Silves was actually Algarve’s capital before Faro, and is a popular day trip from Lagos, Albufeira, Portimão and Carvoeiro. In August, it stages a week-long medieval fair.