Monte Gordo beach guide, how to get there and where to stay 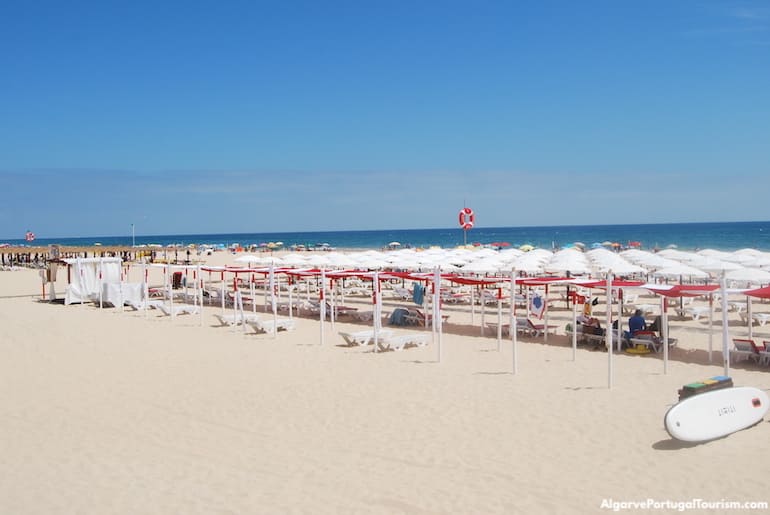 The long beach of Monte Gordo was one of the first to develop as a major tourist destination in Algarve, in the 1960s. Located just four kilometers (2.5 miles) from the border with Spain, it has been attracting a large number of Spanish tourists and Portuguese families for decades. Tourists from other nationalities seem to prefer to stay closer to the center of the region and the airport (mainly Albufeira and Vilamoura). It can be crowded in July and August, but its 1.5 kilometers (close to one mile) of white sand offer enough space for everyone. 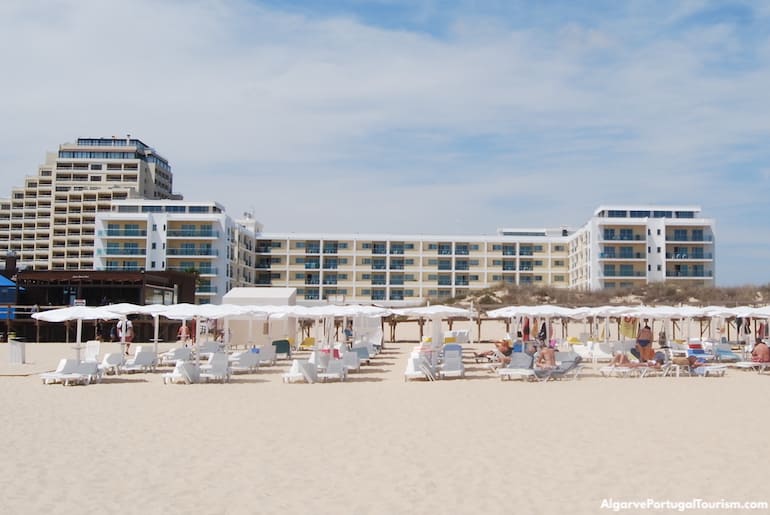 Monte Gordo’s biggest draw has always been the convenience of hotels and restaurants close to the beach. It also stands out for the lower prices of accommodation and meals, and for its water temperature, which is usually a couple of degrees higher than elsewhere in the region. This is a Blue Flag beach, meaning clean water is guaranteed. The sea is shallow and there are no rocks, so when it’s calm, it’s generally safe for swimming. There are lifeguards in the bathing season, which lasts from June to September. 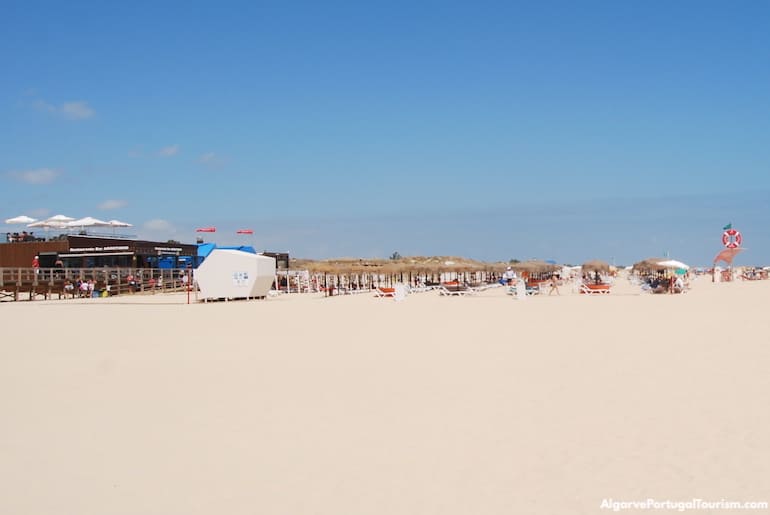 Unlike the central and western part of Algarve, here there are no cliffs, caves, rock formations, sand bars or islands. It is very flat and backed by dunes. Its skyline, which can be seen from miles away, is made up of tall buildings, mostly built in the 1970s, ‘80s and ‘90s to cater to tourism -- there’s even a casino. The only reminders of Monte Gordo before tourism are the many fishing boats and nets that local fishermen still leave on the sand. Early in the morning, you might even see them bringing in the catch of the day. Much of that fish is served at the local restaurants.

An elevated boardwalk over the dunes connects the different beachfront restaurants and provides access to the disabled. It stretches for three kilometers to the east and west of the main beach area, and is the longest in eastern Algarve. Here you can also rent water sports equipment. On the sand are loungers and parasols that can also be rented for the day.

Surprisingly for such a major tourist town, the atmosphere is quite relaxed, and it doesn’t even have the lively nightlife of Albufeira or Vilamoura. This is not a destination for groups of partiers or tourists looking to experience a traditional Portuguese town. It’s essentially for families who just want to spend some days in the sun and like to have everything within walking distance. It doesn’t have the water parks of central Algarve, but for breaks from the beach, there are some cultural attractions nearby, such as the castle of Castro Marim, the historic center of Vila Real de Santo António, or, about 25 minutes away by car or train, the beautiful town of Tavira. For a longer trip, you can even be in the Spanish city of Seville in just over 90 minutes!

How to Get to Monte Gordo


Monte Gordo is very easy to reach by car or public transportation. It’s a 45-minute drive on the A22 highway or about one hour on road N125 from Faro, and 25 minutes from Tavira on both the A22 and the N125. There’s plenty of parking by the beach. By train it’s about one hour from Faro and 25 minutes from Tavira (there are a dozen daily departures). The train station is about a 10-minute walk from the center. There’s also a bus from Faro to Vila Real de Santo António that stops in Tavira and Monte Gordo. That’s number 67, operated by Vamus, but it takes over 90 minutes to reach Monte Gordo from Faro and close to 35 minutes from Tavira, so the train is the better option. There’s no bus station in Monte Gordo, only a main bus stop by a roundabout at the end of the main pedestrian street, Rua Pedro Álvares Cabral.


Keep walking east (to the left when facing the sea) from the beach of Monte Gordo for about a half hour and you’ll reach the calm Praia de Santo António in Vila Real de Santo António. To the west is Praia do Cabeço and then Praia Verde, both known as family-friendly beaches. 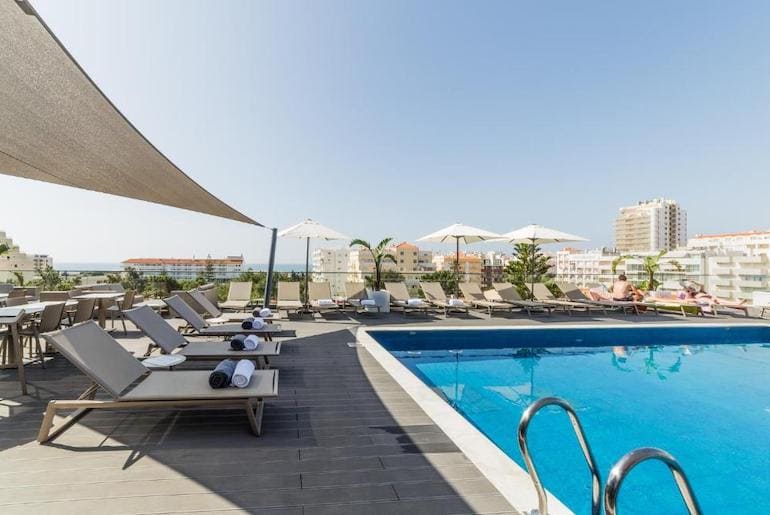 The best hotel in Monte Gordo is a 2-minute walk from the beach. It features a rooftop pool and bar offering live music, happy hours, sunset parties and weekly yoga classes in the morning. Its 105 rooms have balconies and are decorated with soft colors. The restaurant focuses on healthy meals, using fresh, local products, including fish from the Algarve coast. There’s also a spa with an indoor pool. 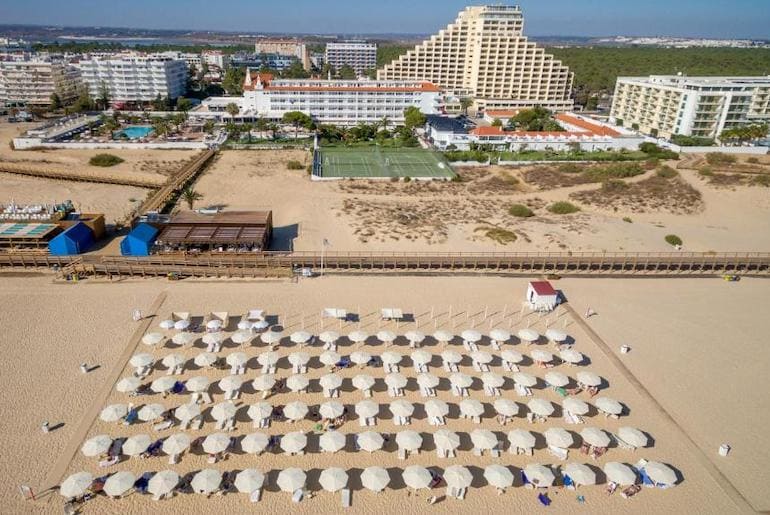 Monte Gordo’s oldest hotel was also one of the first in Algarve. Built in the 1960s, it’s right on the beach and has double rooms and 1- and 2-bedroom apartments. Many have balconies and sea views. It’s rated three stars but has two tennis courts, a gym, a restaurant with outdoor seating, and two outdoor swimming pools. 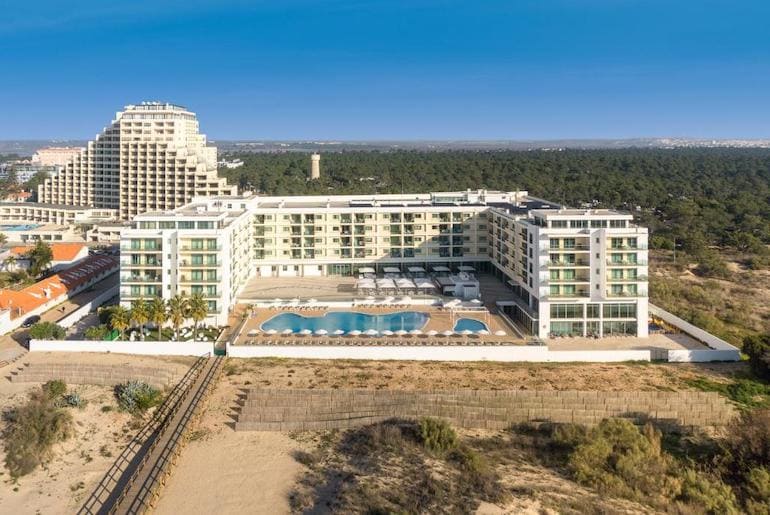 Divided into 1- and 2-bedroom apartments with balconies, this hotel was built on the dunes, facing the ocean. It’s on the quieter eastern end of Monte Gordo and has a pine forest behind it. Most of the apartments offer a sea view, as does the outdoor swimming pool. Inside is a health club with a pool and a sauna, and a restaurant. 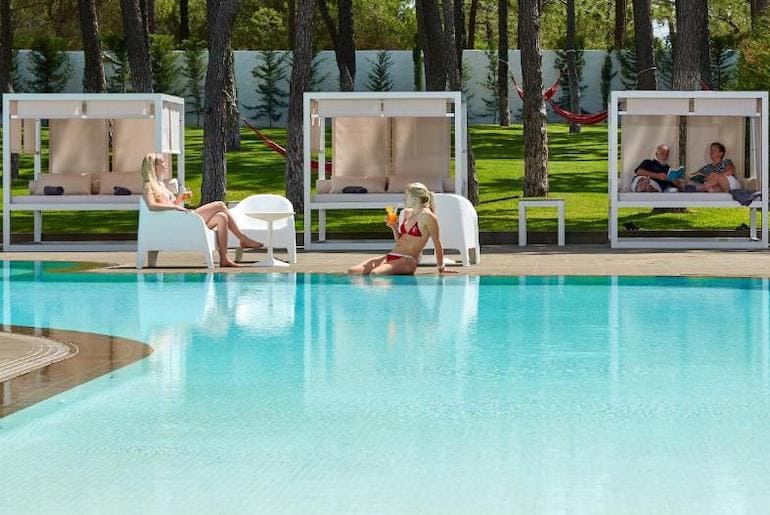 The beach is just a 4-minute walk from this hotel with two outdoor pools, a spa, a fitness center, and a restaurant serving Mediterranean cuisine. Some of the spacious rooms and suites have a balcony. 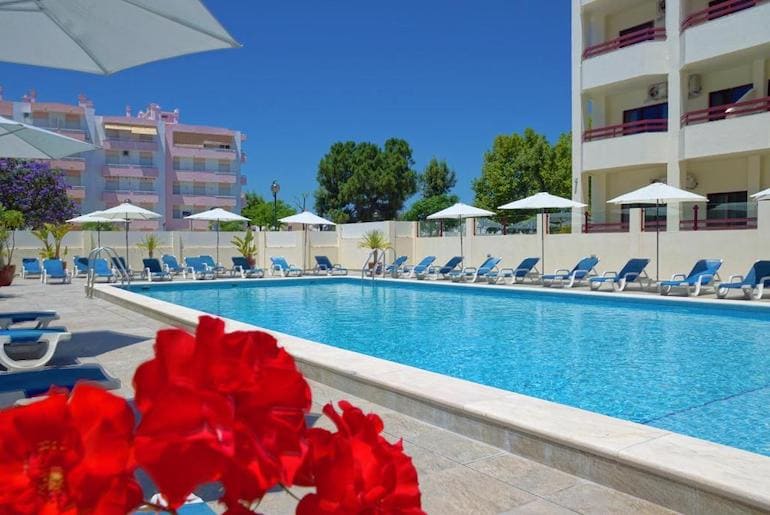 This hotel is a 5-minute walk from the beach. Its location in the center of town is also convenient for the main bus stop, the train station and restaurants. It has bright double/twin rooms and studios, all with balconies. There are outdoor and indoor pools, a gym and a spa. 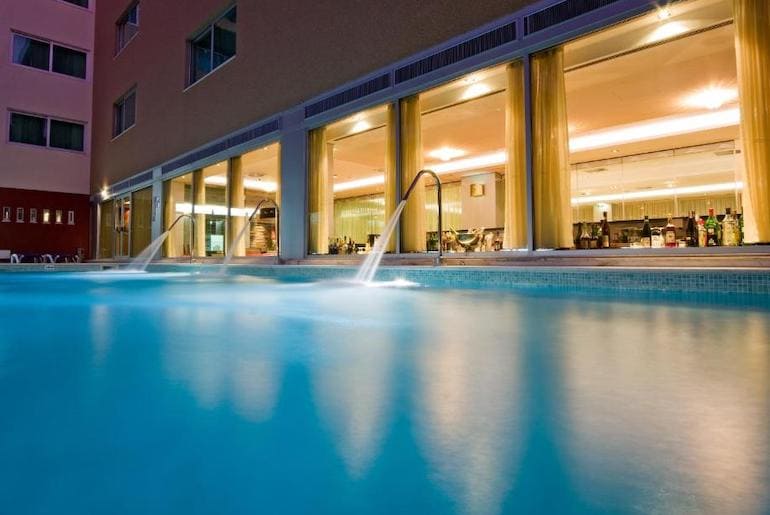 One of Monte Gordo’s most recent hotels, it’s also a short walk from the beach. It features an outdoor swimming pool, which remains open but is covered outside the summer months. The rooms and apartments are contemporary, and some overlook the pine forest on the eastern side of town. The spa includes a sauna and a Turkish bath.