Portimão tourism guide, how to get there and where to stay 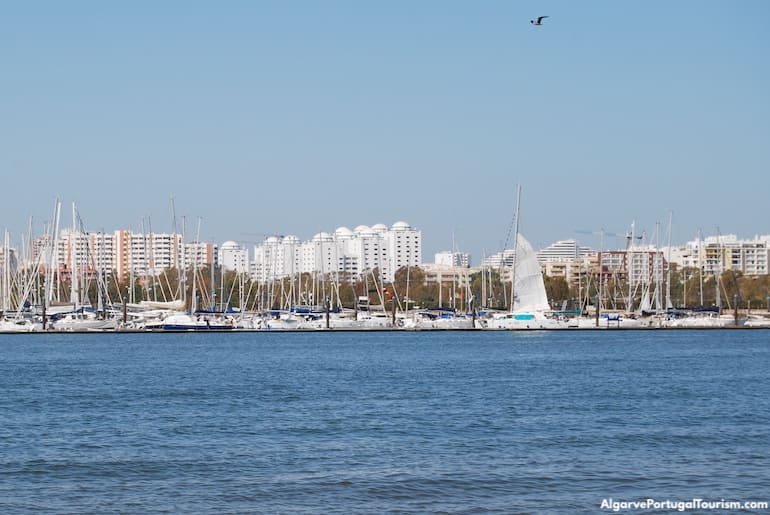 Portimão is the second largest city in Algarve, and while it lacks the charm of historic towns, it has some of the best beaches in the region. Once a fishing and industrial town, it turned to tourism in the second half of the 20th century and is now a sprawling port city. 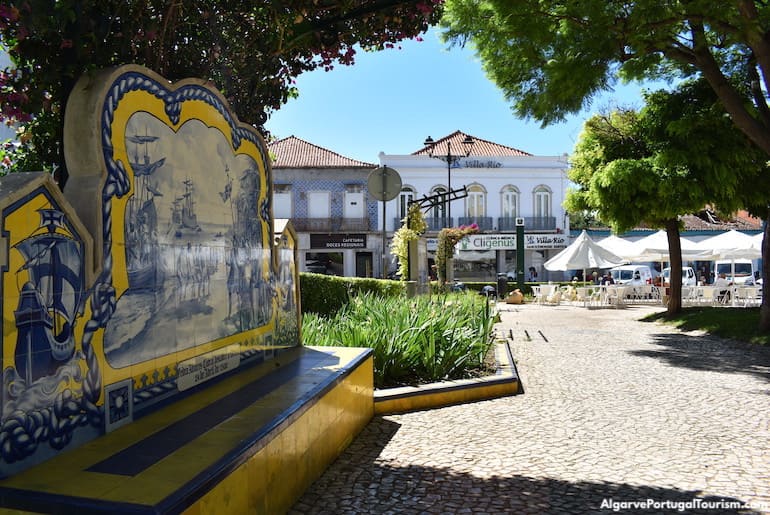 The landscaped Largo 1º de Dezembro and the large Praça da República are the main squares. In the first one you find the tourism office and tiled benches illustrating episodes from the history of Portugal, while the second is faced by the city’s largest landmark, a church of a former Jesuit college. Nearby is the parish church from the 16th century, and to the south, close to the riverfront, is the Portimão Museum, housed in a former fish-canning factory and dedicated to the history of the city. What’s left of the old fishing quarter can be found on and around Rua da Barca, with a strip of seafood restaurants under the arches of a bridge. 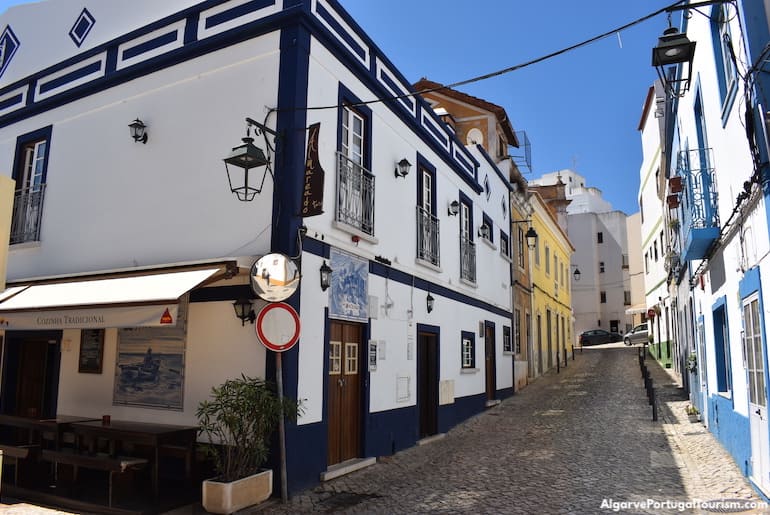 Down where the Arade River meets the Atlantic is a marina, and the first of the city's beaches, Praia da Rocha. It’s one of Portugal’s most famous, with towering rock formations, a 17th-century fort, and a boulevard lined with restaurants, bars, shops, clubs, and hotels with sea views. From here it’s possible to walk west to a series of other, quiter, beaches. 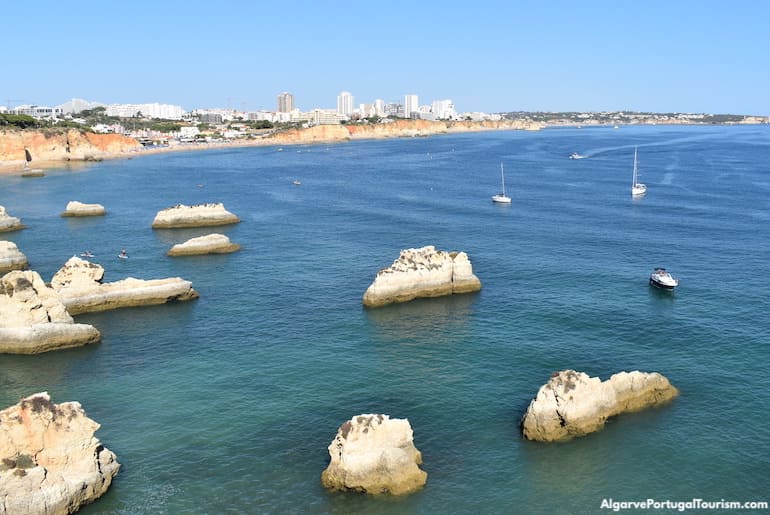 Continuing west you reach the district of Alvor, which looks and feels like a different town. It preserves an old quarter with a 16th-century church, and is where many people choose to stay, due to the hotels close to a number of beaches. 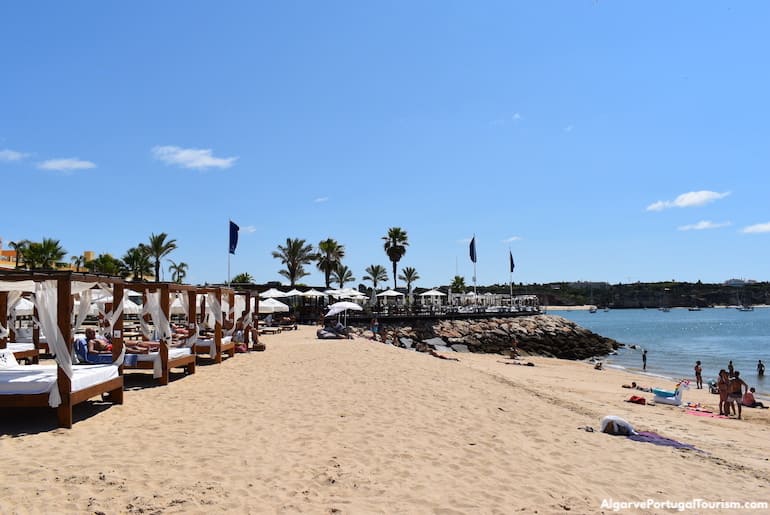 In the first week of August, Portimão hosts one of the most popular events in Algarve. The Sardine Festival takes place on the riverfront, and mixes live music and dancing with outdoor dining (mostly sardines, obviously!). 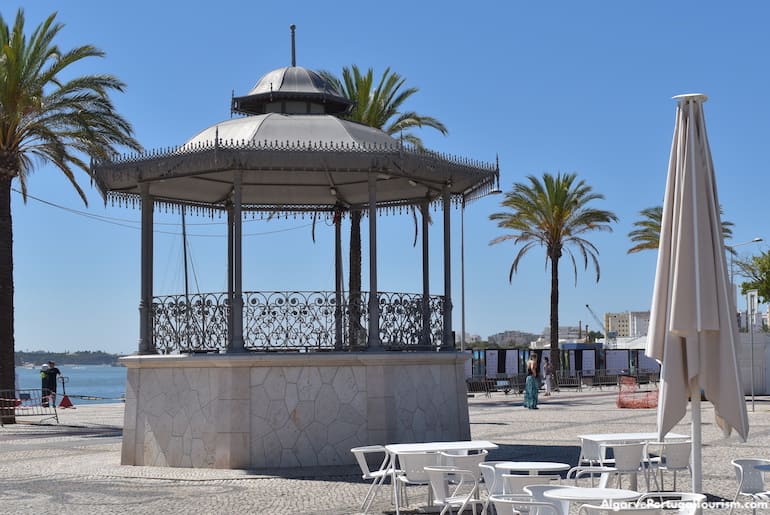 Things to See and Do in Portimão 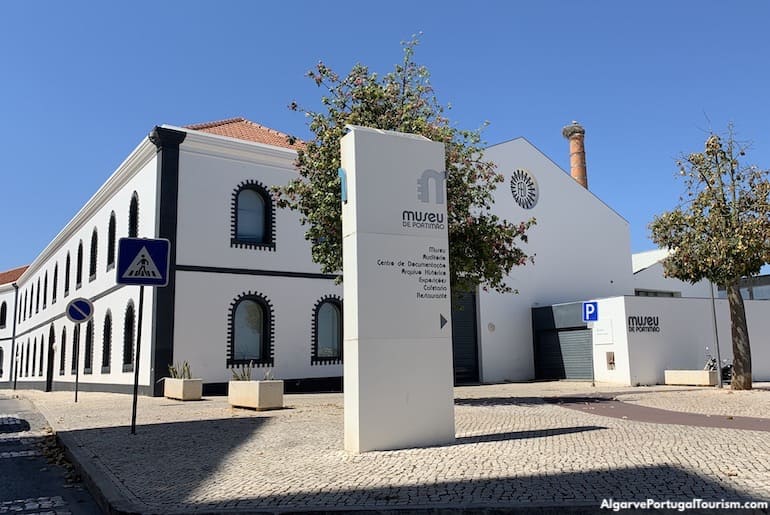 Portimão’s largest sardine canning factory closed in the 1980s but became an award-winning museum in 2008 to explain the fish canning industry in the city and local history. It shows the restored production lines and artifacts found around the region (many of them underwater), dating back to prehistoric and Roman times. Everything is labeled in Portuguese and English. 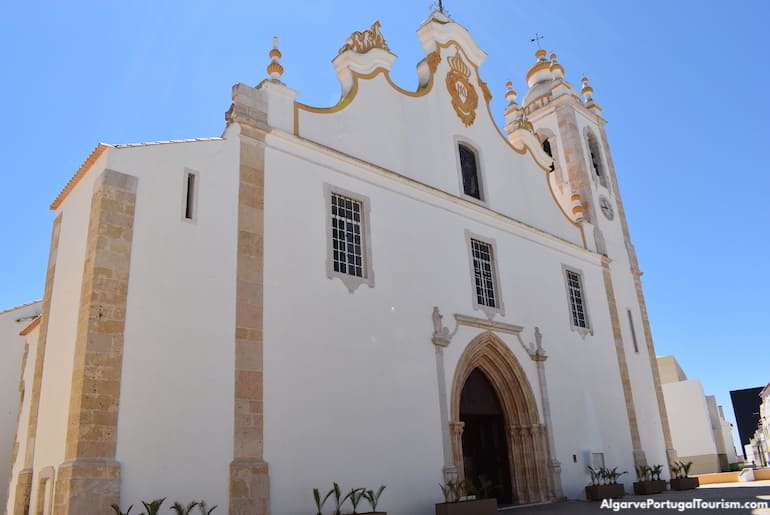 Portimão’s main church dates back to 1470, and preserves the original gothic portal. Everything else had to be rebuilt after an earthquake in 1755, which devastated most of southern Portugal. The interior features a baroque altarpiece in gilded wood, while the side chapels blend the baroque and the rococo of the late 18th century. 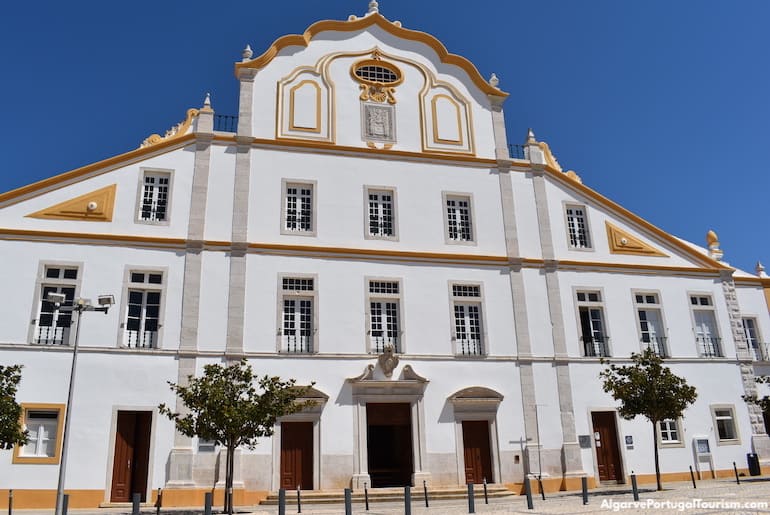 Portimão’s Jesuit college, built in the 17th century, was one of Algarve’s main educational centers for close to 100 years. The imposing building includes a large church from 1660, with a simple interior, typical of Jesuit temples. The Jesuits were expelled from Portugal in 1759, and the church was embellished with baroque altarpieces. The former college now houses social services, but the church is open to visitors on weekdays. 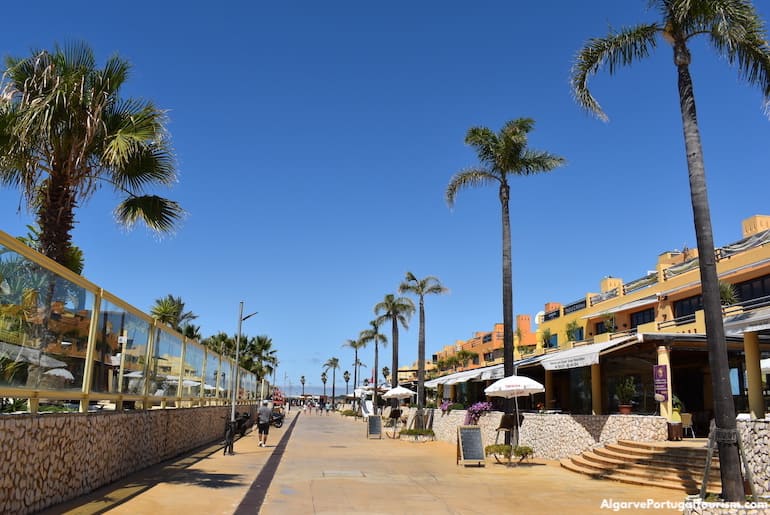 Portimão’s marina is found to the east of Praia da Rocha. It has its own small beach, and a number of restaurants with outdoor seating. It’s a popular destination at night, and offers a view across the Arade River to the village of Ferragudo. 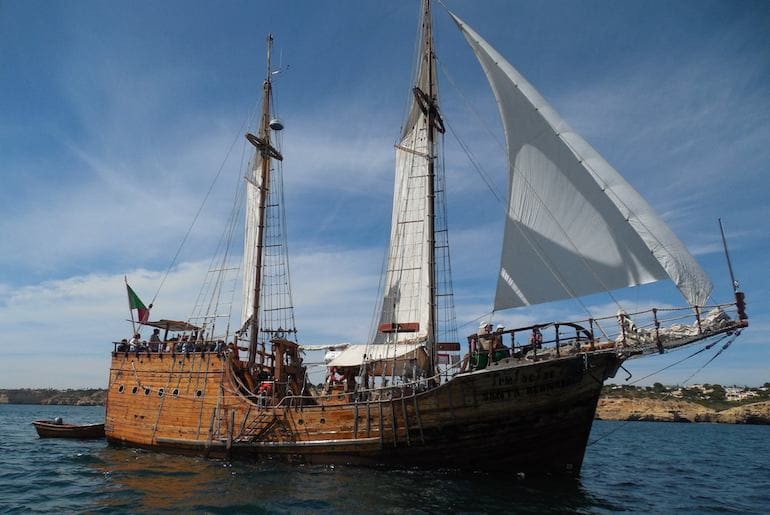 A replica of a Portuguese 15th-century caravel or a “pirate ship” takes tourists around the coast and stops at the beautiful caves in the region, including the famous Benagil (on days when the sea is rougher, it’s not possible to enter the caves, but it still sails past them). The 23m-long boat departs from Portimão’s harbor (Rua Gonçalo Nascimento) and has wheelchair access. The tours last about 3 hours, and there’s one in the morning and another in the afternoon. Book them here: Morning Tour or Afternoon Tour


Portimão has a long coastline divided into several beaches, which are among the most popular in Algarve. The most famous is Praia da Rocha, but those to the west also offer a scenery of golden rock formations and are among the most beautiful in Portugal. They can all be discovered on a pleasant walk, following the top of the cliffs, all the way to the João de Arens headland, already in Alvor. See the Portimão beaches guide.

How to Get to Portimão


Portimão is a 1-hour drive from Faro on highway A22, and a half hour from Lagos, following road N125 or the A22. About 10 trains per day connect it to Faro, taking about 90 minutes. Bus 57, operated by Vamus, departs from Faro’s bus station to Lagos, and stops in Portimão in 1 hour and 45 minutes. If you’re relying on public transportation, the train is the better option, since not only is it faster, there are more departures throughout the day. If you’re heading straight to Portimão from Faro Airport, follow the instructions on this guide: Faro Airport to Portimão or Praia da Rocha
From Lisbon, there are express buses departing from the Sete Rios terminal, taking between 3 hours and 3 hours and 45 minutes, depending on how many stops they make in between. There are no direct trains between the capital and Portimão -- you have to take the train to Faro and then connect to the regional train. The train station in Portimão is fairly central, within walking distance of the main squares. The bus station is right behind it, on Rua da Abicada.


If you’re staying on or around Praia da Rocha, which is where most hotels are located, you can walk to just about anywhere. If you’re staying closer to the center of town, you need to walk for 20 to 40 minutes to the beaches. To go to Alvor, take the “Vai e Vem” bus 13 or 14, which departs from Largo do Dique. These buses only operate on weekdays, but number 1P covers most of the same route on Saturdays. Another option is a taxi or Uber, which are quite inexpensive. Buses 31 and 32 stop at the train station on weekdays and go through the center of the city. On weekends, that route is covered by bus 37.


Since everyone visits Portimão for the beaches, almost all hotels are not in the center, but down by the marina, Praia da Rocha and the coast to the west. There are choices for all budgets, and these are the best ones: 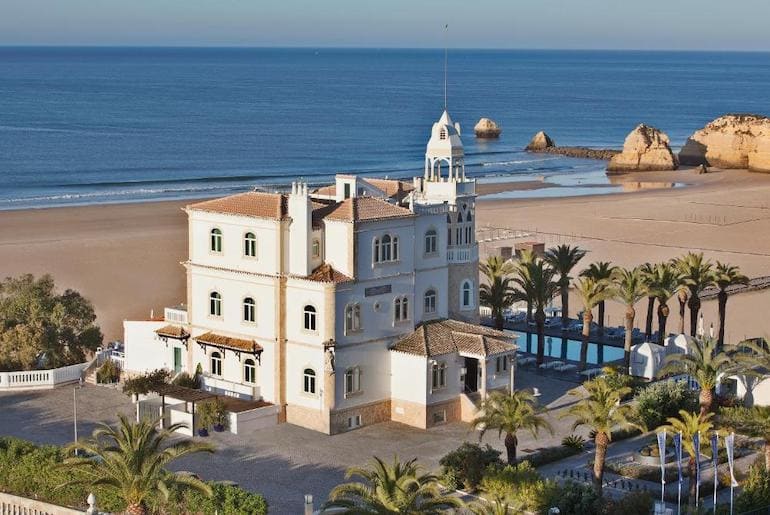 Portimão’s best hotel is a huge mansion overlooking Praia da Rocha. The beachfront location is perfect, but it also stands out for the interior, which preserves much of the original architecture of the early 20th century, including beautiful tile panels and stained glass. The 38 rooms are contemporary but with a retro touch. Outside it’s just as inviting, with a swimming pool and a rooftop restaurant with sea views. This restaurant has a Michelin star, and there’s also a wonderful spa. 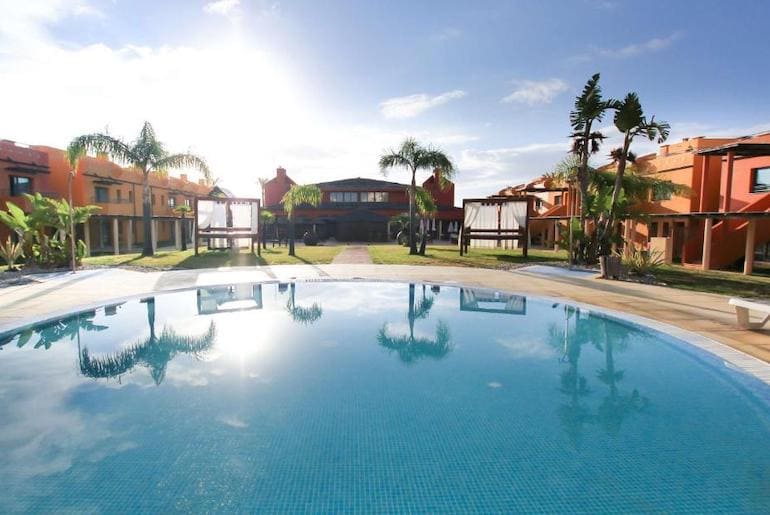 The marina is a good place to stay, because it has restaurants, bars and beaches nearby. This hotel is divided into studios and apartments, and many of them overlook the marina. It’s a favorite of families, who can prepare meals and have the kids swim safely in the children’s pool and play on the playground. There’s also a seawater pool for adults, a fitness center, and two restaurants offering international cuisine and panoramic views. 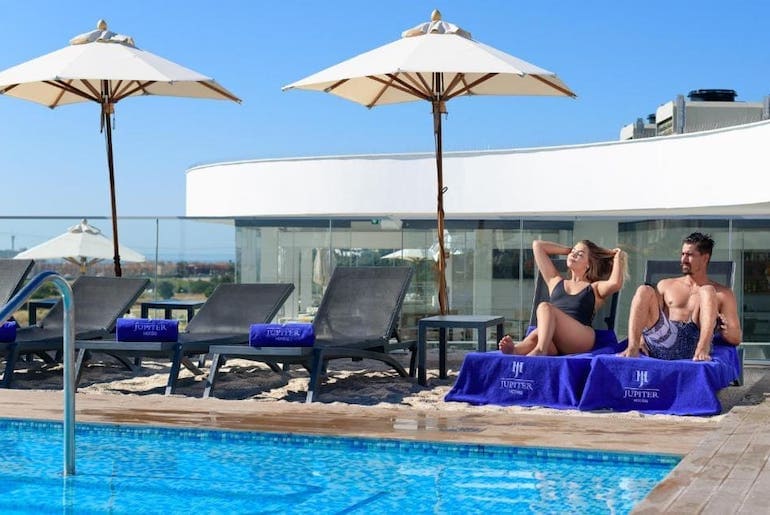 Where there once was a fish canning factory is now this “boho chic” hotel. As the sinuous façade suggests, it’s very much a contemporary hotel. It has 150 rooms, all with balconies, and about half facing the Arade River as it approaches the Atlantic. It’s for adults only, and caters to couples, with a spa with indoor pool, and a rooftop with a bar, a restaurant and an infinity pool. Praia da Rocha is a short walk away. 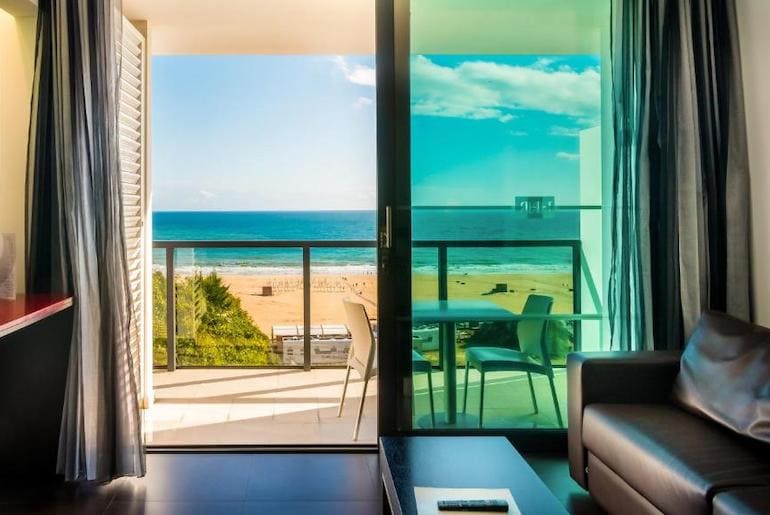 This highly-rated hotel stands by one of the main accesses to Praia da Rocha. It’s made up of spacious suites, some of them accommodating as many as four adults. They all have balconies, and many overlook the beach. Facilities include a fitness room, a massage room, and an outdoor swimming pool. 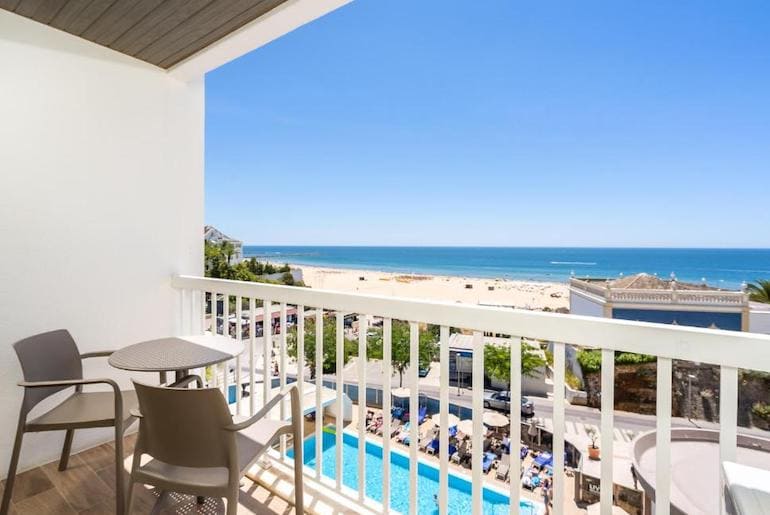 Conveniently located on the main avenue behind Praia da Rocha, this hotel places you just steps from the sand and a variety of restaurants and bars. It too offers live entertainment, show cooking at the restaurant, and the opportunity to sunbathe by the outdoor swimming pool. The interior is inspired by the sea, which many guests can see from their rooms. 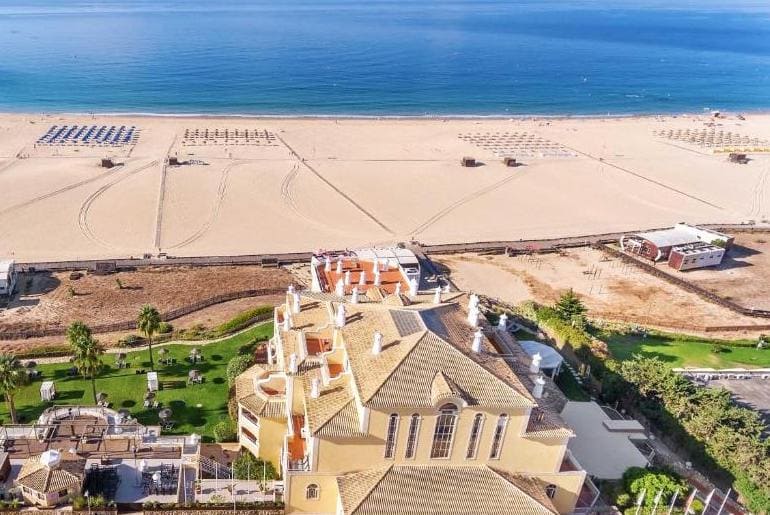 It’s for adults only, so perfect for couples looking to relax in peace and quiet. The architecture and the décor of the common areas have a romantic inspiration from the East, but the rooms are mostly contemporary. It overlooks Praia da Rocha, and there are sea views from most of the rooms (which all have balconies) and from the panoramic pool deck and garden. 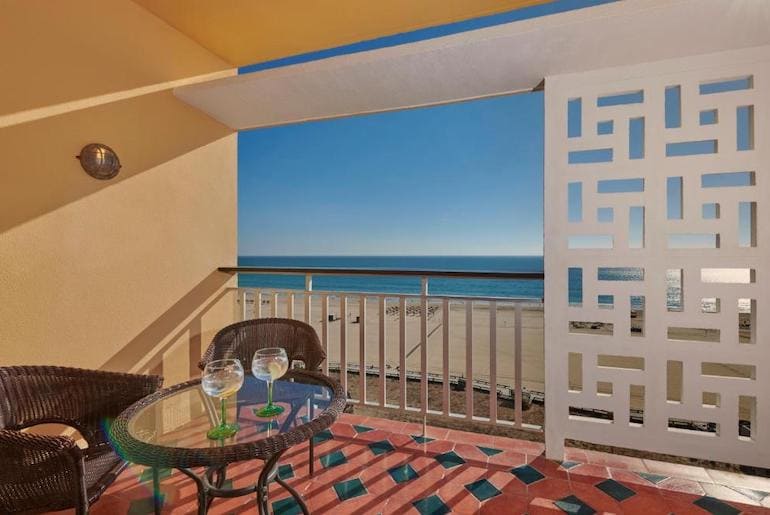 This huge hotel with 208 rooms stands right on Praia da Rocha and houses a casino. Half of the rooms face the avenue, and the other half have balconies facing the beach. The two outdoor pools are on the beach side, while inside is a restaurant, a fitness center, and a spa with a sauna. In addition to the gambling rooms, the casino also offers live music and entertainment. 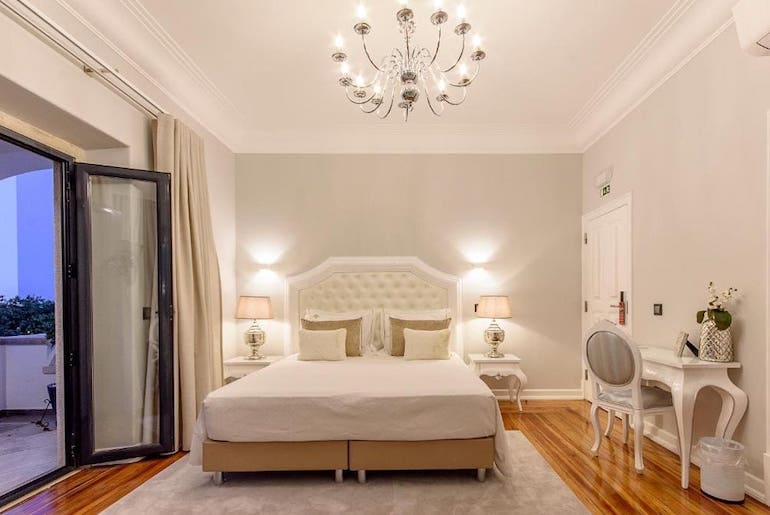 If you prefer smaller hotels, stay at this villa which has just 10 rooms. All of them are decorated in a romantic style, as is the cocktail bar. It’s around the corner from a number of restaurants, and the beach (Praia da Rocha) is a few feet away. 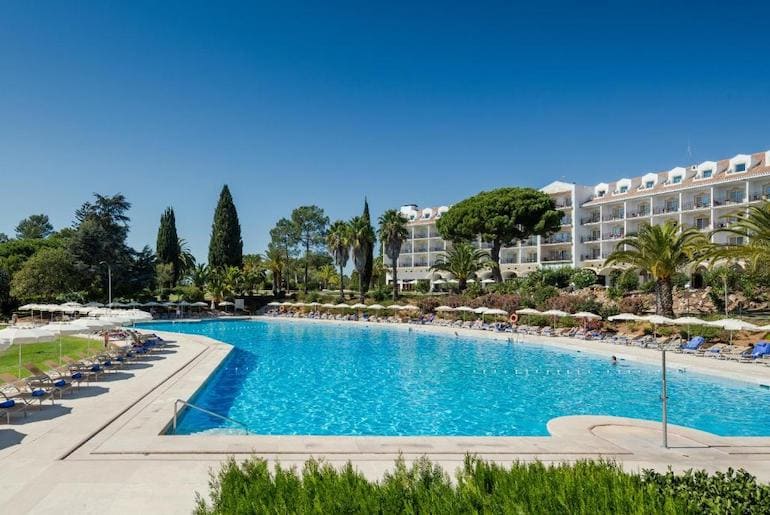 This is the only resort in Portimão. Although it’s 10 minutes from the coast (on a complimentary shuttle, available from June to September), it offers access to an exclusive area on Alvor Beach, with loungers and a restaurant on the dunes. It has its own 18-hole championship golf course and two smaller 9-hole courses, a health club, a kids’ club, five tennis courts, and one of the largest outdoor swimming pools in Algarve. In addition to the restaurant at the beach, there are four restaurants at the resort and a bar for cocktails and live music. Most of the bright rooms have balconies overlooking the pool. 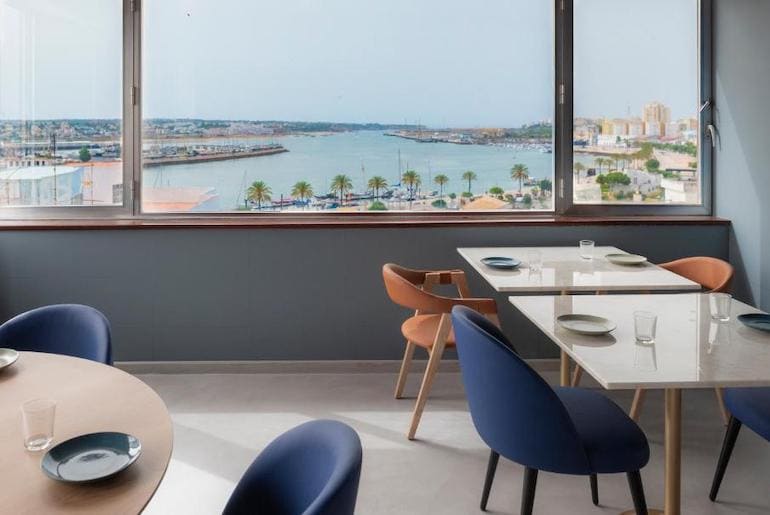 The 66 rooms of this budget hotel are basic but bright and with a contemporary design. The central location is convenient for the cultural attractions and public transportation. The restaurant on the top floor serves Portuguese cuisine and offers a view over the Arade River and the Atlantic.