Olhão tourism guide, how to get there and where to stay 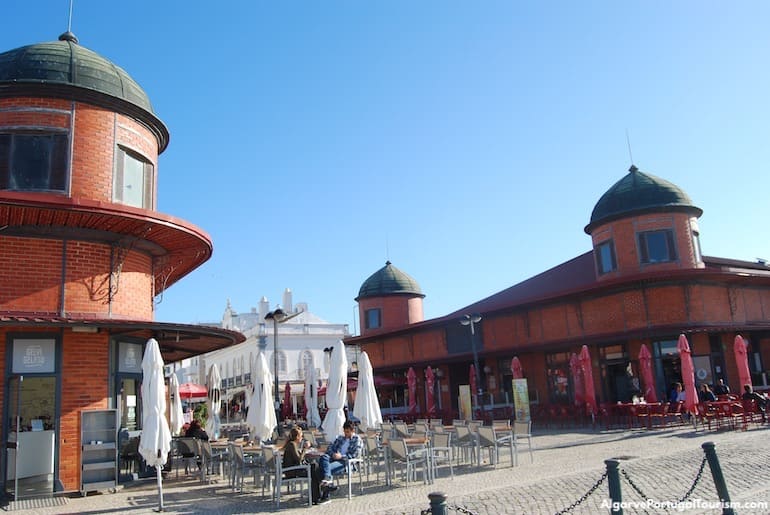 Olhão grew as a major fishing port in the 20th century, but it already was a sizable village in the 1600s. The fishing tradition goes back to Roman times, as revealed by traces of fish salting factories in the area. Today, it’s famous for having the Algarve’s largest fish market, and, unlike many former fishing towns in the region, a significant percentage of its residents still works in the fishing industry. The tourism industry is also flourishing, as the city is the gateway to islands of the Ria Formosa Natural Park. The popularity of the beaches on these islands grows every year, and there are regular ferries from the port.

The narrow streets of the largely-pedestrianized center lead to a couple of whitewashed churches topped by stork nests, and are lined with cube-shaped houses with rooftop terraces, said to have been inspired by North African architecture. On the waterfront is a number of seafood restaurants with outdoor seating, attracting tourists throughout the year. Each August (usually on the second week), the city hosts the lively “Festival do Marisco,” or “seafood festival,” offering fresh seafood and live entertainment for several days. 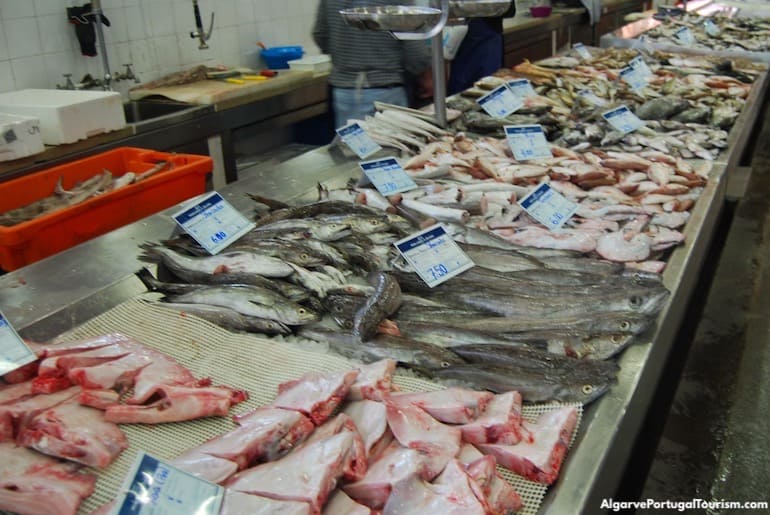 Built in 1916, this large market is Olhão’s main attraction besides the beaches. It’s where locals go each morning for fresh produce and the catch of the day, and where tourists go to experience a typical Portuguese fish market and see all kinds of fish. It’s made up of two identical red brick buildings (pictured at the top of this page; one for the fruit and vegetables and the other for the fish), surrounded by outdoor cafés. The best day for a visit is Saturday, when there are extra stalls selling traditional products from the region. 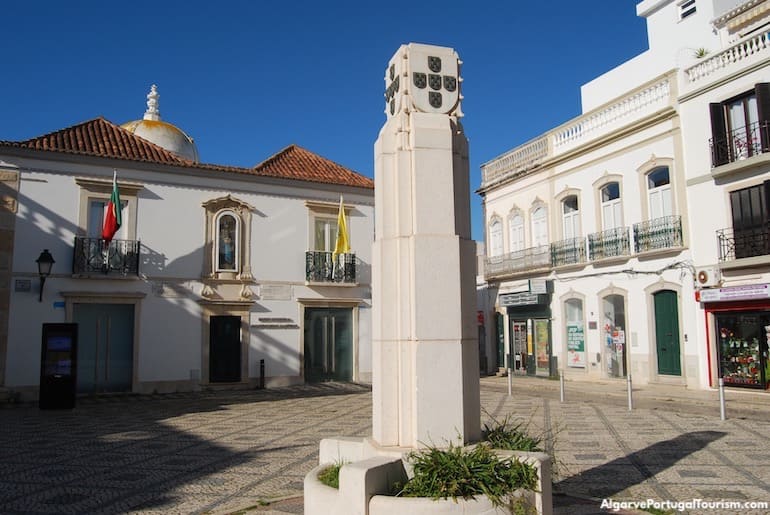 A building from 1771, which originally housed services for the local fishermen (such as a pharmacy and a butcher shop), is now a small museum explaining the history of Olhão. There are permanent displays of archaeological finds, as well as temporary exhibitions related to local culture. Outside is a monument inaugurated in 1931, to celebrate the men who led the revolt against Napoleon’s troops in Olhão, in 1808. 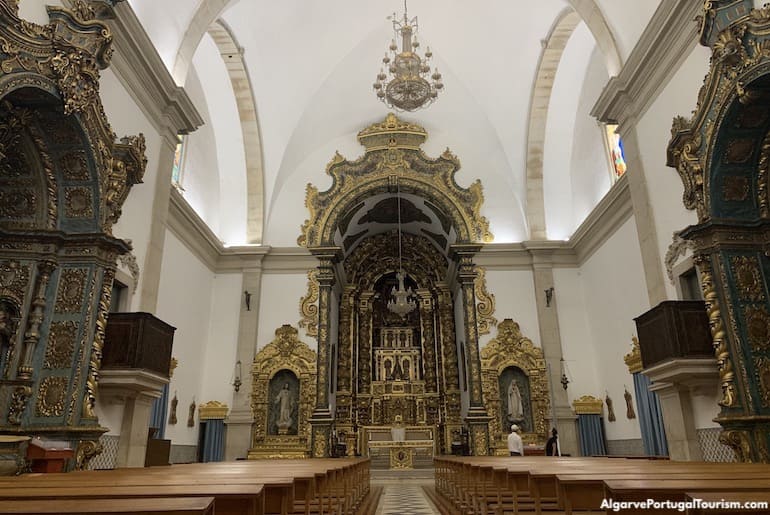 Facing the Municipal Museum, in the same square, is Olhão’s main church and most significant monument. It opened for services in 1715, but was only completed in 1722, thanks to donations from the local fishermen. The interior is surprisingly rich, with five gilded chapels reflecting the baroque style of the early 18th century and a ceiling decorated with a fresco. 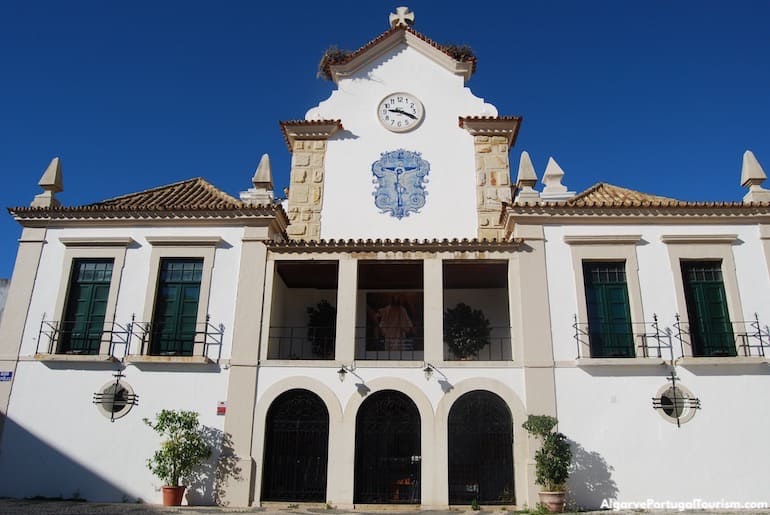 Right behind the Igreja Matriz is this large chapel with a tile panel on the façade depicting Christ on the Cross. It’s where many locals go light a candle and say their daily prayers -- a tradition that started with fishermen’s wives on stormy days, hoping for their husbands’ safe return from the sea. 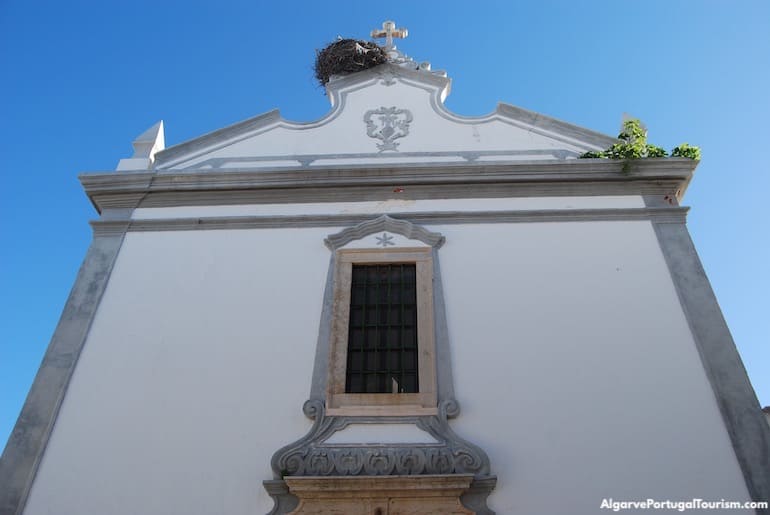 When it was built in the early 1600s, this was Olhão’s first stone building. At that time, the city was a tiny community with nothing but fisherman huts. It’s a modest church, featuring a small dome and an altarpiece with an image of St. Lucy. Its rooftop is a favorite spot for storks to build their nests. 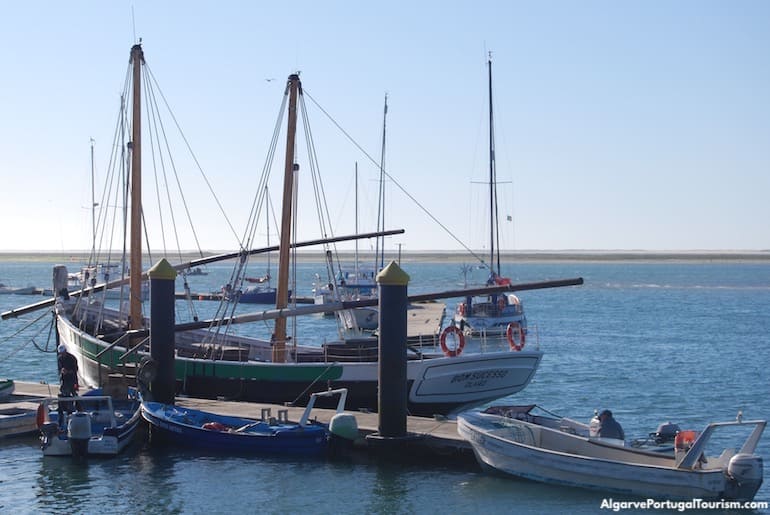 Anchored at the marina by the market, this is a replica of a boat that took a group of 17 local fishermen to Brazil in 1808. These men crossed the Atlantic to inform King João VI, who had escaped to Rio de Janeiro when Napoleon invaded Portugal, that the people of Olhão had managed to kick out the French. Measuring 20 meters in length and 5 meters in width, it’s hard to believe that such a small boat made such a voyage. It took three months, but it made it to its destination, and the king rewarded the fishermen by making Olhão a town independent from Faro. 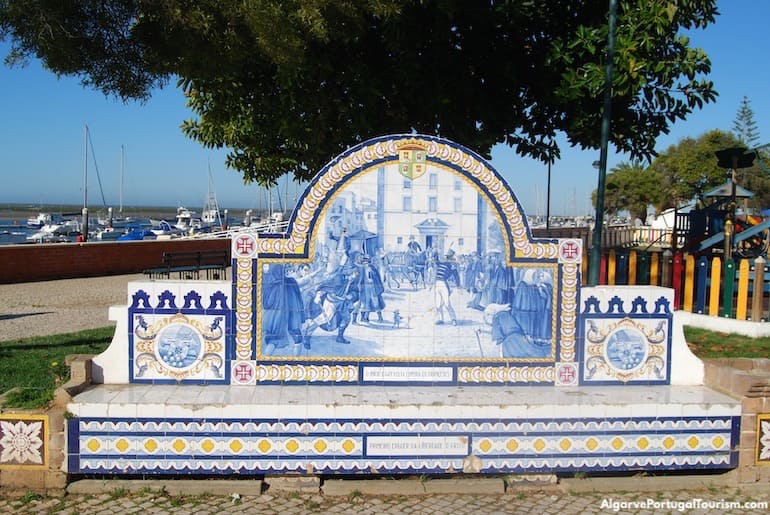 Next to the market, on the waterfront, is this park which serves as a meeting point for locals and as a stage for cultural events. It preserves an old bandstand and benches decorated with tile panels illustrating episodes from local history, like the revolt of the people of Olhão against the French and the arrival of the Bom Sucesso boat in Rio de Janeiro. 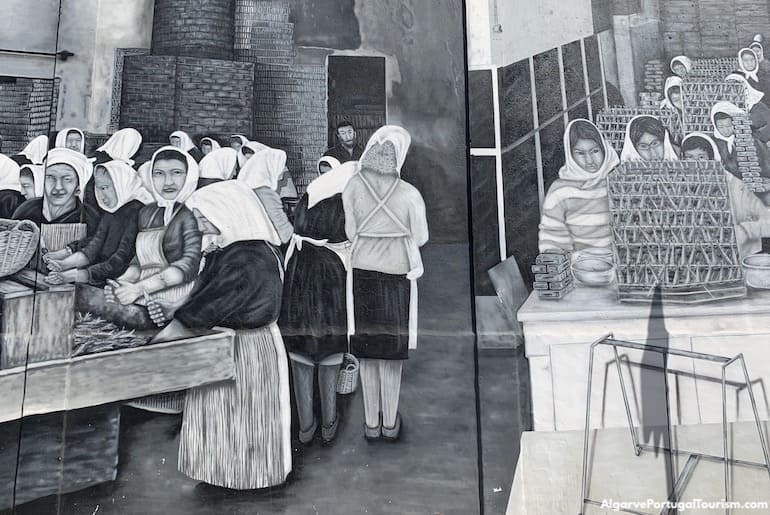 The façades of the former canning factories in the center of Olhão have been completely covered with murals. They depict scenes of local life in the heydays of Olhão’s fishing industry, and are in black and white, giving the impression of old photographs. 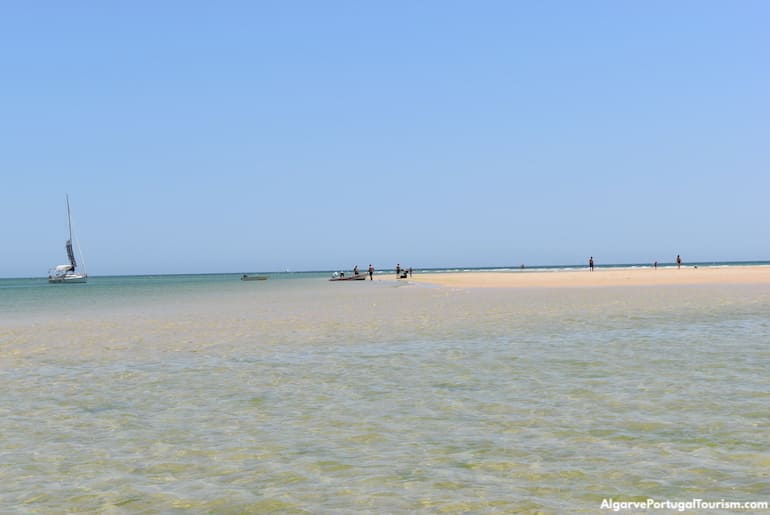 Olhão’s beaches are in islands of the Ria Formosa Natural Park. To know more about this protected area, head to Quinta de Marim. The site is a little neglected, but you’ll be able to follow paths and boardwalks through 3 kilometers (almost 2 miles), observing different animal species in their natural habitat, and also get to see an archaeological site with Roman remains from the 4th century. This is also the breeding center of the Portuguese Water Dog, a breed made famous when U.S. President Barack Obama chose it for the White House dog (he ended up having two, a male and a female). In a renovated chalet, that belonged to a former mayor of Olhão, visitors can know more about environmental protection, through exhibitions and events held in an auditorium.
For the beaches, see the Olhão beaches guide.

How to Get to Olhão 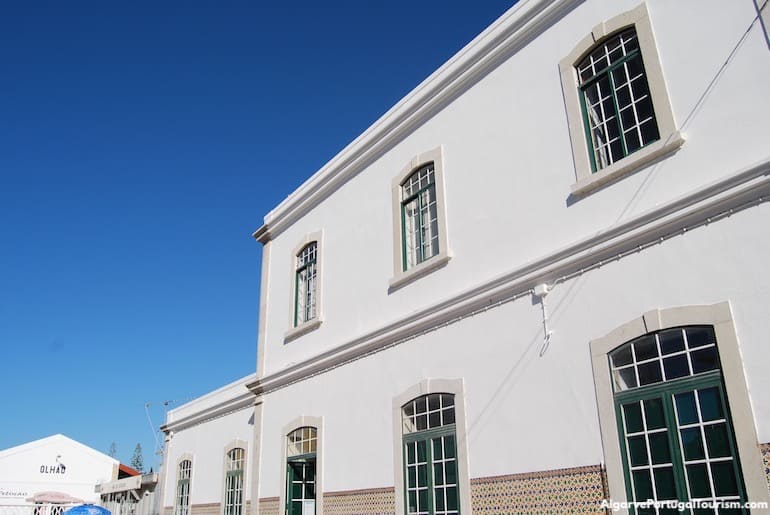 Olhão is 15 minutes from Faro, heading east on road N125. It’s just 10 minutes by train, and there are about a dozen departures per day (check the times at the cp.pt website). Buses (numbers 63 and 67, operated by Vamus) also connect the two cities, taking between 20 and 25 minutes. The bus terminal in Olhão is on Rua General Humberto Delgado, in the city center. If you’re coming from Tavira, the drive takes about 25 minutes, heading west on highway A22 or road N125. The train from Tavira also takes about 25 minutes, and there are also a dozen departures per day. It’s also possible to take Vamus bus 67 from Tavira, but it takes about 40 minutes and there are very few services per day, so the train is the most recommended option. 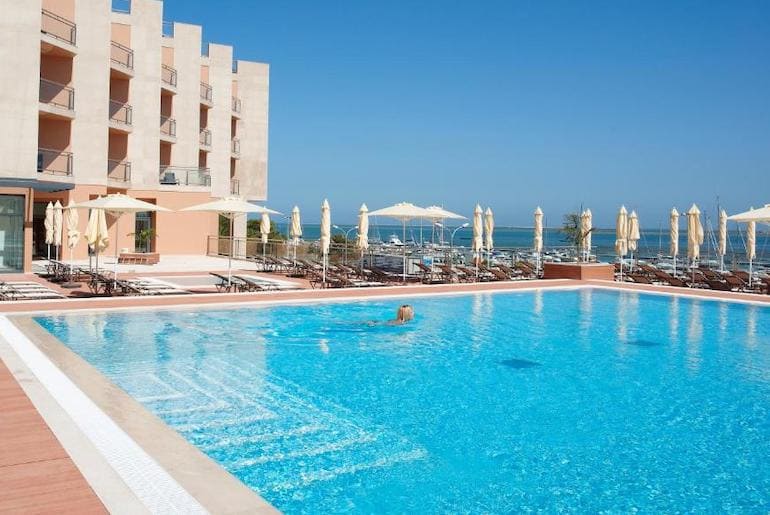 The best hotel in Olhão is located on the waterfront, and many of its spacious rooms face the sea, as does the outdoor pool. There’s also an indoor pool that’s part of the spa. At the two restaurants, you have the choice of local or international cuisine. The ferries to the islands, as well as the city’s famous market, are a short walk away. 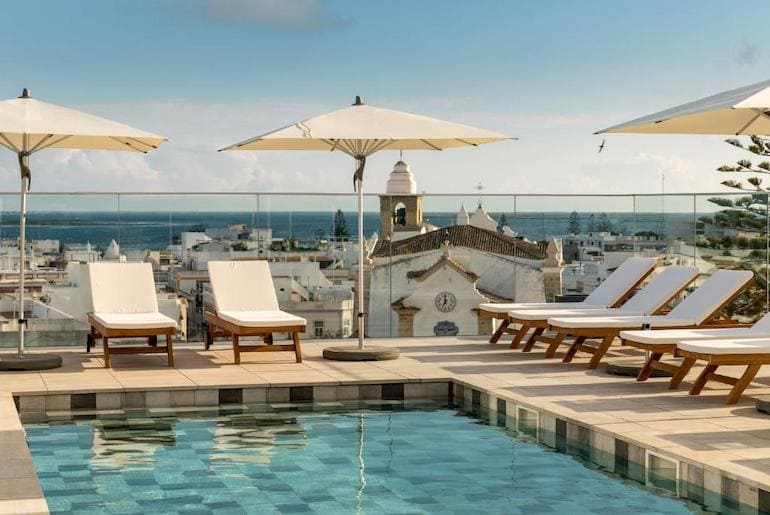 It’s right in the center, on the main avenue, and offers a great 360-degree panoramic view over the city from the rooftop terrace, where there’s a bar and a swimming pool. The 67 double rooms feature a contemporary minimalist design, as do the common areas such as the breakfast room. 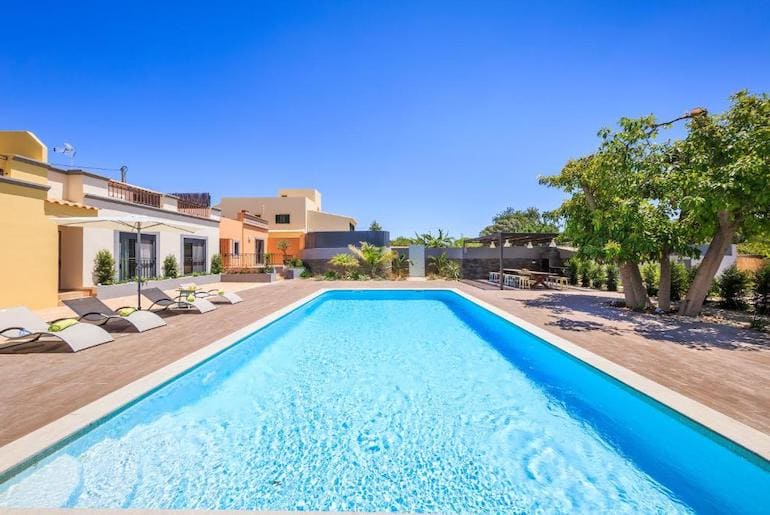 Located just outside the city (about a 10-minute drive from the port), these villas are quite beautiful, mixing the traditional and the contemporary in the architecture and décor. They have two, three, or four bedrooms, and are a good value for those traveling in a group or as a family. An outdoor swimming pool is accessible to all guests. 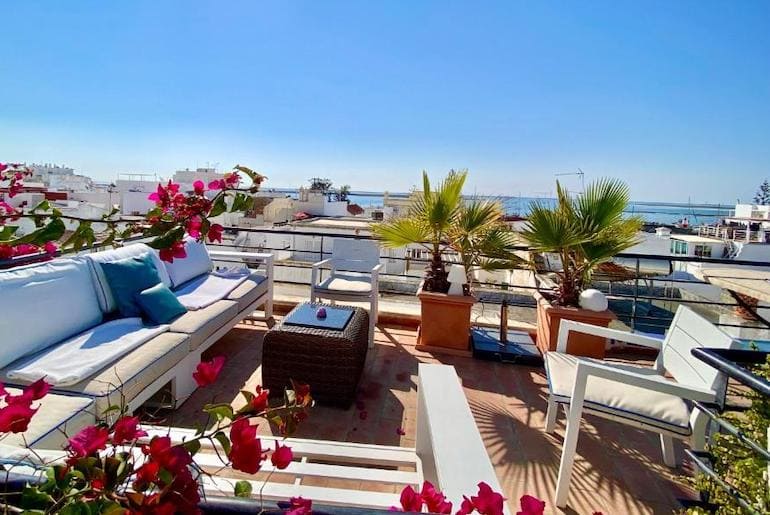 This guesthouse has double rooms and an apartment, some of them with a terrace or balcony. Conveniently located in the Old Town, close to the market and the pier, it’s an excellent option for those on a budget. 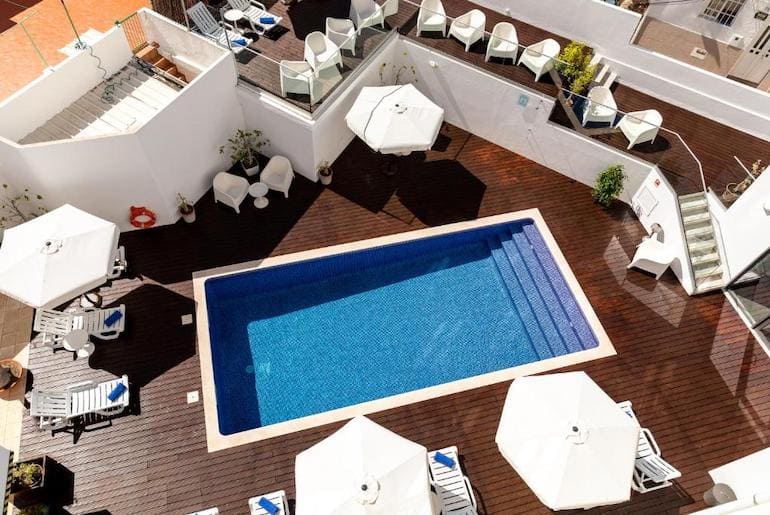 Found close to the train station and the center of town, this is a highly-rated 3-star hotel. It opened in a renovated building in 2016, and features a contemporary interior, an outdoor pool, studios with fully-equipped kitchenettes, and double rooms. 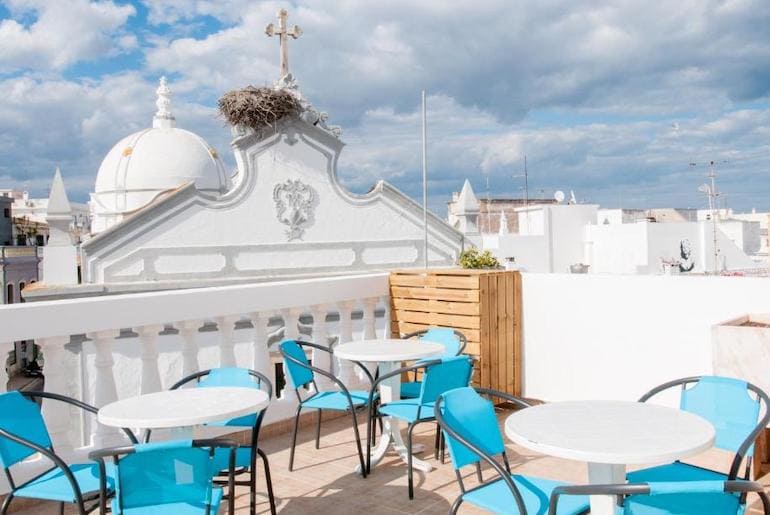 If you’re looking for a hostel in Olhão, this is the one. It’s right by one of the city’s historic churches, and named after the storks seen on the monument’s rooftop. You can almost touch their nests from the hostel’s terrace, where guests relax in the sun. Inside, there are double rooms with private bathrooms and dorms with shared bathrooms. 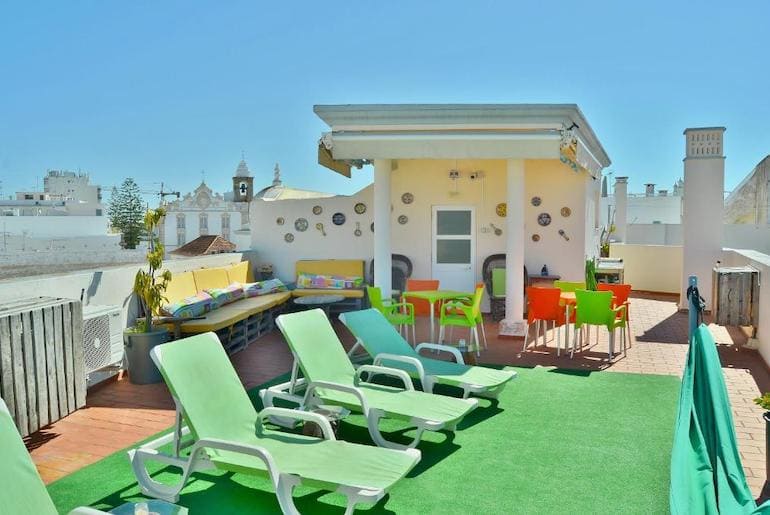 The wonderful rooftop terrace, the central location, the cleanliness and the welcoming staff, all make this one of the favorite places to stay in Olhão. It offers rooms of different sizes and a 2-bedroom apartment. 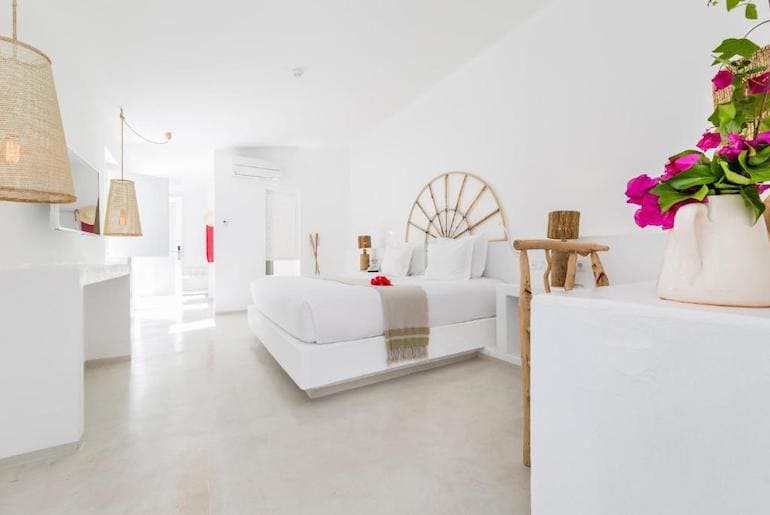 Just a 15-minute drive from Olhão, this is one of the most beautifully-designed hotels in Algarve. It’s a romantic farmhouse with a boho-chic style, divided into 55 rooms and surrounded by beautiful gardens. There are two outdoor pools and a refined restaurant serving regional cuisine. 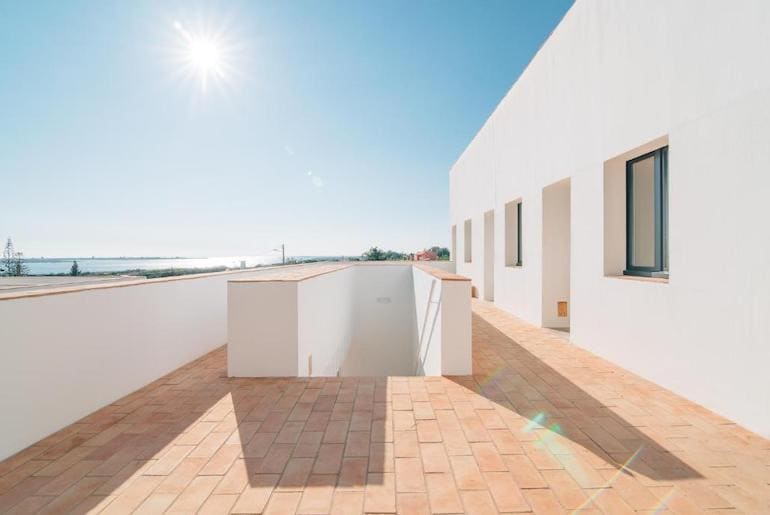 Less than 15 minutes from the center of Olhão, this is another highly-rated and tastefully-designed property. It consists of two buildings with nine rooms with private terraces, and serves breakfast using fresh local products, some of them from its own organic garden.